“Did something happen to you?”

I intend this as a general celebration of the Netflix series, Shetland, so I will present just a little information about the series generally.  Here’s the blurb from imdb.com.

Created from the novels by award winning crime writer Ann Cleeves, Shetland follows DI Jimmy Perez and his team as they investigate crime within the close knit island community. In this isolated and sometimes inhospitable environment, the team have to rely on a uniquely resourceful style of policing. Set against a hauntingly beautiful landscape, Shetland is based on the best selling books by Ann Cleves.

Bette and I have watched everything in this series that is available to watch and enjoyed it—some of it, we enjoyed very much.  But I wouldn’t write about a TV show I enjoyed and dismissed and, in fact, there is one crucial transformation that has caught me and I find my mind going back to it over and over. And that is, actually, the kind of thing I want to tell you about. 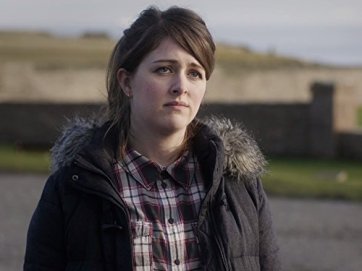 It concerns, Alison Macintosh, called “Tosh” on the show, and played by Alison O’Donnell. [1]  The third season comprises six episodes making a single story.  I mention that because unlike the previous seasons, there is a long time between the beginning of the story and the end.

Early in the first episode, they introduce Lowrie, (Jamie Michie)  a weird guy, an artist whose art is about death and darkness.  He is very off-putting.  He is withdrawn as well, so when he shows up at headquarters in the next episode, inviting Tosh to have a drink with him, she is horrified and turns him down flat.  We con’t condemn her for that.  We don’t know this early in the story that he isn’t a psychopathic murderer and we share Tosh’s revulsion for him as a person and for the prospect of his wanting a date with Tosh.

Early in the fifth episode—this is at least six hours of TV watching later—he shows up again at the station, but everything has changed by now.  Jimmy Perez, Tosh’s boss, (Douglas Henshall) has begun to tangle with a very scary man on “the mainland,” as they say, meaning the contiguous parts of Scotland, and this man has had Tosh abducted and raped and I’ll give you the reason for that as Tosh gave it to Jimmy.  “He said it was a message you couldn’t ignore.”

Some of the best acting in the show happens in this part of the story.  Tosh is simultaneously angry and humiliated by what was done to her.  As a Detective Sergeant, a trained professional, she is ashamed of how badly she misread the situation.  Jimmy confronts her with a very personal truth instead, that she has done nothing to be ashamed of and that the guilt is all on the bad guys.  Oddly, that didn’t go down very well with Tosh, and when I finish the story of Tosh’s recovery, I want to come back to this and ask why that might be.

Tosh comes directly back to the office after undergoing all the testing the case might eventually need and she is working productively on the case.  She is barely holding it together and all her colleagues know that.  She is right on the edge.

At that point, Lowrie sends a present to her at the office.  It is a very nicely drawn picture 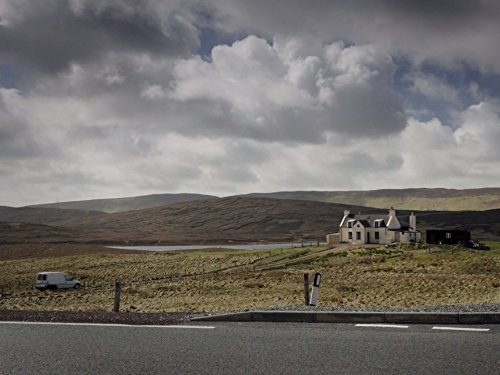 of her and a bottle of wine is a fancy-looking bag.  She is outraged.  To be fair, Lowrie gets more than his share of the outrage because he is the first one to offer himself.  She goes to his house full of anger.  She yells at him.  He offers her a seat.  She yells a little more and then just sinks into the chair, staring vacantly into space.  Lowrie gets her a cup of tea, puts it on the table beside the chair and says he will be in the next room.

And then a really wonderful thing happens.  Tosh goes to sleep.  Sound asleep.  We are reminded that she cannot have been sleeping well since the assault.  They don’t show us that, but when we see her collapse into sleep in the safest place she has been since the assault, we understand.

In the next scene that matters, Tosh goes back out to Lowrie’s house.  He gestures to the bad she is holding and calls through the window, “Fancy a drink?”

Something wonderful has happened to Tosh.  We are not told just what it is.  As a person who attracted to an understanding of the mechanisms by which things like this happen, I am disappointed, but as a someone who appreciates a well-told story, I know the way they did it is better.

Whatever it is that has happened, she is able to sit down at Lowrie’s table and drink with him the beer she brought and make a perceptive observation.  “It must be great,” she says, “to be able to express yourself the way you do.”  She is not addressing him as an odd-looking man or as a completely inappropriate suitor, but as an artist, which is how he thinks of himself.  She knows that she does not have any such avenue for her own self-expression and now she knows that she really needs one.

But it is still true that the things Lowrie paints are dark and difficult, so the next question is, “Did something happen to you, Lowrie?  Is that why you paint the things you paint?”  Tosh can ask these questions because she, too, is someone that “things have happened to” and Lowrie knows it.  Everyone knows it.

Tosh wants to hear Lowrie’s story because she has a story, too.  It isn’t a story she needs to tell Lowrie—not, in any case, more than he already knows—but she is coming from a hurt place and she wonders about his hurt place.  And he tells her.  Simply.  Movingly.

It is a very quiet and satisfying resolution of Tosh’s experience—to the extent that such an event ever gets completely resolved—but it also points back to Jimmy’s attempts to help her get her balance.

At the time Tosh was kidnapped, she was both a police officer and a woman.  The heart of Jimmy’s concern for Tosh is that she was violated as a woman and will feel the guilt and shame that women often feel in that circumstance.  I don’t have any objection to what he is trying to do, but it is notably ineffective, [2] and furthermore, it runs against the emphasis that Tosh is insisting on.  And we, as viewers, are not given much to go on as we try to understand what is taking place in the conversation.

Jimmy says that none of this is her fault.  She is a woman who has been wronged and

bears no guilt.  Tosh says it is her fault.  She missed all the signs.  She is a trained police agent.  She made it easy for them.  All of those are fault-claiming, but they are fault-claiming in her role as a police officer, not in her role as a woman.  It almost seems, as I think back on these episodes, that if Jimmy had said, “You’re right.  You really should have seen that coming,” she would have been relieved.  That doesn’t happen so we don’t find out, but Jimmy continues to play the conversation as if the crucial question is who is guilty.  They are guilty and Tosh is not.  But Tosh responds by insisting that the crucial question is who is competent.  They were and she was not.

Clearly, Jimmy wants the conversation to be about Tosh the woman abused.  Tosh wants it to be about DS Macintosh, who was superbly trained and who, at the crucial moment, forgot some of the most important lessons.  Frankly, I’m not sure which way I feel about it as a viewer and increasingly as a fan.  The writers of the story show no interest in it at all.  Jimmy is all heart and he is a wonderful warm man and a great boss for Tosh.  On the other hand, warmth might not be what is needed right at that point, and I think I would like to follow her lead on how to play it.

She wants to be a professionally trained detective who forgot her lessons and paid the price.  And that might be the very best thing for her. [3]

[1]  I know.  It seemed odd to me, too, to use the actress’s name as the character’s name, but it helps that everyone calls her Tosh.  Except for the ones who call her DS (Detective Sergeant) Macintosh.

[2]  Maybe it was just too early.  Maybe Lowrie’s success in comforting her is mostly because it happens later.

[3]  They do signal troubles yet to come.  Billy runs the office where Jimmy and Tosh work.  He is a big teddy bear of a man and asks, as the case is winding down, whether he can give her a hug.  It’s an honest question from a really good guy.  Tosh says no and Billy accepts it without embarrassment.