This sign was sprayed onto the bike path going down to the east bank of the Willamette River and I pass it several times each week. Until this last week, there was only the brown sign sprayed on the path, but when some wit added the blue sign, I began to think more about it. 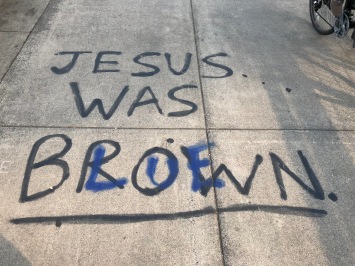 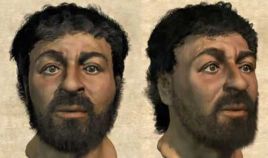 But when we get away from how good it feels, we need to consider what he actually looked like. If you are a brown person living in a predominantly white society where all the white Christians are expressing their emotional affiliation to a Jesus who looks like them, I’d think it would get wearing after a while. All the emotional affiliations would add up to a factual claim and the claim would be this: Jesus was white. [1]  This is the face referred to in the quotation below.

And I think that is where the tagger was coming from who sprayed this little protest on my bike path. It was an emotional protest on his part, as I imagine it, but had he been a forensic anthropologist, he would have expressed the same sentiment.

“British scientists using forensic anthropology, similar to how police solve crimes, have stitched together what they say is probably most accurate image of Jesus Christ’s real face, and he’s not the light-skinned figure many of us are used to seeing.” [2]

I think one of the reasons the sign made me smile week after week is that it is a protest. The tagger feels pushed on. He wouldn’t have to be Christian to feel that the white majority is claiming things they have no right to claim. On the other hand, it isn’t just a protest: it has the appearance of a solid anthropological conclusion. Three little words doing such different kinds of work. 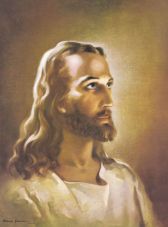 What Jesus looked like is completely immaterial from a theological standpoint, but people who have strong beliefs about Jesus and strong feelings about Jesus might be expected to want to specify what he looked like. That accounts for the sample “ethnic Jesuses”in this essay. When you get far enough away from the issue, it comes to seem odd that we call these other images of Jesus “ethnic” but do not call the one that looks like us “ethnic.” But our own ethnos is the one we take for granted; it is the standpoint from which we look at the others.

And I’m no better, myself. I grew up of Sallman’s Jesus, above. It was “the” picture of Jesus in the same sense that the King James Version was “the” Bible. When I first saw Richard Hook’s face of Jesus (the next one down), I was really struck. I was drawn to it years before I had any idea why. Now I think is mostly the expression on his face that caught me. He looks like he is saying, “Really? And then what happened.” He is also a lot darker than Sallman’s Jesus, and I did know by then that Jesus was a Middle Easterner.

After the sign had been there for a month or so, another kid with another color and 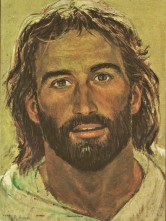 another motive made his mark. “Jesus was blue,” he says. [3] My first reaction was negative because I had been enjoying the “Jesus was brown” sign. To the extent that the first tagger’s real meaning was “Jesus was not white,” the comment that he is really “blue” does the same work. [4] 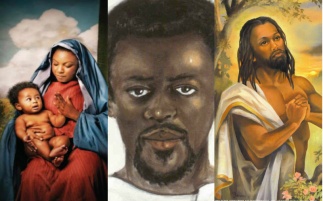 For myself, I like the idea that everyone should feel free to invent an image of Jesus that would be at home in their own ethnic group. It is a claim of affiliation and if the Incarnation means anything at all, it means that. On the other hand, I don’t think anyone but the experts should feel free to make up factual claim about what Jesus did look like. And, considering only the facts of the case, what Jesus looked like really doesn’t matter. When we picture him as tall and handsome and masculine, we are only projecting the values of our culture onto the story of Jesus. No one really thinks that God has definitively manifested Himself to be a Middle Easterner.

[1] I wrote what turned out to be a provocative post a few years ago asking whether Jesus was short. There is only one text that might bear on Jesus’ height (Luke 19) and it is normally read as if it had to do with the height of Zaccheus, a local tax collector. Actually, the verse can be read either way, so my post asked just who it was who was short and I ran into a bunch of people who were perfectly willing to have a Jesus that was ugly, but were not at all willing to think he was short.
[2] That’s what Sean Allocca, editor of a site called Forensic Anthropology, said just before Christmas in 2015. I have no idea what he means by “accurate image.” I think “plausible image” would have been plenty.
[3] A week later, someone came by with white paint and sprayed “white” over the “blue.” It might have been whimsy. Then again, brown and white are shades we associate with race and “blue” is not.
[4] And surely he was blue sometimes. A man of sorrows and acquainted with grief?