It won’t take long to get to where I want to go, but let’s start with this question.  Was Jesus tall and handsome?  Christians seem to want Jesus to be represented as an exemplar of whatever passes for masculine beauty in any particular culture.  There’s nothing really remarkable about that.

“British men are the bravest and British women the most beautiful in the world, “an old British gentleman told a very young C. S. Lewis.  “But” replied an amused but tolerant Lewis, “all nations think their men the bravest and their women the most beautiful.”  The old man was undaunted.  “I know” he said confidentially, “but in Britain, it is true.”

So there’s nothing remarkable about the attitude.  Once upon a time, I had a mother-in-law who sincerely disliked my favorite picture of Jesus.  That’s the one to the right, by Richard Francis Hook.  She grew 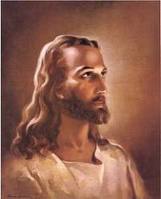 up with the one on the left

, by Warner Sallman.[1]  Neither one tells us much about what the actual historical Jesus looked like.  I have seen pictures that represented Jesus as meek and mild and as a raging Zealot; I have seen him with light skin and with dark skin; with a straight Greek-statue nose and with a large hooked nose.  I have never seen a picture of him as a short man.

Why?  Because we are a lot more like the old British gentlemen than we usually like to think.

So is there really any reason to think that Jesus was short?  Of course there is.  Do you remember this story, from Luke 19?

He entered Jericho and was passing through.  And there was a man called by the name of Zaccheus; he was a chief tax collector and he was rich.  Zaccheus was trying to see who Jesus was, and was unable because of the crowd, for he was small in stature. 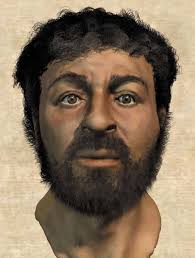 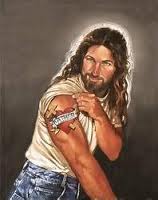 And it doesn’t actually matter.  Except that Christians made a good deal of use of the “Suffering Servant” passages in Isaiah.  Opponents of the early Christians maintained that Jesus couldn’t have been the Messiah because there are passages where the Messiah wreaks God’s vengeance, establishes justice, puts the enemies of Israel under his feet.  You might want to take a peek at the Magnificat of Mary in Luke 1 for a tidy little summary.  Christians retorted by citing passages like this one from the prophet Isaiah, Chapter 52.

Like a sapling he grew up before him, like a root in arid ground. He had no form or charm to attract us, no beauty to win our hearts;  he was despised, the lowest of men, a man of sorrows, familiar with suffering, one from whom, as it were, we averted our gaze, despised, for whom we had no regard. 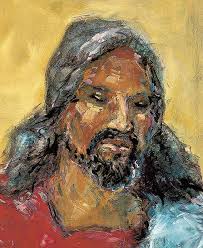 As modern Christians, we have no trouble accepting the essential unattractiveness of Jesus, especially as Lent crawls slowly toward Good Friday.  Except he was not short.  Not.  Not.  Not.  He might have been ugly, but at least he was tall.

Sometimes I wonder why we don’t just guffaw in the middle of a church service when dilemmas like this occur.  It might be good for us.

[1] About my picture, she always said that at least Jesus would have combed his hair.  What I always liked about my picture is that it represents Jesus as being interested in whatever is going on at the time.