Depth in a Superficial Story

I want to tell you two stories today. They are related, so I don’t want to put them into separate essays. The first is just personal. It has to do with the transition my mind made from a superficial made-for-TV movie to an intriguing question. And then, while the question (still unanswered) is holding my attention, I discover a deeply buried but very important theme. In the second part of this combined post,  I tell you about the theme and go on and on about it.  It is about healing.

The first story is about the made-for-TV movie that I saw on the Hallmark channel. I don’t want to recommend the movie. My friends would never forgive me. [1] I wouldn’t have watched it myself had I not walked in on it when Bette was watching it and sat down with her to watch the end.

I have a real resistance to Hallmark-channel movies and that is what brings me to today’s dilemma. The show I watched with Bette is called 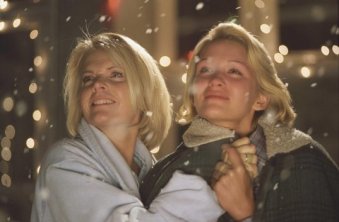 A Christmas Visitor. I have seen several of the main actors in other, more demanding parts, and I know they can act. It is not their fault that this movie doesn’t require them to do any. There is “the dad” (William Devaney); and “the mom” (Meredith Baxter); and a son and a daughter—and a “visitor.” That’s pretty much it.

So here’s the dilemma. When I watched (the last part of) it with Bette, I realized that this movie was working with a metaphor I needed help with. Of course, the neat confluence of my need for help in thinking about a metaphor and the basis of the movie in that same metaphor does not make it a good movie. But it does make it a movie that I am going to be attracted to.

The metaphor can be described in any number of ways. I have two in mind. Here is the one that came first to my mind: “God was, in Christ, reconciling the world to himself.” (The language is Paul’s in 2 Corinthians 5:19) There is nothing religious about the movie. I would say that this connection I made is really just a religious application of the theme of the movie. So the second use of the metaphor I had in mind was “agency,” (literally, “doing-ness) and I have a great interest in personal agency. What does it mean , for instance, to say that one person acts by means of the actions of another person?  What does it mean when you reject agency, yourself, and remain passive and miserable?

“God was…reconciling the world to himself” is a very serious claim. It is, in fact, so serious that it gets in the way of working out what “agency” means. Here is another one; this one doesn’t have that problem. And to save having to look it all up and get the names right, I’ll just tell it the way I remember it.

This is from an old Rock Hudson/Doris Day/Tony Randall movie; probably Pillow Talk. Hudson is a big guy and Randall a little guy. Little, but rich. They get into a conflict and Randall, the little guy says to Hudson, the big guy, “How would you like a punch in the nose?” They are at their cars. Hudson is sitting in his; Randall is standing by the back seat of his limo. “I’d like that,” says Hudson, starting to get out of his car. “George,” says Randall to his chauffeur, “Give that man a punch in the nose.” George unfolds himself from behind the steering wheel, all 6 foot 5 and 280 pounds of him. It is not the scenario Hudson thought he was accepting, so he gets back in his car and drives off.

I said it wasn’t serious, you will remember. But is still about agency. Randall would have been the agent (actor) who caused a fist to hit Hudson’s nose even though it was George’s fist. Stay with me. Randall was, “in George,” hitting Hudson in the nose.

Very briefly, the Boyajian family allowed their son John to enlist in the army and become a green beret. He was killed in Operation Desert Shield and the rest of the family, as we meet them at the beginning of the movie, has yet to recover. On Christmas Eve, George Boyajian, the father, picks up a hichhiker named Matthew and, having determined that he has nowhere to spend the night, brings him home with him.

From the time Matthew walks into the house, odd things begin to happen—all of them good. George has decided that what he really wants for Christmas is healing in his family. That happens. The daughter, Jean, wants her breast cancer to go away. That happens. Carol, the mother, wants to feel close to her son, John, again. That happens. And then “Matthew” goes away, having revealed himself in the last 15 seconds of the movie as their son, John, who is indeed dead, as the army has informed them, but who is, nevertheless, “in” Matthew. John is, in fact, “the Christmas visitor” although no one knew it

So now I have seen this not very good movie many times, reaching deeper into the characters and the dialogue and finding things that fascinate me. The movie has helped me keep this odd inquiry of mine alive. I have continued, by using the movie, to wonder just what “in” means in the gospel accounts of the life of Jesus.

But as I have watched the movie, I have stumbled on another theme that attracts me and it is tracking down that second story that I have in mind for today. It is “healing.” George, finally, has had enough and does two important things. First, he clearly asks his wife and daughter for “healing.” That’s what he wants this Christmas. Second, he goes out and does a bunch of Christmas things: stamps, lights, a tree, etc.

Jean, the daughter, is a victim of her parents relentless mourning for her brother John and also of a recently diagnoses breast cancer. The story doesn’t quite come to saying that Jean is welcoming the cancer, but it is true that she needs to give her cooperation to “Matthew” so he can heal her.

This “inner healing” is a difficulty for scriptwriters, so they have arranged for a much

more visible healing. Jean has been rejecting, or at least has not been enjoying, memories of old times with her brother, John. The two kids are shown in a flashback, decorating the tree and and a direct result of their playing round, breaking one of the five points of the star. John, still in his character as “Matthew,” heals the star and in that way restores the memory to Jean. [3]

Carol is the most interesting one to me and she is the one whose healing first caught my interest. Here is the little sermon from “Matthew” that does the job.

When we lose someone we love, it doesn’t mean they’re not with you anymore. You just have to find them in a different way. John’s spirit is here. It’s everywhere. It’s in this house. It’s in your heart. Just don’t push him away. Embrace him. You’ll always have that.

Notice “just don’t push him away.” This is something Carol has been doing. It is not something we can see as viewers and if we did see it, we would excuse it because she is “a grieving mother.” She excuses it in herself on those grounds. But “Matthew” IS John. He is the one she lost. She doesn’t know that, but we viewers do. And knowing that gives an extra dimension to what “Matthew” says as if we are hearing every single note as a chord.

Just before “Matthew’s” little sermon about loss, Carol says to him that it is an awful thing to lose a child. Matthew responds, “I understand it’s a great loss.” Carol responds, “It’s an unbearable loss.”

The point of that exchange, I see in retrospect, is to help us see that Carol sees herself as someone who has been done to. She is passive.  She has no agency of her own and the fates have done terrible things to her. When “Matthew” says, “Just don’t push him away,” Carol begins to see that that is what she has been doing.  She has been an actor, has exercised her agency.  And it was to push John away.  And when she sees that, she sees that “healing” is going to require that she stop pushing him away. And that is what she does. When she returns his “Merry Christmas,” we know that she has found a way to move on.

And when everyone has been healed, “Matthew” moves on. In the final roadside moment with George, George says, “Why did you come to us?” And we begin to think that he knows who he is talking to. “Because you were right,” says “Matthew,” “It was time.” 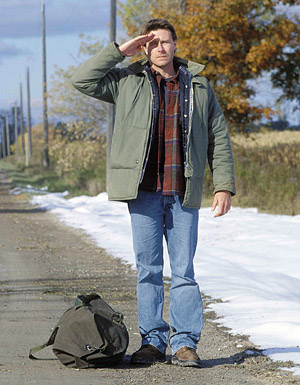 “It is time for healing” is what George said back at the beginning. And John knows that. We don’t know how he knows. And because he knows that, John comes to them as Matthew. John is credible as Matthew, but just barely. He knows too much and even after he explains everything away, the Boyajian family is not quite convinced.

But because George knows, John’s last line to him is, “Merry Christmas…Dad.” Then, as he walks away, he gives this salute. And then, briefly, becomes John in every way. He looks like John. He salutes like John. And then he turns away and becomes “Matthew” again, just before he disappears.

[1] This “recommendation” stuff is not for sissies. I recently recommended a wonderful movie called Tangerines to some old friends. It is about the Abkhasian rebellion in the former Soviet state of Georgie and it is a terrific anti-war film in which there is not a single line condemning war. Unfortunately, my friends went to see Tangerine. Here is the summary of that movie from imdb.com: A working girl tears through Tinseltown on Christmas Eve searching for the pimp who broke her heart. My friends still look at me funny when I recommend a movie to them.
[2] George says, early in the movie when it is too early to know what it means, “We’ve done this long enough. It’s time for us to get back to Christmas” (or words to that effect). In the last scene, George, who known, now, who “Matthew” asks, “Why did you come to us.” And “Matthew” replies, “Because you were right. It was time.”
[3] “Matthew” finds the broken point in the cardboard box and he and Jean glue it back together. Then he “finds” a battery in the box and puts it in the star and when they put it on the tree, it lights up. Everything “Matthew” does strains credulity just a little, but he is a healing presence and no one is willing to reject him. So they “believe” everything.