I am teaching a Bible study with a couple of old friends.  That will happen in just a few hours.  My friend Fran has a dramatic flair and her idea for today was to pass out the parts of the Infancy Narrative that occur in Luke’s account.   Not Matthew’s account.  No borrowing!  So much as one Wise Man shows up and we go on to the next reader!

Well…Luke’s account is pretty good for Mary, but it’s really thin for Joseph and I got the part of Joseph.  There are three (3) references to Joseph in Luke’s account and not so much as a single speaking part.  We learn that Mary was engaged to me and that I am “of David’s line.” [1]  Then I haul Mary and her fetus to Bethlehem.  Then Mary and her son to Jerusalem.  Then back to Nazareth, where Luke thinks we lived.  Then all three of us down to Jerusalem for Passover, some years later.  That’s it.  I’m mostly a carrier service.

So anyway, here’s what I wrote.  I hope Fran doesn’t gong me and go on to the next reader.  I did add some other material–the mileage and the altitudes, for example–but nothing from Matthew. So here’s my contribution.

“Hi. I’m Joseph. “Joseph” like Jacob’s son, Joseph. Here is my story as the writer Luke tells it. I didn’t get along with him all that well, to tell the truth. He was a lot more interested in Mary. Now the other guy, Matthew, I liked him a lot better. He really wanted to hear what the whole story was like for me.

So here are the few fragments Luke wrote down. I will try to adapt it to your culture, so you will understand what it felt like—just a little bit. I knew Mary’s family of course. Up in the hill country where we lived, everybody pretty much knows everybody and they and I contracted for the marriage between Mary and me. Then I went home and got back to work.

When she showed up for the living-together part of married life, she was pregnant. All I know is 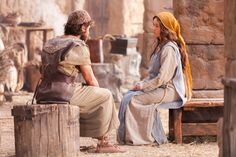 I wasn’t the father. She said she that had had a vision and that this was all God’s work somehow and that there was no shame in it. She also said that God said we had to name him Jesus. There haven’t been any Jesuses in my family as far back as I know.  Even in this picture, all you see is my back.  Luke must have taken the picture.

As you will discover, my part is mostly just to take my family to different places.

It was a long way and Mary was really really pregnant. I found a barn that was pretty comfortable and Mary delivered the child there. It would have been a pretty restful night after all that work, except that we had visitors all night who just wanted to see the baby. I said, “Hey, we are Jews. There are lots of babies around.” They said they wanted to see this particular one. OK. Maybe we can get some sleep tomorrow.

The next week we had to take go to Jerusalem so Mary could be purified [2] and so I could make an offering to God (redeeming the first-born child), rather than just leaving him in the temple, which, as it turned out, might have been easier. And old man and an old woman at the temple made a big fuss about him.

I had to get everybody back home to Nazareth. When Jesus was right on the edge of the teen years, we wanted to go to Jerusalem to celebrate Passover. So I loaded everybody up again and made the trek down south and then up the hills to Jerusalem—which is a thousand feet higher than Nazareth. It’s a climb, let me tell you. And then he got himself lost and Mary and I had to go back for him. That kid! He looked me in the eye and said that we should have known he would be in “my father’s house,” he said. Pretty mouthy, I think, but the scribes at the temple seemed to think he was something special. I should have just left him with them, but that’s not my part. I am a transportation service. So I took them all back home again.”

[1]  That was when it occurred to me that “David’s Line” sounded like a bus route and since all I do in the story is haul my family around, I decided that I must be a bus driver.  Not a pilot, like that Pontius guy.

[2]  Luke has both of us being purified.  He got some other things wrong too.  I really liked Matthew better.