From the time I first read The Screwtape Letters (TSL), I have been intrigued by the way Screwtape plays with salience. And that was before I spent four very concentrated years at the University of Oregon studying salience. In this essay, I would like to follow that notion a little and see where it leads me. 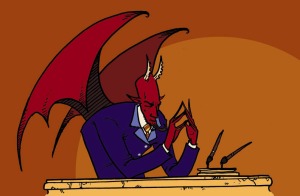 much younger and less experienced devil. Screwtape is the head [1] of a large department, in a sense, and Wormwood is just one of the many devils who work in that department under Screwtape’s mentorship. Wormwood has only one person, a “patient” in Screwtape’s vocabulary, to focus on and his job is to damn the man’s soul or, again in Screwtape’s language, to bring the patient “safe into the House of our Father Below,” i.e., in Hell. The point of all the letters of advice from Screwtape is to help Wormwood with this single task.

I called this perspective a gimmick, meaning no disrespect, because it provides a different perspective on spiritual issues and it attracts and holds our attention. Still, it is worth pointing out that Lewis, a well-known medievalist and philologist, does not really know how Screwtape looks at things. Lewis’s notion is not derived from biblical texts, which show only the mildest and most occasional interest in angelology, but from Milton, who cares quite a bit about angels. That means, to say the same thing another way, what we are told about Screwtape is true to Milton—Lewis, the scholar, passes it along faithfully—but not to scripture. 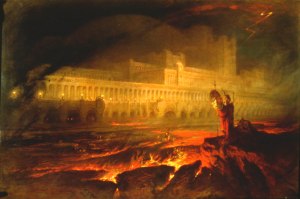 Now there is a sense in which Screwtape knows what God knows. The Devil, Screwtape’s boss, is a “spiritual being,” and Screwtape sees things as they really are. [2] But “knowing” is not the whole thing for the Bad Guys. They recognize the holiness of God and the grace of God and they hate it passionately. They deny it when they remember to, but often Screwtape says what is going on in terms that any Christian would recognize and then says how completely nauseous it is. So Screwtape’s information is first class, but his value system is abysmal. [3]  The abyss is in the foreground here.  In the background is “Pandemonium,” literally “the place of all demons.”

So the reader knows, although Screwtape uses language like “safe in the House of our Father Below,” that it is the eternal destruction of this person’s soul that is his object. And Screwtape’s object is the direct and sole responsibility of the apprentice devil, Wormwood. That means that when Screwtape says to Wormwood, “You need to be careful to do this…” .or “Try to keep him from realizing that,” we know that if we are interested in the salvation of the man’s soul, in terms that Christians would recognize, we need to be against what Wormwood is for. [4]

So if we could imagine ourselves as the Christian mentor to Wormwood’s “patient,” we would quickly see that all the advice is bad. It is bad so far as its moral direction goes—evil is praised and good is denied—and it is bad so far as salience goes.

“Salience” is not a word that is used as much as I would like. It derives from the Latin verb, salire, meaning “to jump.” We would say that the “salient” part of a statute or an argument or a property deed “jumps out” at us; that it calls itself to our attention. [5] Screwtape says things like, “Under these circumstances, be sure the patient is paying attention to A, but under other circumstances, our cause will be better served by focusing his attention on B.”
The first example comes in the first letter.

I once had a patient, a sound atheist, who used to read in the British Museum. One day, as he sat reading, I saw a train of thought in his mind beginning to go the wrong way. The Enemy, of course, was at his elbow in a moment. Before I knew where I was I saw my twenty years’ work beginning to totter.

The patient’s mind is “beginning to go the wrong way.” His thoughts are on a trail that leads to a serious consideration of God and what claim God might have on his life, in particular. For the patient to pay attention to those ideas, for him to claim them as salient, would be a disaster for Screwtape—20 years of his work with the patient, he says, is at risk. What to do?

Once he was in the street the battle was won. I showed him a newsboy shouting the midday paper, and a No. 3 bus going past, and before he reached the bottom of the steps I had got into him an unalterable conviction that, whatever odd ideas might come into a man’s head when he was shut up alone with his books, a healthy dose of ‘real life’ (by which he meant the bus and the newsboy) was enough to show him that all ‘that sort of thing’ just couldn’t be true.

What to do? Change what is salient. The patient could sit there and focus on these new thoughts, but Screwtape suggests that it is time for lunch. On his way out to lunch, he sees the No. 3 bus and hears a newsboy and the salience of what he categorizes as “real things” takes over. The ideas God was proposing become “that sort of thing” and the bus and the newsboy become “a healthy dose of real life.”

So not only does what is salient, what draws and holds the patient’s attention, change from A to B, but also from the standpoint of B, A is redefined. When his mind began to move in the direction of God, it was kind of interesting. Scary, maybe, but intriguing. Once the patient chooses B as his focus, he looks back at A and redefines it as uninteresting and probably false.

Lewis gives us a special treat by having Screwtape recall this event with satisfaction. By this time we know that the man’s soul is damned, he is, as Screwtape says, “safe in our Father’s house,” i.e. in Hell. And knowing that, Screwtape gives us the very language that the patient used later in his life, recalling his “narrow escape” at the British Museum: he was fond of talking about “that inarticulate sense for actuality which is our ultimate safeguard against the aberration of mere logic.” [6]

Let’s try one more example. Here is Screwtape’s formulation. Remember that in these exchanges of letters, Screwtape is the tutor. He is the master of the craft which Wormwood, the junior devil,  is supposed to be learning.

One can therefore formulate the general rule; in all activities of mind which favour our cause, encourage the patient to be unself-conscious and to concentrate on the object, but in all activities favourable to the Enemy bend his mind back on itself.

That’s the rule. The rest of that paragraph is an example.

These are salience games, as you can clearly see. Direct the patient’s attention outward in 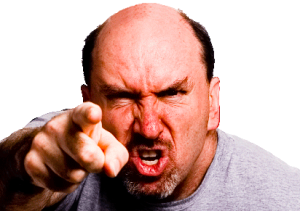 all cases where the external focus will help us damn him. The salient matter is the bad behavior of the guy at the bar—sorry, the “pub”—or his bad character. Focus on those. Inundate yourself in how despicable he is. Do NOT allow the patient to see that he is getting angry or being unreasonably judgmental or losing his self-control. If those, the state of his mind at the moment, become the salient matters, he will reject them. He will not choose anger. But if he is thinking about the moron at the pub, the question of anger will never come up; it will never become the salient question.

The other side of this, indicated by Screwtape’s use of “contrariwise,” is in all cases where the patient’s inward attention will help us damn him, then focus his attention on those. If he is taking a turn toward thoughtful and sympathetic treatment of a difficult friend or relative, we don’t want him thinking about the friend or relative, not about the effects of his behavior on them, not about what additional services they might require. If those are highly salient to the patient, then our cause—Screwtape’s cause—is not looking good. What Screwtape wants is for the patient to be focusing on how kind and sympathetic he is; how noble, how generous.

The more he thinks about what a nice person he is, the thinner and more vulnerable his choice of good actions will be. The salience is directed inward in such a case, not outward.

[1] The author, C. S. Lewis, has a lot of fun with spatial terms in this book. Because “Our Father in Heaven” is a standard Jewish and Christian way of referring to God, Screwtape refers to his own boss as “our Father Below.” Lewis gives Screwtape the nonsense word “Lowerarchy,” as if it could be set off as the opposite of hierarchy. It can’t: hierarchy derives from hieros a Greek word meaning “sacred” or “holy.” Screwtape’s word would have to be Higherarchy, but Lewis is a linguist and he is having fun. Is it really appropriate, in terms of this inversion, to say that Screwtape is the “head” of a department? Would he be the tail or the foot or the butt or something? Similarly, can we say with confidence that a junior devil works “under” his boss? If the boss is very low in the Lowerarchy, do not his “subordinates” work “above him?” There is really no way to be consistent about it, but as I say, Lewis is just having fun.
[2] He is forced, sometimes, for reasons of office politics, to deny that he knows what he knows, but he slips up—Lewis makes sure Screwtape slips up—frequently enough that we know what he really sees. Screwtape and Wormwood are on the wrong side of that quip in the New Testament Letter of James in which James sarcastically congratulates his addressees on “mere orthodoxy.” “What you believe,” says James, “is orthodox. Good for you. The devils believe the same thing and it scares them silly. You don’t even have the wit to be frightened.” Screwtape, for instance, describes the actual presence of God in terms that sound very much like the description of “the glory of God” in Exodus except that the “clouds of glory” are horrible asphyxiating vapors to Screwtape.
[3] Lewis uses that word too. It once meant “of or pertaining to the Abyss,” i.e. to Hell. It has come to be a term of general derogation—your grades this term have been abysmal—but Lewis knows what it once meant and puns on it mercilessly.
[4] That didn’t always work out in practice. The Screwtape Letters were printed, one at a time in the newspaper, and one reader wrote the paper to say that the “advice” that Screwtape was giving was very bad advice; that it was ultimately “diabolical.” That’s the word he chose. It must have made Lewis’ day to see the perspective he formulated for the Devil to be called “diabolical” by a reader.
[5] The means by which this “jumping out” occurs has been studied by cognitive psychologists for many years and is now being studied by neurologists. All I really need from the word is “something you are likely to pay attention to” and that is what Screwtape has in mind, without using the word, as well.
[6] I really like that kind of language. It sounds so smart, so appealing. And Lewis wants us to be drawn by it while at the same time we know that it is by words like this that the patient chooses Hell.