amid the hurricane force moods of his wife. The wife is so obnoxious that I felt an immediate admiration for Mr. Bennet just for being unmoved. In one of the early scenes, for instance, Mrs. Bennet is lamenting at the very top of her emotional range.

Mr. Bennet, how can you abuse your own children [in his previous remark, he characterized his daughters by saying “they are all silly and ignorant like other girls”] in such a way. You have no compassion on my poor nerves.

To which he responds:

You mistake me, my dear. I have a high respect for your nerves. They are my old friends. I have heard you mention them with consideration these last twenty years at least.

And because Mr. Bennet is so cool under these effusions from his wife, I have always tended to like him. I’m going to try to get over that in this post. Jane Austen gives us every reason to judge him harshly. She does not give us much motive, pairing him with his silly wife, but she does give us grounds. I never really noticed that until recently.

The story of Elizabeth Bennet starts to go the wrong direction when Mr. Bennet chooses his wife.

Her father, captivated by youth and beauty, and that appearance of good humour, which youth and beauty. generally give, had married a woman whose weak understanding and illiberal mind…

Mr. Bennet was “captivated” by the youth and beauty of the young woman he chose. He 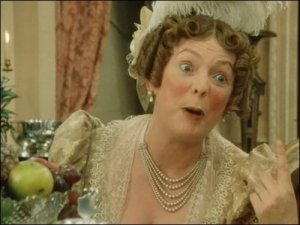 inferred, incorrectly, it turns out, that she was a woman “of good humor.” She was not. Further, she had “a weak understanding” and “an illiberal mind.” [2]. So, a bad choice.

But it gets worse. The weak understanding and the illiberal mind:

…had very early in their marriage put an end to all real affection for her. Respect, esteem, and confidence, had vanished for ever; and all his views of domestic happiness were overthrown.

This doesn’t seem quite fair. These traits of Mrs. Bennet “put an end to” Mr. Bennet’s affection. Does Mr. Bennet have no voice in the matter? No agency? Are his wife’s traits something that is done to him, to which he can respond only by retreating into irony? In any case, Mr. Bennet no longer has affection for her, nor respect for her, nor esteem for her, nor confidence in her. And that is the relationship between them that we see in the first scene of the book.

On the other hand, we don’t really care all that much in the first scene of the book. But later on (page 180 in my copy [3]), it matters a great deal. By this time we know that Mr. Darcy (who is Proud) has fallen in love with Elizabeth (who is Prejudiced) and she, almost, with him. Then word comes that Lydia, the irresponsible youngest daughter, has eloped with a dastard. Elizabeth understands immediately that Lydia’s disgraceful behavior is the end for her own relationship with Darcy.

[Darcy] seemed scarcely to hear her, and was walking up and down the room in earnest meditation, his brow contracted, his air gloomy. Elizabeth soon observed, and instantly understood it. Her own power was sinking; every thing must sink under such a proof of family weakness, such an assurance of the deepest disgrace.

By the time this happens to Elizabeth, we care very much about her disreputable family, and that leads us back to Mr. Bennet, whom we can, in this context, consider less kindly. He has taught his five daughters very bad lessons about family life.

Had Elizabeth’s opinion been all drawn from her own family, she could not have formed a very pleasing picture of conjugal felicity or domestic comfort. (p. 154)

By means that Austen doesn’t disclose, Elizabeth has escaped the picture of dysfunction

Our importance [the Bennet family], our respectability in the world, must be affected by the wild volatility, the assurance and disdain of all restraint which mark Lydia’s character. Excuse me—for I must speak plainly. If you, my dear father, will not take the trouble of checking her exuberant spirits, and of teaching her that her present pursuits are not to be the business of her life, she will soon be beyond the reach of amendment.

These are the harshest words Elizabeth has for her father. He will not “take the trouble.” Elizabeth thinks he should have and she knows that for her prospects with Mr. Darcy it is too late, but she still thinks Mr. Bennet should step in and do something about Lydia. We know that is not going to happen because Mr. Bennet has made his life tolerable by retreating into an unheeding distance.

To his wife he was very little otherwise indebted, than as her ignorance and folly had contributed to his amusement. This is not the sort of happiness which a man would in general wish to owe to his wife; but where other powers of entertainment are wanting, the true philosopher will derive benefit from such as are given.

Austen calls this emotional distance “philosophy.” “The true philosopher,” Austen says. I think she means only “resignation” or perhaps “wry amusement.” She certainly has no higher hopes for him.

In order to “take the trouble,” Mr. Bennet would have to take his family seriously, which means that he would have to take his wife seriously, which he is not willing to do. So the family of otherwise marriagable girls suffers, which means that Elizabeth suffers and that last disaster really hurts readers who admire Elizabeth. Like me, for instance.

And further,  if Mr. Bennet were to have thought about the marriage chances of his daughters, he would have been well-advised to endow them with enough money to attract—or at least, not to repel—suitors. He didn’t do that either.

Mr. Bennet had very often wished, before this period of his life, that instead of spending his whole income, he had laid by an annual sum, for the better provision of his children, and of his wife, if she survived him. He now wished it more than ever.

He ended by settling five thousand pounds on Mrs. Bennet and the children. Having refused, year after year, to set aside enough money to help support the girls’ marriage hopes, he ends by being disappointed in himself, and even, for a brief time, ashamed.

So…I have come a long way from my early enjoyment of Mr. Bennet. His reliance on ironic detachment works if I place it against the background of his undisciplined and garrulous wife. If I place his behavior against the background of his responsibility to provide for the girls a family life that would support and instruct them and a financial backing that help them find husbands, if find him not all that enjoyable.

[1] According to my heavily annotated edition, no first name is ever given for Mr. Bennet. And, if memory serves, he ends his letters with the closing, Yours &ct. where others, Darcy, for instance, end with their names. Hm.
[2] I am no Austen scholar, but I do think it is important that we give these crucial charges the meaning and the weight she intended to give them. My best guess is that “weak understanding” refers to the lack of subtlety she displays. People are good or bad; her daughters are better than anyone else’s daughters; grasping at recognition from one’s social superiors can only produce good results. I think the old meaning of “liberal” as “free from constraints” is what Austen has in mind when she describes Mrs. Bennet as “illiberal.” Her mind is bound to the small setting of her village and the everyday beliefs of her neighbors. She doesn’t read or think, so she is trapped.
[3] I am very partial to the Norton Critical Editions of the Austen novels. There are notes on corrections Jane Austen or her sister made from one edition of the book to another, explanations of the meaning of a given word at the time it was written, and a lot of critical reflection, about 150 pages of it, at the end.