Molly Worthen writes in The New York Times (see the column here) that Donald Trump’s candidacy has exacerbated a split among evangelicals. She describes it like this.

What is most striking is that Mr. Trump’s campaign has exposed a rift within evangelicalism — a split between those calling for culture war as usual and those who say Christians must adjust to life as a minority in American Babylon.

I confess that I was taken aback by the phrase “culture war as usual.” The American phrase

was borrowed from the German Kulturkampf, where a better understanding is “struggle.” No one would deny that we are having a “struggle” about the most appropriate cultural commitments in the U. S., but it may not really be a translation problem. It may just be that what is a “struggle” anywhere else in the world starts getting called a “war” as soon as it hits the U. S.  Lexical inflation?  It’s always worse when it happens to me?

The culture war should continue according to this evangelical faction. And what is the war about? Well, let’s just run down the list that James Davison Hunter provided in 1991 in his very useful book Culture Wars: The Struggle to Define America. He surveyed abortion, federal and state gun laws, global warming, immigration, separation of church and state, privacy, recreational drug use, homosexuality, and censorship. Looks familiar, doesn’t it?

That’s a lot we could choose to fight about, you will agree. but not everyone thinks differences should be fought about. My mind goes immediately to H. Richard Niebuhr’s influential book Christ and Culture. In that book, he laid out five modes of dealing with the conflict between what churches feel they are being called to do and what the more pervasive culture is doing.

Niebuhr proposes that Christians have disagreed among themselves about whether to “withdraw from, compromise with, or selectively affirm and reject, or transform society.” [1] I was raised in a “withdraw from” culture, the one Niebuhr calls “Christ against Culture.” Politics is a dirty business, the general culture is corrupt and if we are to be holy as God requires—the principal thrust of holy is “separate from”—then we need to withdraw. The Amish are a good example of that choice. 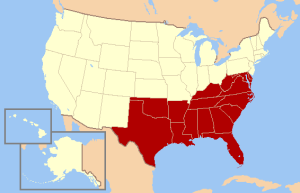 All that changed for the conservative wing of Protestantism around 1980. For one thing, Paul Michael Weyrich, a conservative political activist coined the term “moral majority.” It’s a really good phrase for a nation that prides itself on majority rule and that keeps electing thoroughgoing secularists to office. They are “only the political majority,” Weyrich’s term says, while we are “the moral majority.”

The moral majority took on electoral significance through the work of Kevin Phillips, who argued, in The New Republican Majority,  that the Republican party could get a lot more votes out of the white south if they stopped trying for racial justice. He called it “the Southern Strategy.” Here’s a quote of his from the New York Times from May 1970.

From now on, the Republicans are never going to get more than 10 to 20 percent of the Negro vote and they don’t need any more than that…but Republicans would be shortsighted if they weakened enforcement of the Voting Rights Act. The more Negroes [that was the publicly acceptable term for American blacks in 1970, by the way; it is not a racial slur] who register as Democrats in the South, the sooner the Negrophobe whites will quit the Democrats and become Republicans. That’s where the votes are. Without that prodding from the blacks, the whites will backslide into their old comfortable arrangement with the local Democrats.

You’ll have to admit that worked pretty well. Unless you are old, like me, or have read a lot of political history, you wouldn’t know that the expression “Solid South” once referred to the political monopoly of the Democratic party in the South. As a result of Phillips’ analysis and the Republican party’s pursuit of his logic, it is now solidly Republican.

So the culture wars that James Davison Hunter wrote about and the moral majority that Paul Michael Weyrich named, now have a solid sectional and electoral foundation. With that as a background, the expression “culture war as usual” actually makes sense.

But I began by observing that Molly Worthen says that there was a split among evangelicals and so far I haven’t called the other side anything. I think maybe “Moral Minority” would be appropriate. On second thought, I’ll write that without the capital letters: moral minority. What would that mean?

First, it would mean that these evangelicals do not imagine themselves as representing a majority view in the U. S. Jerry Fallwell and Pat Robertson, two of the best-known of the Moral Majority, argued that there existed a majority in the U. S. supporting of their views and their job was to mobilize it. Representatives of the moral minority don’t think that is true now and deny that it was ever true or that it ever will be true. They deny “a Christian America, either of the made-up past or the hoped-for future.” That language belongs to Russell Moore, the president of the Ethics and Religious Liberty Commission of the Southern Baptist Convention.  Moore was one of Worthen’s major sources for the column.

Just what that means politically isn’t really clear to me. If these evangelicals were political leftists, they could scan down the list of culture war items Hunter provides and take the progressive side (that would be the “sinful” side in Moral Majority terms). So, to pick just a few, they would be in favor of a woman’s right to choose abortion (not the same as being pro-abortion), they would want tighter federal and state gun laws, they would be environmental activists, strictly police the wall that is supposed to and sometimes does separate church and state and so on. That’s not what they do, according to Ms. Worthen.

These evangelicals are not more liberal than the Moral Majority; they are just responding to the issues in a different way. They might be convinced anti-abortion activists, for example, but what they would do is witness to their faith in declaring abortion to be wrong. They would not try to pass laws against it or control access to hospitals where it is offered. They might picket a clinic that offers abortions—that would be part of their “witness”—but if they did, they would be nice about it.

Again, Moore provides the language: “Change doesn’t come from a position of power, but a position of witness.” Rejecting “a position of power” is rejecting the Moral Majority approach. The moral minority position is a clear witness to their faith in God and in the social practices God demands from His followers. God does not, in this image, demand such behavior from non-followers.

So, for instance, we could imagine a moral minority member refusing to open his or her business on a Sunday. That is a witness to God’s having declared “a Sabbath” to be holy. They would not, as a part of their witness, demand that everyone else close their businesses on the Christian sabbath.

Dr. David Platt, a megachurch pastor, points out the role of William Wilberforce, the

evangelical politician who helped end slavery in the British Empire, as a helpful example, and Gabe Lyons, who runs a conference and media organization called Q, says, “We want to be a counterculture for the common good,” he said. “A counterculture can be antagonistic, lobbing grenades, but that’s not how Christians should be engaging.” In these two comments, Platt indicates how broadly cooperative he would like to see the work of evangelicals and Lyons describes a little of the style (not throwing grenades) that would support such a breadth.

But the moral minority is not pushing for doing nothing. They want to be sweetly reasonable but they want to be effective as well. The moral minority want to reject the immorality of the society that surrounds them. Dr. Platt points out that one of the Apostle Paul’s most vital churches, was set in “the fleshpots of First Century Corinth” and Paul’s council to the Christians in his charge was not to participate in such practices.  Paul did not go on to urge them to take over Corinth and set everybody straight.

Then there is the question, also, of distinct Christian practices affirmed by the moral minority approach. Dr. Platt urges evangelicals to “reject Christian nationalism, ‘cap’ their materialistic lifestyles and give more to charity.” These are ways they can witness to their faith. If they are going to be active in politics, Platt would like to see crusades against human trafficking where a coalition as broad as Wilberforce’s might be sustained, rather than against abortion, which is a deeply divisive and solidly partisan issue.

So as Molly Worthen sees it, the evangelicals in their response to Donald Trump are dividing into two groups. The first is the old style Moral Majority, taking pubic power and brandishing “the sword of the Lord.” The second is the newer, smaller moral minority that emphasized witness more than power and persistent persuasion over the sectarian bullhorn.

There is no question in my mind that the culture generally is moving in a direction opposed to both groups. Surveys reflecting attitudes toward homosexuality, for instance, show a decade by decade decrease in condemnation until it gets down to people who simply cannot grasp why you are asking the question at all. For many years now, surveys on abortion show majorities who say it is a bad idea and majorities who are opposed to depriving women of the right to choose abortions. Even in the South and even in the current Supreme Court, the logic of a secular government presiding over a richly religious—of many religions—people seems to continue to hold sway.

It is in their response to these cultural developments, as I see them, at least, that the two groups of evangelicals have divided.

[1] I took this list of options from a book whose authors are deeply critical of Niebuhr’s work: Authentic Transformation: A New Vision of Christ and Culture. You can tell from the title that these authors think Niebuhr chose “transformation—the church transforming the world” as his favorite. You can also tell that they don’t think much of his choice. These authors’ choice was “authentic transformation,” not the kind they say Niebuhr wants.