Why do we keep falling for this? Is it because we don’t understand anything at all about symbolism? Is it that we so dearly love making fun of the nation’s Chief Buffoon that we are willing to hand him the election as a gift?  Surely we can do better.  Let’s back up and try again.

President Trump said he would like to see churches packed on Easter Sunday. Fine.

Wouldn’t we all.?  Why wouldn’t we wish that we were not afflicted at all by COVID-19 and that we could go about our business? There are two elements here. One is context: there is a health crisis for which we are woefully unprepared. We need to get serious about taking the measures necessary to contain it. The other is religious symbolism. “Easter” is a prominent marker in the church year. Having “the churches filled” evokes a long-ago America when most people identified as Christians and where church attendance statistics were eye-poppingly large.

One is directly connected to the question of who will win the presidency in November. The other is distantly, if at all, connected. President Trump chose the direct connection. I understand that completely. The man’s a genius.  [1]  He knows where the blood is.

What I don’t understand is why his worst opponents want to cooperate with him. Liberals can say, if they want, that “filling the churches by April 12 (liberals wouldn’t refer to Easter directly if they didn’t have to) is medically irresponsible.” And that is what we have said and we are right.

But I asked that we back up a little and think of the symbolism first. So President Trump

wants to talk about religion and his hopes for it. We want to talk about illness, disease, and public responsibility. He wants to align himself with the hopes of one of his core constituencies. We want to bring the news of deprivation and disease. And not only do we want to do that, we also want to condemn him for his reference to Easter, as if we didn’t understand that every complaint establishes him more firmly in the pro-religion camp and ourselves in the anti-religion camp.

But wait! you say. That’s not fair! No it isn’t, but as Mr. Dooley said a very long time ago, “Politics ain’t beanbag.” We can align ourselves with the hopes of the faithful or we can ignore those hopes and celebrate the shuttered churches, mosques, and synagogues. Symbolically, those are our choices.

When President Trump chooses Easter as a symbol (rather than April 12, which you will agree is a very poor symbol) he is clothing himself in the mantle of religion. When we revile him for being unrealistic, we are clothing ourselves in the mantle of anti-religion.

Trump sets the categories—two-valued, as he most often does—and invites us to choose the wrong one. The category is religion: he is for it. In our criticisms of him, we keep the category—we are still talking about religion—and we, by being against him, are against religion.

Changing the category is going to be hard. Here is President Trump is a public setting where he can express himself freely and emotionally without any real oversight. To change the category in that setting, we would have to point out the real life effects of packing the churches with infected people. In that new setting, President Trump would be forced to backtrack and say something prudent. 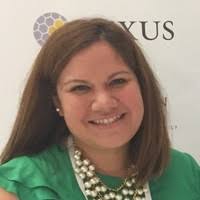 Please note that this is not a press conference where there could be follow-up questions. It is not a CDC briefing. It is more like a public appearance byAndrea Ramirez, (seen at the left) the acting executive director of the Center for Faith and Opportunity Initiatives at the U.S. Department of Education. She is a low level (compared to the President) employee and you could require her to say that she, herself, does not hope for the churches to be filled with infectious Christians on Easter. There can be hundreds of such interviews without touching the public appearances of President Trump at all.

So…I do have the beginnings of another solution. The one I have presented here—change the topic or change the charge—is really really hard. If I go back to this, I know I will have to come up with something better.