I know that’s an awful title, but I don’t get to say things like that all the time and this time I think I can justify it.  I will let you be the judge.

For one reason or another, I have been spending some time grappling with Romans 14 this year. Did you ever have the experience of listening to a song from a genre you are not familiar with? It’s an OK song, you say. Nothing special. Then you learn more about that particular kind of music and you start to evaluate it not just by “how it hits you,” but by how closely it achieves the demanding standards of that kind of music.

Wow, you say, it’s really good. That’s your brain talking. But further on down the road, you internalize those norms; they are now the norms that enable you to hear that music and appreciate it in the way that is most appropriate to the kind of music it is. It’s not “an OK song” anymore. It’s really wonderful. It moves you.

The weak and the strong

So the song metaphor is the way I am feeling about Paul’s treatment of the weak and the strong in Romans 14. I have read it all my life as having the essential meaning that the strong and the weak ought to be nice to each other. That’s not wrong—and it’s not a bad idea—but there is more there and lately I’ve been marinating my mind in just how much more there is.

There are four pieces to this tidy puzzle. What does “weak” mean? What does “strong” mean? What are their obligations to each other? How long do these obligations last?  The first three questions mean what you think they mean. That fourth one is a trap.

What does “weak” mean?

In the New Jerusalem Bible, my go-to version, the whole chapter is headed “Charity

What does “strong” mean?

Similarly, “strong” means not making these distinctions. The “strong,” says Paul, making it clear that he is one of them, have “faith enough” to eat any kind of food and they honor all days equally and they feel free to drink wine. Their faith is oriented toward the view that God has provided many good things for us all and that honoring God as we enjoy them is the right way to worship.

I am sure that all sounds safely ancient and foreign, but the fact is that when we feel strongly that there is “a right way to worship” or that it is crucial to “do what God requires,” we are implying that there is a single standard. God requires/allows that we do this and not that. And since these standards are adhered to by groups in the congregation, there is also an “us and them” dynamic. When you think about it, there is every reason for any member of the Roman church to think that “we” are doing it right and that “they” are doing wrong and, should the occasion arise, to express those feelings freely.

And this is where it gets good. The obligations are symmetrical in the sense that we owe them something and they owe us something. But what we owe them is different from what they owe us. And the difference is acute when you look at it psychologically. The weak are not to “condemn” the strong. The verb is krinetō and it does not mean “judge” in the sense of “come to a decision about,” as one would judge one wine to be better than another. And the strong are not to “disdain” the weak. The verb is exethenetō and I think a good modern approximation would be “to diss.” The strong are not to diss the weak. Both verbs, by the way, are imperatives and both have the sense of a continuing action. So we would be perfectly within our (hermeneutic) rights to say, “Don’t keep on condemning/ don’t keep on dissing.” or even “Don’t keep harping on…” So obligations are mutual, but they are not even remotely symmetrical.

It is hard to be scrupulous. I have friends who, for reasons that have nothing at all to do with religious faith, cannot eat gluten or dairy or any soy product. When I think of “scrupulous,” I picture these friends examining lists of ingredients and cross-examining the cook. As always, when you engage in costly behavior, you ask yourself, “Why am I doing this?” In their case, the answer is readily available. “Because I will get sick if I don’t.”

But what if the answer is, “Because it is what God requires.”? It is extremely difficult, within a small group, to say that God requires this strenuous scrutiny and this onerous abstinence from us but not from you. And when I see you doing the things that are forbidden to me, it is extremely difficult for me not to condemn you for doing them. And that is particularly true if I would like to do them, but am not allowed to. [3] “Condemnation” is the natural response of the scrupulous to the “unscrupulous.”

It is not at all hard to be “strong.” About questions like meat and wine, one needs only to ask, “Why on earth not?” They are natural appetites, certainly, and if there is no reason not to indulge them, why not? Of course, “God has forbidden them to you” would be a good reason, but God has not done so. “We,” that is our group (not yours) have a robust faith and do not imagine God to forbid things without reason. God has made the world full of good things for us to enjoy and only the crabbed and small-minded would refuse to honor God by enjoying them.

Oops. Did is just say a discouraging word? “Crabbed and small-minded” are not

condemnations, exactly. They are insults, but they are not serious insults. They are “lookings down upon;” they are trivializings. They are objections launched from the moral heights against those toiling in the lowlands. They are disdain. [4]  Archie Bunker, for instance, was supposed to be a laughingstock.  He was supposed to be the excuse for the disdain of “the strong.”  Except that America loved him.  More oops.

Here is where it gets dicey for the strong. First, says Paul to the strong Christians, do no harm. Don’t evaluate your behavior only on whether it is satisfying and without blame; examine it also in terms of what kind of damage it might do to the weak. You have no obligations at all to take on the rationale that the weak must use to justify their behavior, but you do have an obligation to them to refuse to do what will weaken their faith. [6]

There is, of course, no corresponding obligation for the weak. Paul has no notion that the condemnation of the weak will damage the faith of the strong any more than the condemnation of a movie by cultural conservatives will make it less attractive to cultural liberals. The weak get to keep on doing what they are doing and the strong do not. You don’t have to be too farsighted to see that a problem will develop here. 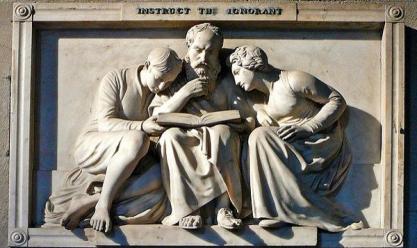 And I think it should. Paul’s time horizon is very short. He believes that we are living in the very last days of our era, that the return of Jesus is imminent and that, therefore, there is no need to adopt long-term strategies. I have been saying to my class that Paul is a sprint coach and the marathoners don’t know what to make of him.  This is the duty of the strong as they think Paul would see it in the long run.

In the long run, the commitments of “the weak” are problematic not because they are onerous, but because their justifications are thin. If it is true, as Paul says, that there are no other gods, then meat offered to them is not contaminated and anyone with a robust faith—here, that would require a robust justification—should be free to eat it. So if there is a long run, the strong need to get about the job of enriching the understanding of the weak.

The strong believe in principles; the weak believe in practices. If there is to be a long term, let the conversations continue. Let the love of the strong for the weak encompass not only their sharing the deprivations of the weak, but also helping them see that those practices are not really required by any principle they themselves would approve of. These conversations, remember, would continue over meals that have no meat and no wine. The strong are not to put stumbling blocks in the path of the weak. But they have no obligation to leave the weak hostage to groundless superstitions either, so I say let the conversations continue.

I’ve been an educator all my life and I firmly believe that bad justifications are much more toxic that meat and wine could ever be.

[1] These little “headlines” that are being put into modern Bibles and not inspired in the same sense the original text is and sometimes they are just misleading. This is one of those.
[2] And they are, frankly, very Jewish-sounding. The notion of “holiness” as separation, as withdrawal from, as purity, is how much of the Law is defined.
[3] My parents would be angry if they found out or the other members of my group would condemn me if they found out.
[4] At the risk of politicizing this unnecessarily, let me point out that these are the characteristic flaws of the blue culture (Democrats) and the red culture (Republicans)
[5] We get the word from scrupus, a Latin noun referring to a small sharp stone. Cicero imagined the nagging of the conscience as something like having such a stone in your sandal, but if you’ve ever passed a kidney stone, you have a much finer appreciation of what scrupus feels like.
[6] Paul is not interested, contrary to what I learned as a child in a very conservative home, in what will offend others, but in what will cause others to offend—what will be a threat to their faith. This is a much better standard, because when you learn that all you have to do to control my behavior is to say that you find it offensive, I am a goner and I know whereof I speak. Paul’s standard is much better.