“There’s such a thing as loyalty,” snapped the angry Jane Studdock.

There is, ma’am,” returned Andrew McPhee, “As you get older, you will learn that it is a virtue too important to be lavished on individual personalities.” [1]

I am trying to do a very hard thing. I am trying to be a fan of the team who is playing the best ball. I grew up, as you did, thinking that “fanhood” belonged to a particular team. I’m a fan of the Pittsburgh Steelers or the Cincinnati Reds or the Duke Blue Devils. I’m trying to get away from that. At my age, I probably won’t be successful, but I do admire the effort.

What would that mean?

basketball (not pro ball), and professional tennis. I’m not going to try to justify those. They are just the ones I most enjoy watching.

For each sport, there is a kind of game I like to watch. To some extent, it is the kind of game I understand best. Of course, I don’t like it if it doesn’t work. But if a team is playing a kind of game I don’t like, I don’t care whether it works or not.  Here, for instance, is the classic pick and roll.  Green (23) sets the pick.  If Curry gets free, he shoots.  If they adjust to him, Green will be free to “roll” and he can shoot.

I like smart players (tennis) and smart teams (football and basketball). It could be argued that doing whatever it takes to win is the smart thing and that might make good sense if you are a manager. I’m just a fan [2] So if the other team’s big men are undersized and yours are not, it would be “smart” to throw the ball into your really big man under the basket and let him just outmuscle everyone and score. That’s not what I mean by smart.  It’s effective, but it doesn’t require the kind of thought I like to watch in action.

On the other hand, if they have someone who just can’t guard your center and also someone who can, they will put the better defender on your center. If you pass the ball around really well so that they have to switch and put the poorer defender on your guy, [3] and then you pass him the ball and he scores—that looks like smart to me. It’s the same two points, but I would enjoy watching it. I am a fan of that way of playing basketball and I would like my loyalty to flow to anyone who is using it.

I learned from Tony Romo’s commentary during the 2019 Superbowl, that New England 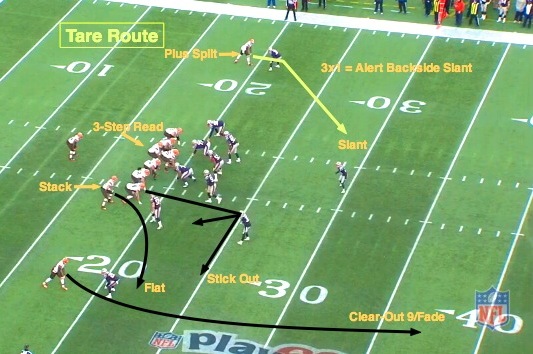 ran the same play three times in a row, delivering the ball to a different receiver each time. It is a considerable strain on the defense to defend “the same play” time after time, only to have it work differently time after time. So theoretically, I could have started with a leftover, “old style” preference for Los Angeles, and have been won over by the smart play of New England.

This is not that game, obviously, but just look at the “clear out route” at the bottom of the picture.  If the defensive lineman lined up opposite the wide receiver follows the wide receiver down the field, then he will not be in the flat where the tight end is going to be and the defensive back may or may not be able to get over to cover him.  Sometimes I can see that set up as I am watching.  More and more the commentators graph out some of the possibilities before the ball is snapped and refer to them in explaining the play.  You don’t have to be all that smart if all you have to do is look at what they are showing you.  On the other hand, you do have to pay attention, and you have to be willing to prefer a smart play to a dumb one.

As I am trying to build my new habits—being a fan of a style of play, rather than of a team—that would be a victory for me.

The downside of this new habit is that I need to be a more knowledgeable viewer. If I am the fan of a team, if the ball goes in the basket, it is good. If it was a bad shot—a shot the player should not have taken—it is bad whether it goes in or not. If a team is passing the ball around the perimeter because they can’t think of anything else to do with it, that it going to turn me off quickly. If, with every pass, they gain a small advantage until finally someone is free to take an easy shot, I am going to enjoy that. Similarly, if a team is passing well, but the defense is even better and no combination of passes gets an open shot—and even more if the shot clock buzzer goes off—I am going to become a fan of that defense,

If a safety misunderstands the coverage and lets a receiver get entirely open, that’s on him. If the offense pulls him to the center of the field, where he simply can’t get back to the flat to cover the receiver, that’s just a well designed play and no fault goes to the defensive back. The first instance is just bad football by the defense My loyalty starts to drift away. The second instance is just good football by everyone and my loyalty to both teams holds firm.

It works the same way in tennis.  If I can pull the opposing player a little wider with every cross court shot, eventually, I will get him to where he just can’t make it all the way back and if he commits to the long trek too early, I can just hit it behind him.  On the other hand, if the defensive player does more with my shot than just returning it, he can break up the whole sequence and capture the offense for himself.  I like both of those and whoever is doing it better is the one I would like to be appreciating more.

That could very well involve appreciating (being a fan of) Roger Federer in the first set, and when his tennis goes abruptly bad, which it does sometimes, being a fan of Andy Murray in the second set.  If I can do this, I will be a fan, in the fifth set, of whoever has been playing the best tennis up to then.

I have no idea if it will work, but I’d like to give it a try. Being a fan of the team that is playing the best ball or the player who is playing the smartest tennis seems like something I would like to do. I foresee getting kicked out of alumni parties, but I think I’m OK with that.

[1] Both from C. S. Lewis’s That Hideous Strength. Neither of them is talking about college basketball.
[2] I am aware, of course that “fan” is the short form of “fanatic” but I am trying to resist the idea that fanaticism must be attached to a team.
[3] Of course, I need to be able to see it and I admit that the commentary helps me learn what to look for. I also admit that the TV coverage is not a fan of that kind of watching. Still, it works often enough to engage my appreciation and, hypothetically, my loyalty.