The Church and Reconciliation

I have just read a report by Ian Lovett, written for the Wall Street Journal in May 2018.  The subtitle of the report runs like this: “A push toward activism among liberal Christian denominations is reshaping traditional worship and splitting congregations.”  My apologies for not providing a hyperlink to the article.  I don’t have that kind of access to The Wall Street Journal.

I want to begin this thought experiment with two questions.  Ordinarily, two questions multiply like two rabbits, but not always.  We will see. The two questions that first occurred to me are:

There is nothing religious—nothing notably Christian—about the activism Lovett describes.  And there is nothing necessarily apolitical about the traditionalism.  So why are they presented as alternatives and why, particularly, are the people who are attracted and repelled by the activism, presented in that dichotomous way?

Who are we getting?  Millennials, apparently.  Social activists.

For some congregations, that shift has prompted a surge in attendance–especially among young people–something mainline Protestant churches haven’t seen in decades

Regular Sunday attendance, meanwhile, has jumped to about 100–including an influx of young people who hadn’t attended church in years, or sometimes ever.

And what are we losing? Older people.  Long-time members of the church community.  People who are used to hearing about Jesus on Sundays.

Should the church be doing “this” or “that?”

The downside of that phrasing—“the church”— is that it implies that all the churches should be doing the same thing.  I want to reject that as a realistic option, but I don’t want to throw it away as a way of asking the question because it seems to be presumed by a number of the people quoted in this article. 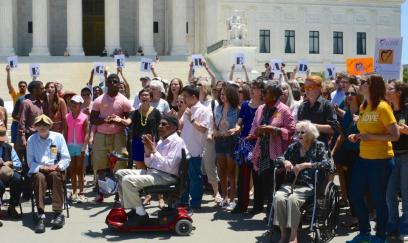 David Hoover, for instance, says, “We just have to keep standing up.”  Hoover is “encouraged by the church’s sharper political tone,” says Lovett.

On the other hand, Riki Ellison says, “There is no sanctuary at Christ Church,  just a battleground.”  That’s why he and his family are leaving.  This is the same church Hoover was talking about when he said the liked the “sharper political tone.”

When Lovett looks for a way of characterizing the change, he says the two sides are “parishioners who believe the church should be a force for political change” and “those who believe it should be a haven for spiritual renewal.”  Note that in this formulation, there are only the two goals and they are diametrically opposed to each other. [1]

The new activism of the clergy, says Lovett,  “[has] alienated conservatives, or 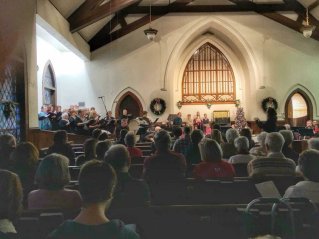 Or are they political conservatives, who might very well see their activism as “not politics,” but as part of a great crusade for restoring morality to America.  Picketing an abortion clinic, for instance, isn’t really “politics,” they might say; it’s just “doing the right thing.”

Lovett’s next paragraph introduces the Rev. Kaji Douša, who has goals of “stopping the wall” and also of “stopping the deportations.”  She says “the point of following Jesus is that you move and you do.”  It wouldn’t be hard to call that “activism,” but as soon as you call it “activism,” you remember right away that there are all kinds of activism.  The alternative, as the Rev. Douša sees it is “just getting people in church.”  It is almost as if nothing worthwhile can happen in church and that is why there is such a gap between “getting people in church” on the one hand and “moving and doing” on the other.

“If we’re not going to stop the wall and the deportations, then I don’t think we’re following Jesus,” said the Rev. Kaji Douša, pastor of Park Avenue Christian Church in Manhattan. “We’re just getting people in church, and that’s not interesting to me. The point of following Jesus is that you move and you do.” [2]

Another perspective on this divide comes from the Rev. John Bain and his daughter, Danielle Bain.  Danielle joined the Park Avenue Christin Church last year after ten years away from what Lovett calls “organized religion.” [3]

“Churches have upped their activism this year, because there’s been a call for it,” said Ms. Bain, who took part in a recent protest against deportations that the church helped organize in Washington Square Park. “Those churches are really drawing the millennial crowd.”

Who has been “calling for it?” I wonder.  Is it something that they want no matter what the cost?  If the radical politicization of the church causes it to break up into little pieces and sink to the bottom, would these people say that they had to destroy the church to save it, as if it were a Vietnamese village? 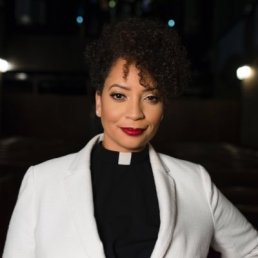 And then there is the question of who is leading and who is following.  If there is a public demand for a certain kind of activity and the church does what is necessary to meet that demand, isn’t that the same as if there were a demand for a new kind of housing unit and contractors fell all over themselves building that kind to meet the new demand?  That is the way commerce works and the way it is supposed to work, but what does it cost the church to work that way?  Pictured here is the Rev. Kaji Douša.

Then again, Ms. Bain is in New York City.  Her father, the Rev. John Bain, is in Stillwater, Oklahoma and in his church, “Democratic and Republican party leaders sat side-by-side in the pews.  Keeping the peace was never difficult, he said, until last year.”

Bain implies that he had been mentioning President Trump in his sermons, but we learn about that only by his saying that he had stopped doing it.  We don’t know what he said about the President.  What we know is that his church created a special ministry for immigrants, which outraged some members.  They saw it as taking a political stand. Several longtime members left the church.

It wouldn’t be hard to make a case that the church has a special responsibility to the sojourner apart from any politics entirely.  Deuteronomy 10:19 [4] could serve as a beginning text for such a church, provided that the responsibility was not set into a modern political context.  But if Rev. Bain had been talking about President Trump and also beginning a ministry to immigrants, he may very well have put it into a setting of partisan politics.  And if he did, it is not hard to see how the Republican and Democratic leaders started to have trouble sitting together.

Are those really the only options?

It probably did not escape your notice that David Hoover’s vision is about the church acting in the world outside.  That’s what “We just have to keep standing up” points to.  On the other hand, when Riki Ellison mourns the loss of the church as a sanctuary, he is not pointing outside at all.  He sees the church as a place of fellowship and maybe even of healing.  It makes no sense at all to ask which of those two the church should be doing.

I think we lose a great deal by organizing our options as political activism, on the one hand, and “just getting people in church” on the other.  I feel a real clarity about what we lose by building that picture.  Maybe a little anger, too.

I don’t have that same clarity about what we should be doing instead, but I do have an idea.  What if we made it a part of our ministry to de-tribalize our communities?  That’s not all that different from casting out demons.  [5] I see this in two settings.

First, this is something the church as a body, an institution, could do.  Imagine that along with the committees on Fellowship and Worship, etc., there was one on Reconciliation. [6]  The work of this committee would be to survey the issues that have turned their neighbors into partisan predators.  Back in the days Robert Putnam surveyed in Bowling Alone, people who didn’t agree with each other about very much competed against each other year after year in bowling leagues.  They could do that because the crime of “Bowling with the Enemy” had not yet been invented.  Now, of course, it has.  Along with Shopping with the Enemy and Going to Parties with the Enemy, and so on. [7]

Here is a small example.  The church might, with a little training, nail down a table at a Starbucks where partisan bloodletting is simply not allowed.  The consensus of the group is that we are here for other things.  We have established a very local culture of civility and reconciliation.  It’s how we do it here.  If you want to do proselytizing or flamethrowing, go do it online somewhere. 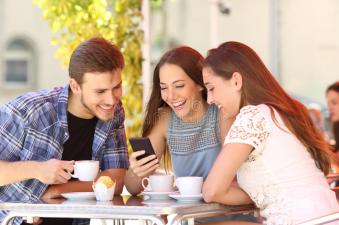 That’s the institutional face; it is something the Committee on Reconciliation might take on and systematically monitor.  But there could also be an individual face.  Individual members of that church could serve that same function wherever they go—provided they are willing to give up “winning” to serve as a group’s de facto conciliator. [8]

So if the split between remorseless partisan activity on the one hand and meaningless religious quietude on the other seems to you an unnecessarily broad split, let’s remember that this is something we are doing to ourselves.  There are vitally important things we can do that are not either of those and if the partisan Prodigals are ever to want to come home, it would be nice if there were a home for them to come back to.

Maybe we could do that.

[1]  When I see goals set out like that, in fundamental opposition to each other, I wonder whether there are not other goals that could be endorsed instead of or in addition to these two.  What about “community reconciliation,” for instance?

[2]  I suspect that the Rev. Douša is  a young person.  If that is true, the expression “not interesting to me” might mean only “not worth doing.”  Many young people have begun to use “interesting” as a marker for “worthwhile.”  But if this is not just the thoughtless language of a young person; if, by contrast, it is a serious argument, then it is a flagrantly bad argument.  The notion that God will call you only to things that “interest you” has been rejected by the church in all its ages and for good reason.

[3]  I always wonder what that term means.  Plausible antonyms could be “unorganized religion”—but then how would you know it was religious?—and “disorganized religion.”  Certainly we have seen a lot of that.  I suspect the term intends to point to the institutional structure within which the activities are carried on.  So “institutionalized religious practices” is probably what the terms intends.

[4] “And you are to love those who are foreigners, for you yourselves were foreigners in Egypt.”

[5]  I intended that remark mostly as a quip, but it started me down the road to thinking about it.  When you look at the effect the demons had on the…um…hosts in the New Testament, “casting out demons” might not be a bad metaphor at all.

[6]  You couldn’t call it the Committee on Exorcism, I suppose, but it is so tempting.

[7]  And watching others commit those crimes and not saying anything about it makes you “complicit,” so there is no “sanctuary” anywhere.  This goes to Riki Ellison’s point about the church as a sanctuary.  How about the church as “providing Sanctuary?”

[8]  It is the groups that must do the reconciling, of course.  The role of the “conciliator” might never be recognized and if it recognized, it still might not be understood.  “How did he do that?” would come to replace “Who was that masked man?”