I know, but he’s OUR dotard

I didn’t hear President Trump give this speech. I have a lot of trouble seeing him and hearing him. My dentist said just a small amount of nitrous oxide would help solve that problem, but he wasn’t allowed to give me any once I left the office. [1] I was eager to know what he said, however, so as soon as the White House released the transcript, I read it. The man never ceases to amaze me.

I want to begin by saying that Trump’s speech was “bunk.” I mean by that very rich word [2] that it was aimed at a domestic audience, not at the international audience in the U. N. auditorium where he was standing. So the people who were invited to be present for the speech—having never been in “Buncombe”–were in no position to appreciate how good the “bunk” sounded back there. 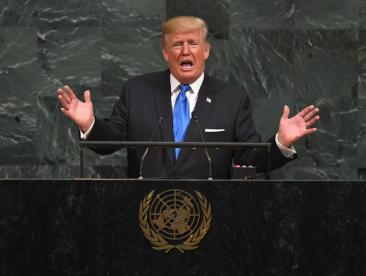 If you begin by understanding that President Trump was making a campaign speech aimed at people “back home” it all makes more sense. There is a great deal of anti-U. N. sentiment among Trump supporters. I used to see signs “U.S. out of U. N.” I haven’t seen any of those signs for awhile, but the sentiment lives on. This speech pandered to that sentiment in quite a few ways.

Let’s start with “The socialist dictatorship of [Venezuela’s] Nicolas Maduro has inflicted terrible pain and suffering on the good people of that country.” Why would he say such a thing.  Everyone is against “dictatorship.” Even dictators make sure to call their rule by some other name. But President Trump wants to attach “socialist” to “dictatorship.” “Socialist” is a good word almost everywhere in the world except the United States. It most places, it means caring for all the citizens of your country and sharing the burden of governance and where it is not presupposed, it is sought after. But Trump knows that his base thinks of it as a bad word, roughly akin to ‘communism,” so in constructing his condemnation of Venezuela’s Maduro, he combines them. That makes no sense at all at the U. N., but it makes perfect sense “back in Buncombe.”

Of the specific charges, the easiest to understand is that the U. S. is not getting its money’s worth out of the United Nations.

The United States is one out of 193 countries in the United Nations, and yet we pay 22 percent of the entire budget and more….  The United States bears an unfair cost burden…The American people hope that one day soon the United Nations can be a much more accountable and effective advocate for human dignity and freedom around the world.  In the meantime, we believe that no nation should have to bear a disproportionate share of the burden…”

In the context of the immediate hearers of the speech, none of this makes any sense at all. Does President Trump really think that the costs should be apportioned by dividing the total budget by the number of members? If he doesn’t mean that—and I am sure he doesn’t—then why does he say we are only 1/193 of the membership but pay more than 1/5 of the budget?

It would make much more sense to the immediate audience if he were to compare the percent of each nation’s Gross Domestic Product (GDP) goes to support the U. N., but that way of putting it is going to make no sense at all back in Buncombe. It’s too subtle and it isn’t angry enough.

In addition, I am sure it sounded odd for the leader of a constituent state to get up and say that his nation was better than anyone else. In fact. President Trump said:

The United States of America has been among the greatest forces for good in the history of the world, and the greatest defenders of sovereignty, security, and prosperity for all.

The United States continues to lead the world in humanitarian assistance, including famine prevention and relief in South Sudan, Somalia, and northern Nigeria and Yemen.

The United States will forever be a great friend to the world, and especially to its allies.  But we can no longer be taken advantage of, or enter into a one-sided deal where the United States gets nothing in return.

Remarks like these will be considered bizarre by the world leaders who assembled to hear the speech. On the other hand, they are red meat for the core of the Trump constituency and as odd as these statements seem in the setting where they were delivered, they make perfect sense to angry white Trump voters.

embarrassing.  They are dumb, but they aren’t really dangerous.  But there is another matter that troubles me and this one I think it is far more dangerous. Trump has in mind changing the understanding of what the U. N. is for.

Why are we all here? Is it really to advance the cause of each of our nations? Really? Is that the behavior we expect from China? From Iran? From North Korea?

Are there really no “world issues” that we can address if we are willing to set aside the national interest for the purpose of working on them? In whose “national interest” is humanitarian aid, for instance?

In the Trumpian vision of the U. N., is there any place for a Security Council, which has the authority to sit down together and act on behalf of common interests—and act in ways that require authority and sustained funding and sometimes even armed force? Does the loose coalition of self-interested nations support such an institution? I don’t think so.

And that the part that I said troubles me. We can get beyond a few self-indulgent speeches aimed at constituents “in Buncombe.” We cannot get beyond a fragmentation of the world’s great powers.

There is another way to look at this, of course. To help me think through this event, I went back and looked at President Obama’s first speech as President to the United Nations. I do not recommend casually that you go back and take a look at that speech. I did and it broke my heart. But I do want to put this short passage into this record; just to help us all remember that it doesn’t have to be the way it was this week. It used to be better and it will be again.

This was President Obama’s vision.

The United Nations was built by men and women like Roosevelt from every corner of the world — from Africa and Asia, from Europe to the Americas. These architects of international cooperation had an idealism that was anything but naïve — it was rooted in the hard-earned lessons of war; rooted in the wisdom that nations could advance their interests by acting together instead of splitting apart.

Now it falls to us — for this institution will be what we make of it. The United Nations does extraordinary good around the world — feeding the hungry, caring for the sick, mending places that have been broken.

[1] That’s not precisely true. I do think that the nitrous oxide (“laughing gas”) would have helped because, as the told me at the dentist’s office, nitrous oxide doesn’t make it hurt less, it just makes you care less how much it hurts.
[2] Felix Walker, who served in Congress from1817—1823, is supposed to have given a long speech of which his colleagues disapproved because it took a lot of time and wasn’t about anything. Rep. Walker asked their indulgence. His constituents expected him to make speeches in Congress and this one was for them, back home in Buncombe County, North Carolina. Rep. Walker said he understood that his remarks didn’t make any sense in the context of the Congress, but that he was “speaking to Buncombe.” We derived the English word “bunkum” from that setting; it is familiar to us now as “bunk.”

1 Response to I know, but he’s OUR dotard