This is the prime moment for environmentalists who have been screaming their heads off about the urgency of the need to change our practices and begin to deal seriously with the global warming catastrophe. This is the time when they—“we” actually—have a chance to make a difference by doing and saying the right thing.

What is the right thing to say?

It is, “I’m so sorry about the catastrophe that has overtaken you. I will do everything I can to see to it that immediate help and long term funding ease the pain you and your family are experiencing.”

That’s it. Nothing more. There are more things we might want to say, but that is all that should be said to the citizens of Florida and Texas. There are other things that might be said to their representatives and to members of the executive branch who are responsible for enforcing laws that bear on environmental pollution. But to the citizens, “I’m so sorry….” is it.

EPA Direct Scott Pruitt has said that raising the question of climate change is “insensitive.” He is right. Now is not the time. On the other hand, whatever it is we do allow ourselves to say should set up the crucial policy discussions that will be needed later. [1]

The point I want to make is more emotion-centered than argument centered, however, so I am going to “make my case” so to speak, in a different way. I’m going to use some scenes from a book and a couple of movies that I think make the emotional case I want to make.

There is a scene in James L. Brooks’ film Spanglish where the grandmother, who gave up alcohol so she could deal with her daughter’s marital crisis successfully, manages, for once, to keep her daughter from saying more than she should.

What the daughter does say is this, ““I’m just so glad you’re back.”

That doesn’t seem like much, does it? But her husband has just spent the night at his 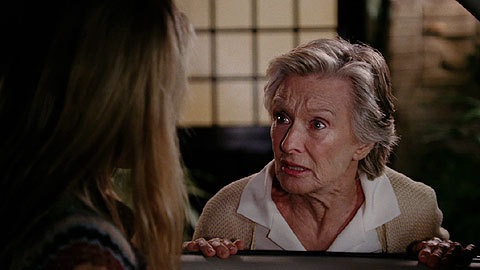 restaurant with one of the most beautiful women in the world and the wife interrupted her affair long enough to notice. She hopes desperately that the husband has had an affair. She thinks that would somehow make it easier for the marriage to survive her affair. Here are the grandmother and the wife in urgent conversation. I’m not even going to bother to identify the parts. It begins when the husband comes home. We, as viewers, have already seen what it cost him to continue to be faithful to his wife.

Oh, God, it’s him. He’s gotta tell me everything\

Do you know that right now, you are your own worst enemy?That you can’t trust one thought in your brain. Then trust me and only allow yourself to say one thing to him.
One thing. “I am so glad you’re back.”

Just those words, if you want to have a prayer of coming out of this.

Jesus, do I need a little makeup?

You need a hose.But you don’t have the time. It’s fine that you look like that.It’s genuine. You can use genuine.

The husband walks in and finds a disheveled and anxious wife in the entryway. He knows what kind of conversation she wants. He doesn’t know she is capable of postponing it.

I just wanted to say…

I can’t sleep upstairs with you.I just can’t for now.

That one line and no more. None of the other things she desperately wanted to say. There will be time for those later if she really needs to know. Spoiler alert: Nothing she will learn, later, will help her in the slightest. But at that time, saying that one thing and no more, preserves the possibility of more substantive conversations later.

And that’s why I want environmentalists to say to Floridians and Texans who are in great distress right now, “I’m so sorry about the catastrophe that has overtaken you. How can we help?” And no more.

What Pruitt actually wants is for there to be no discussion, ever, of climate change. That is why he has systematically eliminated any reference to climate change from the EPA website, according to the Washington Post. If he were more politically astute, I think he would bait environmentalists and try to get them to behave like the injured wife in the story. No caring. No compassion. No help. Just, “I told you so.” 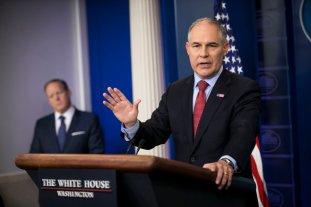 And if we did that, the moment would go by when the argument can be put aside just for now and simple humanitarian assistance given—without a ruler across the knuckles for once. And the resentment of elite know-it-alls in exacerbated and Trumpism gets stronger. You can see why Pruitt would like that. You can see why I wouldn’t.

Very likely, Pruitt and I know the same thing about the resistance of Trump voters to having their knuckles whacked. The strongest part of the Trump coalition is white males with less than a college education who supported Trump by a jaw-dropping 67% to 28%., the largest of all the demographic splits among white voters. And what we know about this crucial voter class is that they have fierce resentment toward those who “disrespect them,” to use the current vernacular.

The resentment of “elites” is so strong that they would—and do—willingly vote against their own economic interests just to stick it to the elites. You can find that in half a dozen contemporary books and maybe a hundred articles. It’s just true. Finding a way to appreciate it is the issue for environmentalists.

Here’s one. Here is Dellarobia Turnbow, heroine of Barbara Kingsolver’s Flight Behavior. She is trying to explain the divide on climate change to a scientist who has come there to find out why the Monarch butterflies decided to winter in Tennessee this year.

Ovid says, “You think…it’s a territory divide? We have sorted ourselves as the calm, educated science believers and the scrappy, hotheaded climate deniers?”

Dellarobia replies, “I’d say the teams get picked, and then the beliefs get handed around.”
“Team camo,” she says, referring to [her husband] Cub’s team. “We get the right to bear arms and John Deere and the canning jars and tough love and taking care of our own.”

“The other side,” [she doesn’t even know what to call the other team but contemporary conservatives call them Limousine Liberals], “wears I don’t know what, something expensive. They get recycling and population control and lattés and as many second chances as anybody wants.” Dellarobia doesn’t have a name for the “other team,” but she knows they are rich (wear something expensive, lattés, second chances) and progressive (recycling and population control).

The great thing about this exchange, as it bears on my current difference of opinion with Scott Pruitt, is that Dellarobia is talking and Ovid is listening. Further, I think Dellarobia is right. The teams get picked and “then the beliefs get handed around.” The relevant beliefs at the moment have to do with whether the nation will mobilize behind these disaster-ridden areas. The beliefs Tomás Relegado wants to talk about now should be talked about later and with different people.

The other picture I want to give you comes from Fraser C. Heston’s film Needful Things. [2] In this scene, Danforth Keaton III, who is “disrespected” throughout the movie by being called “Buster,” shows up in the center of a crowd and he is strapped with explosives.

“Hi,” he says, imitating the AA protocol, “My name is Dan and I’m here to blow up your fucking town. You’re all going to pay big. Pay h-u-u-u-ge!

That turns out to be no more than a straight-line for Keaton.

“I got a reason, you shithead. I got a lifetime of reasons.”

I want to offer you that picture so we can look at it in detail. Keaton is just about to blow himself up. [3] And his pitch, the whole of his interest, is that “they” and going to pay. Is he really capable of looking past all the cost to himself just so that he can do something that will cost others? Of course he is. A large part of the conservative demographic votes in exactly that way. 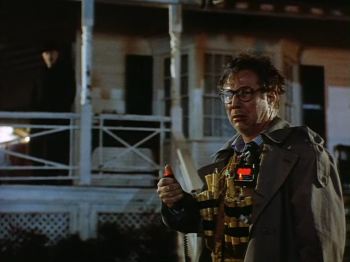 accumulated—“a lifetime of reasons”—that present events cannot be made the reason for deciding what to do. In that way too, I think Keaton illustrates the resentments of the right wing.

I’m with Sheriff Pangborn. Make the present moment the crucial moment. Don’t raise the larger questions at the time of crisis. Don’t try a self-interest argument with anyone who is so bent on causing others pain, that he is willing to undergo any amount of pain himself to do it.

So in place of argument, I want you to spend some time looking at these three pictures and thinking about what they mean. That is certainly what I have been doing. The second two, Flight Behavior and Needful Things, illustrate how thoroughly fixed the climate change denial is. It’s not a matter of data. It’s a matter of showing their contempt for the people who don’t have any respect for them.

The scene from Spanglish argues that what we need to say to the citizens—remember that I am hoping for another message to the congressmen—is only this: “We are so sorry. How can we help.” Period. Nothing more. My argument is that saying only that will help sustain, in the long run, the kinds of conversations Scott Pruitt wants to defer forever.

[1] And that is the concern of Tomás Regalado, the Republican mayor of Miami.“This is the time to talk about climate change. This is the time that the president and the E.P.A. and whoever makes decisions needs to talk about climate change,” Mr. Regalado told the Miami Herald. “If this isn’t climate change, I don’t know what is. This is a truly, truly poster child for what is to come.”
[2] Based on Stephen King ’s book of the same title.
[3] If I had already sold my soul to the Devil, as Keaton has, I’m not sure I would be all that eager to die, but there is no reasoning with him at this point and that is, in fact, the point I want to make.