A chair with four legs

This morning, I had an “If you build it, he will come” moment. It was in the shower, where I normally hold the team meetings.[1] I don’t want to say I “heard” these words; I’m not entirely sure how I got them. I did understand them immediately, however, and today I’d like to tell you what I understood. [2]

The words, “Jesus is presented to us sitting on a four-legged chair” showed up in my

mind during this shower. Things like this have happened before, so I wasn’t startled by it and I didn’t rush out of the shower to write it down because I knew I would remember it, like Poincaré’s Conjecture, which came to him as he was getting on a bus and which he didn’t bother to write down until the end of the trip. [3]

So I’ve established that the “mode of delivery” was a little on the odd side. Now I have to tell you that the content of the delivery is pretty ordinary. It matters to me mostly because of the views it excludes—which is not very generous of me—but I also don’t want to deny that it is true about me.

The positive meaning of this statement is that the Jesus to whom we have access in the gospels is presented to us simultaneously in accounts that differ from each other in much more than fact. They differ in intention, in narrative structure, in vocabulary, and in christology. [4] They cannot be reconciled and organized as a single account. [5]

This is bad news for people who want to think of the gospels as journalistic accounts of the life of Jesus. We would think it odd if a major public figure appeared at a well-known public place to give an address on foreign policy and the major national papers disagreed in their accounts of who the figure was, where he or she spoke, and what was said. That would puzzle us because we know what the presuppositions of journalism are and we know that these differences are contradictions. Properly speaking, if one is true, the others cannot be true.

And that is why it is important to understand that the accounts we have—Matthew, Mark, Luke, and John— of the life and ministry of Jesus are not journalistic accounts. They are more like sermons with extensive footnotes. The point of coherence, the notion that each of the gospels is organized around, is that the life of Jesus was a wonderful event, well worth hearing about. In each gospel, the stories Jesus told and the miracles he worked and the arguments he got into are grouped around the writer’s notion of who this Jesus was and why it is important to know about him. Those differ considerably among the authors.  That is why the instances they offer in support of the meaning each one holds to be central, don’t fit together. How could they fit together? They support different narratives.

Raymond E. Brown, the Catholic scholar whose lectures and books are very likely the ultimate source for whatever it is that happened in my shower this morning, has a different image of this unity and multiplicity. He imagines that the life of Jesus is like a jewel, whose multifaceted beauty cannot really be fully appreciated until it is seen from all sides. One facet is featured as you look at it from this side; another facet when you look at it from another side. (An-other side, not as we often say today, “the” other side.)

On the other hand, I keep running into people who look at the whole matter very differently and I think that is why the notion of the four-legged chair appealed to me. It makes a very ordinary kind of sense that if a chair is built to have four supports and its stability is designed with that in mind, taking away one of the legs will present a problem. The unwary person is quite likely to fall from such a chair. Even a wary person will have to have pretty good balance and muscle tone and will have to continue to be alert. I’d think that would get tiresome. 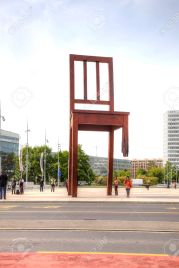 the significance of Jesus—is a little more aggressive than Brown’s notion of the multifaceted jewel. When, in Brown’s metaphor, you don’t appreciate all the facets, you miss part of the beauty. When, in Hess’s metaphor, you don’t use all the chair’s legs, you get dumped unceremoniously on the floor. So, this notion that came to me this morning is a notion with, as they say today, “an attitude.” It is a response to something.

So it has, as I said in the beginning, a positive meaning. But then this other side, the part about getting dumped unceremoniously on the floor, is a more negative side. The negative side of this image reflects both the times I have seen the gospel accounts abused and also the times when I have been accused of abusing them.

I don’t want to claim that I am innocent in the matter of this event in this morning’s shower. If I hadn’t wanted it, it would not have come and if I had not delighted in it, I wouldn’t have remembered it. But I did. And I did. And this is the story.

[1] I run over the plan for the day while I’m showering and the various parts of my body who hear they are going to be called on to do something, instruct me on the modifications to the plan they will require. Some days, there is very little similarity between the play I first called and the play we actually run.
[2] I know this sounds uncanny, but that’s mostly because the content of this one was religious. Of the few of these “events” I have experienced, most have not been religious. In fact, the most recent such event was the announcement that a pun I had been working on for most of a year, off in the shadows of my mind, was finished and I could pick it up whenever I had a free moment.
[3] The crucial idea came to him as he was about to get onto a bus, as he relates in Science and Method (1908):”At the moment when I put my foot on the step the idea came to me, without anything in my former thoughts seeming to have paved the way for it, that the transformation that I had used to define the Fuchsian functions were identical with those of non-euclidean geometry.’
[4] And in many other ways. That last difference might seem arcane, but it only means that who Jesus is and how we know about him, are presented differently in the four gospels. That would be an unremarkable thing to say if it were not also true that sometimes scholars seize upon one perspective and seek, by privileging that one, to falsify the others.
[5] Long before I learned that this was a project many centuries old and a project the church had rejected, I tried it myself. I couldn’t do it and my failure was at so many places that I simply concluded that it couldn’t be done. Later, when I read that it was the church’s view that it also shouldn’t be done, I felt better about it.