Why am I doing this?

A motivation is what moves you to act. It was simpler once. I remember when we used to be “moved to action.”[1] Then we reasoned that there must be some internal gadget that did the moving so we invented “motive” and then when a “motive” was present, we “had” motivation.

One of the questions that has interested psychology for a long time, and that now interests political psychology, is what that little gadget is. We understand that there can be reasons for acting that do not precisely begin from within oneself. [2] We speak, ordinarily of “intrinsic” motivations if we provide the reward for the action ourselves and “extrinsic” if someone else provides them. 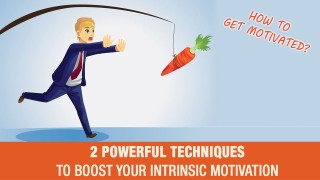 You would think that a rewarded action would be more likely to be repeated than an unrewarded action, and that is certainly true, but how on earth would we know whether an action was rewarded? In the neighborhood where I lived for a long time, there was an old man who walk around with rubber gloves and a plastic bag and picked up trash. It wasn’t his job. He wasn’t paid for it. So far as I know, he wasn’t thanked for it very often. Was his action rewarded?

When we say an action was “rewarding,” we ordinarily refer to intrinsic motivation and when we say “rewarded,” to extrinsic motivation. Odd, isn’t it? So what happens when people who have found a practice—teaching middle school, for instance—to be rewarding, are suddenly” rewarded” for it? According to every study I have ever seen of it, performance declines.

Since all the studies seem to find the same thing, I’m going to skip over what happens and 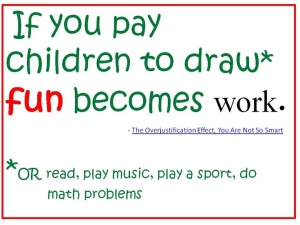 move right to why it happens. My favorite explanation is that the answer to the question, “Why am I doing this?” which is a crucially important question, gets muddled. Before I was “rewarded” for it, I “found it rewarding.” The answer to the crucial question was, “Because I like it” or “Because I value it” of even, “Because it has to be done and I am here.”

I ask the question and derive the answer from the nature of the work or the presence in my mind of the meaning and value I find in the work. You might think that just adding extrinsic motivation to internal motivation would make it twice as strong, but it doesn’t. It is more like dumping one radio signal on top of another, so that you can’t be sure just what you are hearing.

I am going to use “discernment” in the modern sense of being able to tell what to do or what is worth doing. [3] Interestingly, “discernment” is a fact that can be deduced from outcomes. It would be nice if it were like the cartoon light bulb that turns on when you get a good idea (and sometimes it is) the that is not a reliable indicator.

Generations of experiments in social science laboratories have demonstrated that students 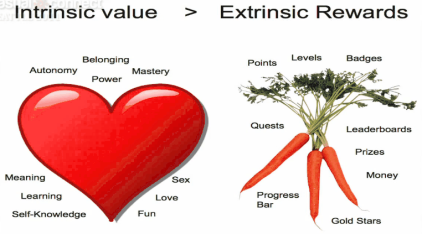 can learn “how to win at this game” with no idea at all of what they are doing that works. You can watch a student get better and better at playing this game; the scores go up and up. But when you bring a new player in and ask the experiences player to explain “his technique,” it turns out that he has no idea.

Well…he does have an idea. That is why he can continue to achieve the high scores that eluded him when he was new to the game. But he doesn’t have access to that idea. It raises the question of what we mean by “he” or “she” if the player “has” the understanding in one sense and not in the other. She can do it consistently, but she doesn’t know what she is doing.

Let’s go again to the question of where this learning comes from. Imagine that the experimenter is guiding the student’s choices so that she makes better choices than she would otherwise. The early scores would no doubt be higher, but that isn’t why they play the game. The process by which the student is rewarded for the choices she makes—they are shown to be correct and therefore, in terms of the game, valuable—needs to be immediate and internal. The student will not learn, otherwise, “what works;” only how to get high scores.

If discernment—separating the good from the bad—is going to become a stable strength, the determination of what is good has to have some relationship with the choice she has made. Following the (very good) advice of the experimenter will not do this, of course. The glow of getting it right and the sting of getting it wrong will be mediated by the experimenter and therefore denied to the student.

So what does this mean for the staple virtues of our time, like “good advice.” Good advice is mother’s milk. It’s exactly the right thing at the beginning. And just as a baby needs to be [4] weaned from breast milk, so he will need, later to be “weaned” from baby food, and, still later, from junk food.

Every one of these transitions will benefit from the intervention of someone who knows when (there is the harvest metaphor underlying discernment) to wean the young person away, and to what. You can “import” motivation and good judgment from an external source at the beginning and that is, without question, the best way to do it.

But then you need to get rid of the external source because when the immediate feedback that intrinsic motivation and personal discernment require and only impeded by external sources. Really? What about really really good advice? Really really good advice is terrific at the beginning. It can provide the reason (motive) for doing something that would not be there otherwise; it can provide the judgment, (discernment) that would not be there otherwise. But then it needs to stop so that the immediate (that means “not mediated”) process can proceed.

Both of those answers require that the effects of the actions be clearly perceived and judged by the agent, the person acting, not the counselor or the parent or the coach. Doing it because the coach wants you to id not going to work over the long run. It is mother’s milk. And doing what the coach tells you to do is not going to work over the long run. Only the agent can tell in the immediate situation what works and what does not. That too is mother’s milk.

So pay attention to how it feels and to what works. Then do that. When you are doing it wrong, you will know.

[1] Very straightforward. The Latin motus (look familiar?) is the past participle of the verb movere, “to move.”
[2] Although it isn’t as clear as one might think. When someone says, “Do this or I will whip you,” you could say that the whipping is an external motivation or you could say that the desire to avoid a whipping is an internal motivation. As complicated as it might be, it doesn’t seem to confuse us.
[3]The Latin is dis = apart and cernere, “to separate,” so fundamentally, to be able to tell

one thing from another. It’s a harvest metaphor, so if your mind runs to separating wheat from tares, you are thinking along some very old lines. Also you were raised reading the King James Bible.
[4] The curious thing about the word wean is the missing prefix. The Middle English awenian, “to wean away” gives the whole picture. The root wenian means to desire, to attain, to be satisfied.” The the privative prefix a- means “away.” And when we are not actually talking about weaning a child, we often say “to wean away,” including both parts of the idea. It means to be satisfied “with something else.”
[5] I’m just playing. We get the English “adult” because it is the past participle of adolescere, “to grow.” And it might seem that in turning to growth, we are moving away from the weaning metaphor. But not really. It turns out that adolescere, “to grow,” is derived from alescere,” to grow up” and that alescere is a development of alere, “to nourish.”So adult, the past participle, marks the end of the nourishment process and is still very much a part of the weaning metaphor.