A woman’s right to choose her own feminism

In Season 3, Episode 14 of The West Wing (Night Five), a temp named Celia Walton is working in the White House. Celia is what I think I am going to call a Hillary Clinton “kind” of feminist [1] She objects both to the way Ainsley Hayes looks—she was called back to the White House from a concert—and to the way Sam Seaborn comments on Ainsley’s outfit. Here’s the way the crucial part of the exchange goes.

Ainsley Hayes: I don’t think whatever sexuality I may have diminishes my power. I think it enhances it.
Celia Walton: And what kind of feminism do you call that?
Ainsley Hayes: My kind.

Celia takes for granted that “feminism” comes in several kinds and that she will recognize them when she sees them played out. Nothing she has seen from Ainsley that night identifies what kind of feminist she is. That’s why Celia is puzzled and I am sure Ainsley’s answer doesn’t help her because it not only doesn’t answer the question as asked, but undercuts the basis of the question entirely.  Ainsley looks a lot better than this in this episode; this is the closest I could come. You get the idea.

This longer excerpt gives you the setting of the two line exchange I used as an introduction.

“My kind” is an answer that rejects the notion that there are a few recognizable kinds. And that brings us to the question of how important “kinds” of feminism are. For that, let me take you to Emily Bazelon’s conversations with women in Pennsylvania after Hillary had lost the 2016 presidential election and had, in fact, lost the whole category of “white women.”

This excerpt is a part of Bazelon’s conversation with Palma Frable of Moscow, Pennsylvania and her daughters, Abigail and Lauren. I added to this last January with a post entitled “Hillary and the “Women’s Vote” in Pennsylvania,” which you can also see here if you would like more context.  Here is part of Bazelon’s summary:

Frable also admires Ivanka Trump and felt she was one of the campaign’s “top three assets.” She sees Ivanka as a role model for Abigail in her own entrepreneurial interests. It’s not Hillary’s “Gloria Steinem feminism,” as Frable put it, that she values. It’s Ivanka’s sleek version of female success, which commentators have labeled “commodity feminism” — branding to sell products.

Right away we see the “kinds of feminism” emerge. Moving past the efforts of the suffragettes, who made “women” a constituency worth a politician’s time, the first modern feminism is associated with Gloria Steinem. Pamela Frable associates Hillary’s public stance, both what she says and how she represents herself, with Steinem’s “kind” of feminism and she doesn’t like it. 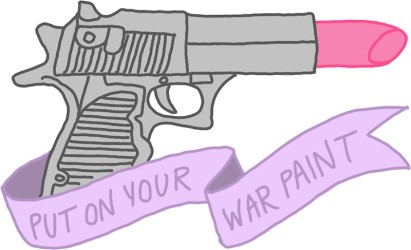 But there is another kind of feminism, which Bazelon says commentators have labeled “commodity feminism.” [2] I have more commonly heard it called “lipstick feminism.” It is another “kind” and it is the kind Pamela Frable likes. She seems to have put Hillary Clinton up against Ivanka Trump as alternative visions of where this nation might go and to have chosen Ivanka.

Once again, Ainsley’s designation “my kind of feminism” loses out.

But there is another reason I called Celia a “Hillary Clinton kind of feminist” and it shows up in another part of Bazelon’s conversation with the Frables.

All of this [Trump’s wish list] matters far more to her than anything Trump said about women or was accused of doing to them. Anyway, given Bill Clinton’s history, how can Hillary complain?

“I have disrespect for Hillary for not doing more for herself, not standing up for herself with him,” Frable said. “That’s more damaging than goofball words Trump came up with.”

However Frable thinks of feminism—and this is not the lipstick variety–Hillary’s behavior does not represent it. How can a woman who put up with a philandering husband expect the support of women? Hillary did not “stand up for herself,” as Frable sees it, and thus is no model for herself and her daughters.

“I’ve been paid the same as men, I’ve managed men,” Frable said. “I’ve not had any trouble working with men.”

So as Frable sees it, she has passed the feminism test that Hillary failed.

This, finally leaves us with two dilemmas. Hillary’s legacy is the first one. She could be seen as an early feminist; a pioneer feminist. She faced challenges no woman of her era had ever faced. She used the earlier successes of the feminist movement as her guide and added new experiences and new successes to it. Frable might very well have said of her experience as a workplace feminist, “I have succeeded because I stand on the shoulders of the giants of the movement who preceded me and who made my success possible.” She could have, but she didn’t. She saw Hillary’s kind of feminism—Celia Mason’s kind of feminism—as outdated and unnecessary. Especially when an attractive new “kind” of feminism (Ivanka’s kind) is available.

The second dilemma brings us back to Ainsley Hayes. She too is “post-Hillary.” Not only that, she has rejected Ivanka’s “kind” of feminism and every other “kind” of feminism. Ainsley might have said that the day when there are recognized kinds of feminism has passed. That might have been necessary for the pioneers, but today, every woman is free to invent her own approach and free, also, to call that approach, “feminism.”

The word, in other words, ceases to have meaning in the sense that it identifies some behaviors as falling within the category and others as falling outside. For Ainsley, the day of “categories” is over.

So what does that mean for feminism? It’s hard to say. If feminism allows women to

recognize some women as feminist and others not and also to claim women who are pursuing that understanding of feminism as sisters, then it will continue to be powerful as a movement. “We” will refer to “other women who are feminist in the same way I am.” There is no reason to refer to the approach of other women as “wrong,” only as misguided. “We,” my sisters and I, can show them a better way. I think feminism as a movement will require distinctions that function in that way.  If the women in this picture call each other “sister,” the movement model will continue to be powerful.

Or, alternatively, maybe Ainsley is right. The day of “kinds” of feminism is over. Every woman today is the beneficiary of feminists who have gone before her; she is also free to choose her own path and to call that path “feminism.” There are no more “kinds.” If I call it feminism, it is feminism. That makes Ainsley’s answer to Celia the perfect post-movement answer: “What kind? My kind.”

There is nothing about this imagined end to the “kinds” of feminism that means women cannot continue to work for broad economically defined goals, like equal pay and generous maternity leave, the kind that does not sacrifice the post-maternity career. But these are economic goals and the goals that are dealt with in these examples are cultural goals; they are goals that raise questions of personal style.

[1] There’s a good reason for the quotation marks around “kind” and also for introducing Hillary Clinton into the discussion.
[2] I’ve never heard the term. I get it. It’s a play on the Marxist notion of “commodity fetishism,” which makes it both a clever play on words and a refutation by obscure reference, which is certainly the easiest kind of refutation.
[3] Ginger, (Kim Webster)who is seated at the desk next to Celia tosses in, “I call it stiletto feminism,” which is even more provocative.