Hey wait. There IS another way

I love those moments when the familiar options suddenly turn themselves inside out and everything looks instantly different. Daniel J. Levitin gave an amazing example in the New York Times of March 25 (here) and I have been looking for a chance to celebrate what he did. Here is the line that sold the article to me.

This is going to be a piece about guns to a certain extent. That is the narrowest and least important focus. The next larger focus is going to be about being aware of your alternatives. That’s the difficult one. And finally, the last and most general focus is understanding how your sense of the alternatives is shaped and constrained without your awareness and certainly without your consent.

We’ll look first at the situation as Levitin describes it; then at the alternatives as they seemed to him at first. Then, finally, how he escaped that trap and how those familiar and bad options turned themselves inside out and gave him some new choices.

Here is the way Levitin sets the scene.

I was working at my desk the other day, overlooking my front yard, when I saw a man walk by the window and around the corner toward the back of the house. He was in his late 20s, wearing a rumpled gray sweatshirt; I’d never seen him before.

I waited, expecting him to come back around, since there is no other way out. When, after a few minutes, he didn’t reappear, it dawned on me he could be a burglar. There had been postings on Nextdoor.com about break-ins. I looked out the back window and saw him, systematically peering into windows.

Then Levitin got his gun and loaded it and called the police.

At that point, he begins to wrestle with his options in a way that brings us to the line that caught my interest. Here is that line again, this time with context.

Then it hit me. There is another way: I could simply get myself out of the house. Then there’d be no confrontation.

I sneaked downstairs, left through the garage door and waited on the corner of the street. Standing there, I realized: There is nothing in my home worth a man’s life. They are just material possessions. I can defend my life if called upon, or the lives of my family, but I don’t need to defend my stuff by shooting someone. That’s just crazy.

In this story, Levitin rushed down the path where his fears led him. What would I do, if it came down to it, in the nightmare scenario? The intruder and I are face to face and we both have guns? If you take that scenario for granted, the next question is, “Am I willing to kill the intruder to prevent him from killing me?”

Of these two bad options—and if you take the scenario for granted, they are the only options—which will I take? Then maybe you move on to whether you would be willing; would you have the courage?” Now it’s not a question of strategy anymore; now it is a question of character. Do I have the character to do what needs to be done. Am I “man enough?”

Why not another decision?

Just what decision is before us always seems clear at the time. That is because, as I 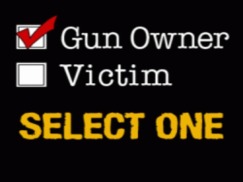 indicated above, the decision situation derives directly from things you aren’t aware of at the time. “The situation” is concocted of stories you have heard, movies you have seen, arguments you have had, your own attitude toward yourself, your self-confidence or the lack of it. So the set of options—should I shoot or not if it comes down to that—seems very present. It seems clear. And it should seem clear. These are all things you are experiencing.

As that bears on this intruder scenario, Levitin can experience his fear and he can clearly anticipate the alternative he things he will be facing. But if the basis of his is experience is distorted, then the alternatives he thinks he has will be distorted as well. There is every reason to push beyond those apparent alternatives. Every reason to. But not much motivation to. Not when you are afraid. That is what makes Levitin’s experience so remarkable.

But what you see and hear is affected greatly by other things. I walked home from the bank recently with $5000 in $100 bills in my wallet. I was just transferring it from one account to another, but the familiar walk from the bank to our apartment simply bristled with danger. People stood closer to me than usual. People took longer to pass me on the sidewalk than usual. People looked at me with an unsettling interest—not something I had experienced before on that familiar street.

What’s going on? You know, of course. I was imagining all those things because of something I knew (I had all that money in my wallet) that no one else knew. Of course. I agree. But I assure you that I experienced what I experienced. My sense of “what is going on here” was substantially distorted by the money I was carrying.

The same thing would have happened had I been carrying a gun. [1] My awareness that I was carrying a gun would distort all my perceptions into “gun-relevant” channels. I wouldn’t feel that I was being more aggressive. I would just be scanning the environment for threats. I am prompted to be unusually aware of threats because I am carrying with me a response to those threats.

I like this story because Levitin escaped from the trap that his gun laid for him. Suddenly another question became available to him Am I prepared to kill another human being just to protect all this stuff? Of course not. In that form, he rejected it instantly.

I think that is simply amazing. This is a story that needs to be told and retold. It isn’t that there are no conditions in which using a gun would be acceptable. It is always better to choose the lesser evil when both the choices are evil. But when you say “both choices” and “lesser evil” you are thinking of only two choices. How did you get restricted to two choices?

What is it that is keeping you from realizing that there may be other choices, entirely different choices? Whatever it is, you need to be willing to realize that there are other options while you are still in the situation. “Then it hit me,” says Levitin, “There IS another way.”

[1]  Here is some unsurprising but well described research on the effect of guns from Jessica Witt and James Brockmole at Purdue.

4 Responses to Hey wait. There IS another way