I saw it with my own eyes

I didn’t hit any serious theory about how we see things until I hit grad school. Then we paid a great deal of attention to Gestaltists—illustrations, explanations, and most fun of all, experiments. I liked it all, but at the point where a lot of my peers were saying, “Wow! Imagine that!” I was saying, “Well…sure.” Because I have been a birdwatcher nearly all my life and I know just how wrong you can be.

I saw a young woman taking a picture of a young man with her camera as they rode together on a MAX train in Portland. I saw it all in a single glance, so I am going to try to give you an approximation of that experience by reproducing the picture in a very small size and asking you to just glance at it.

So think about that a minute while I tell you about birdwatching. Most of the time when you are looking at a bird through binoculars, you have some idea of what it is and a broader notion of what it might be. And rather than just “seeing what is there,” you find that your mind offers you one plausible rendition after another after another. If it ought to have a yellow throat, for instance your eye will choose the yellow of a flower from the background and “place it” onto the throat so that you have a momentary glimpse of the bird with the yellow throat. And you have to be patient and disciplined to see whether the yellow you saw on the throat—you really did see that—actually IS on the throat.

Gestaltists call it “constructivism,” meaning only that the mind assembles the elements of what you see and presents it to you as a finished product. Or, if you are more experienced, it presents it to you as a hypothesis. Any young parent learns to see the grin on baby’s face and disregard it and then to see the baby’s grimace as a sign that it is experiencing gas pains.  Why no one every thought to call that expression “a grinnace” I cannot really grasp.

The parent constructs the first reality, discards it, and constructs the second reality. When you get good at it, you have hardly any awareness of what you saw at first. That’s why we say “I thought I saw…” which I am calling mere equivocation.

So here’s the same picture at a more useful scale. This is what I saw when I looked back and it is why I decided to take the picture. 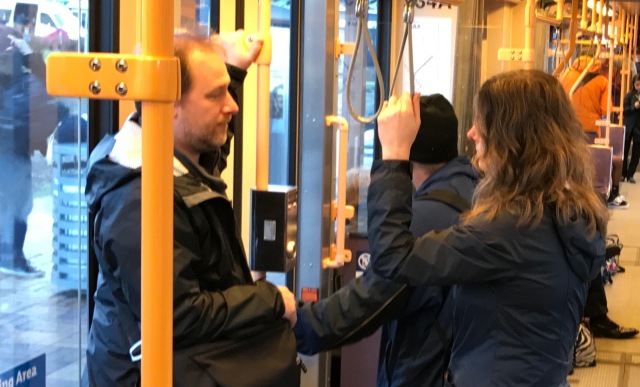 I’m guessing about the neurological strategies involved here, but I think I saw the woman’s hand being held up at what, you will agree, is an odd angle unless you see that she is holding onto a strap. Which I did not see. I could have, but I didn’t.

Instead–I mean literally “as an alternative”– I saw a camera in her hand. The “camera,” being supplied, I saw at second glance, by the black hat of the man standing on the other side of her. My eye made a hand + camera hypothesis, which pushed aside the hand + strap hypothesis.  “Hand + strap” was there to see, but I didn’t see it.

The camera in hand makes a lot of sense of the attention the man and woman are paying to each other and to the distance between them. So I took the elements of the hand and arm, the “camera,” the social grouping, the distance and I saw her taking his picture. And if you say that I couldn’t have seen that because it wasn’t happening, then I have some really good texts on the neurology of vision you ought to read.

And when you know that there is no necessary relationship between what you see and what is there, you start to wonder how well you would function as a witness when they put you on the stand and put you under oath and demand that you tell them what you saw. They would not be amused, I am sure, if you began by saying that we don’t really “see things” in the way the court imagines we do, but you have no objection to describing the several constructs your mind offered to you—one after the other after the other.

Today, it happens is the birthday of my brother, John, who is far and away the most gifted seer of things it has ever been my pleasure to know. Happy birthday, brother.

[1] We have developed several linguistic bridges in an attempt to mask this chasm. We say, “I thought I saw…” But if one side of the chasm is the elements of vision and the other is the meaning of what we see, there is not bridging of it.

3 Responses to I saw it with my own eyes