I wrote a piece on the word “racism” a few years ago. The first line was, “Am I a racist? No. I am not.”[1] Quite a flourish, I thought, for an essay that was going to propose a more modest and therefore more useful use of the epithet, “racist.”

One thing you might ask of an epithet is that it is supportable by publicly available evidence. People who call President Obama an alien on the grounds that he was not born in this country need to find some way to refuse to accept the evidence that he was. It doesn’t seem too much, to me, to ask of a word that it mean something.

But sometimes that is asking too much. Southern advocates for the equal rights of black Americans were called “Niggerlovers.” It is not a word that appeals much to evidence. For all the specific meaning it carries, it might just as well have been a belch. It is an epithet that translates to “I hate you” or possibly the more constrained “I hate what you are doing.” It does not extend to an actual meaning like “I am quite sure that the policies you are pursuing will leave the country worse off and here is why I think that.” 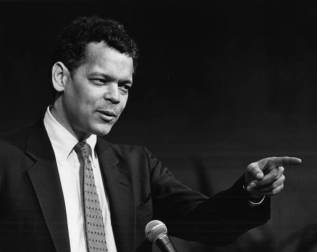 There is a story I attach to Julian Bond’s first experiences in the Georgia State Legislature. The way the story goes, Rep. Bond was the first black State Representative in Georgia and he wondered whether he would continue to be treated as a pariah when his vote made the difference between a bill passing or failing. He was not. When he carried the passage of a bill in his hand, he was treated the way the bearer of any other irreplaceable resource was treated.  He was actively courted.

And that is where I would like this inquiry to turn next. When you call someone a name—I am thinking here especially of names that have no empirically verifiable content—there is the risk that the person will accept the characterization and use it as part of his own guidance mechanism. You don’t want that.  What is the effect of calling someone a “racist,” for instance, or a “sexist” or, more generally, a “hater?”

We tend to think of those as names for deviations; if not deviations from the norm, at least deviations from the goals we would like to see pursued. In some cases, they could be justified as “true”—evidence for them can be cited—but that is a very thin justification for two obvious reasons. The first is that not everything that is true is a useful part of this situation. The second is that not everything that is true is helpful.  I think this kid’s question is a good one.  Besides, I think she is cute.

use it to draw the threads of this argument together. There is an approach to sociology called “symbolic interactionism.” I got deeply into it in grad school and have profited from it ever since. Here is a line I would like to share from the abstract of a paper presented at the American Society of Criminology. It comes from a paper, the short title of which (the part before the colon) is “Labelling the Labelers,” by Jeffrey Ward. The question is, “What happens to the individual after being labeled?” [2]

We can assume, I think, that the Georgia state legislators who approached Julian Bond to sway his vote, did not begin by calling him repulsive names. At the very least, they would have identified him as “a colleague,” and, given the extra padding that language often takes on in legislatures, “my esteemed colleague.” They might even have identified him as “someone who often votes against measures like this but who, we are sure, shares our concern…”

This is a social practice so obvious and in such wide use that it almost seems like a waste of electrons to spend this much time on it. But if labeling runs the risk of amplifying the deviance (“deviance” again, from the standpoint of the person doing the labeling) why do it? Why not use labels that have the effect of diminishing rather than amplifying the deviance.

By “diminish,” I do not mean “deny.” In the imaginary interaction with Rep. Bond, I had 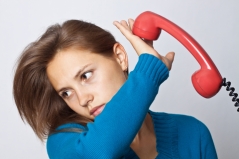 the legislators begin by recognizing that he often voted in a particular way, but they did that for two reasons. The first is that it left them free to argue that he and they had the same goal. Those other votes had to do, according to this strategy, with disagreements about means to achieve that goal, which of course “we all share.” The second is that it frees them to grant that those other votes might have been appropriate, but “this situation is different from those.”

Those are two very good and very common strategies for getting something done. They either avoid labeling entirely or they devise a label that emphasizes the common goals. These strategies work really well. It makes you wonder what important purpose is served by vilifying our political opponents.

Imagine, for instance, that there is one way and only one to pursue racial equality or the legitimate interests of women or to reduce the systematic disparagement of the elderly. One way. If you accept those goals but define them differently or pursue them differently, then you are a bad guy and deserve to be called a bad guy. But if there is more than one way, then people who agree about the goals and disagree only about the means, have every reason to find common ground. They have every reason, in other words, to treat potential colleagues the way Julian Bond was treated when he was the tie-breaking vote.

This is a deviance-reducing response. You still get to call it “deviance” in your mind because they don’t agree with you in every way and you happen to be a picky person, but your response reduces, it minimizes, that “deviance” in the service of a common agenda.

Leftists who call their opponents Fascists and Rightists who call their opponents Communists are engaging in deviance amplifying behavior. If these are people you are not going to be working with anyway [3] you can probably call them all the names you like. Every liberal wants to take away your freedom; every conservative is a “hater” of various racial, ethnic, gender, or age groups.

But the best time to cut a deal with potential colleagues is before you have consigned them to outer darkness, not after. After they have been excommunicated, there is not much reason for them to be willing to talk to you. So, obviously, a deviance minimizing approach is more likely to lead to civil discourse and to broad cooperation than a deviance amplifying approach.

I am not saying that “making nice” (West Side Story) is always the right thing to do. I am the guy who called our president “a pathological liar” and who spent some part of that essay justifying every part of that charge. I am not worried about amplifying President Trump’s deviance. 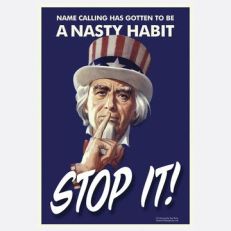 On the other hand, I live with some people and am related to some others, who think that Trump’s approach is the right way to go. Privately, I call those “misguided hopes.”  I assume these people can be talked to if someone on the other side is willing to grant them good motives and to work at showing them that the collateral damage of the movement they are supporting will be unacceptably costly to other things they hold dear. I think I owe them the Julian Bond treatment if there is going to be a time on down the road when we can work together. Besides, they are family and friends, not just fellow citizens.

[2] I provide a specific context for this meaning of deviance amplification because it means other things in other settings. It is, according to Wikipedia, “defined by media critics as a cycle of increasing numbers of reports on a category of antisocial behavior or some other ‘undesirable’ event, leading to a moral panic.” That’s not what I am talking about.
[3] Unless, of course, the people whose deviance you are amplifying own “a printing press” (Mark Twain) or a radio station or a twitter account. In that case, you have no idea who you are really talking to. There is a place for dramatizing how evil their behavior is, but that is not the way you want to approach potential colleagues.