How “it” really happened

I am going to wind up saying that I don’t know how it really happened and before you start pressing me on just what “it” I have in mind, I want to say that I don’t have one in mind. I do have an illustration.

Let’s touch down very briefly at recent at the chemistry of memory. According to the latest

reading I have done, memories are not “accessed” in the way a filed document is; it is “recreated” each time. One thing that means is that although pulling a document out of a folder—either the paper kind or the electronic kind—doesn’t alter the document at all,  recreating a “document” out of the elements of memory most certainly alters it.

That’s what I know about memory and chemistry; more than I know, actually.

Then I think of Annie Dillard’s lecture in Portland. A woman asked her, after the talk, to reflect on some aspect or other of her childhood. It seemed like a reasonable request to me. Dillard has written a very good book, An American Childhood, about that time in her life. But she shook her head sadly and said, “I don’t have a childhood anymore. I cannibalized it for spare parts.”

I knew exactly what she meant. She had ransacked her childhood memories for the details that would make the book work and now she doesn’t know what really happened anymore. I think I would have said that she had “commodified” her early memories, but I have probably read more Marx than she has.

My family is the kind that treasures the stories of our childhood. Mostly, we don’t remember the actual events that make up the story. What we remember is Mother’s retelling of it. Well, Mother had a goal in mind in shaping that story to begin with and a separate goal in retelling it over and over and probably yet another goal in writing it down in the form she wrote it in the books of family lore. Asking, after all that, “what really happened” is completely futile.

But I want now to tell you something that happened to me. I remember a couple of actual facts pertaining to the event—none of them particularly important. I had an experience I have been calling “a vision.” I call it that because I don’t know what else to call it; I don’t remember any visual part of the experience at all.

This happened to me in 1959 on a Friday afternoon in the spring. I had just finished teaching an 8th grade class in a suburb near Wheaton, Illinois (we called it “practice teaching” back then) and I was walking east across the parking lot to my car. “It” was instantaneous. I ordinarily say, in describing it, that “it” happened between the time my left foot hit the pavement and the time my right foot hit, but that’s just an accommodation to a narrative style. 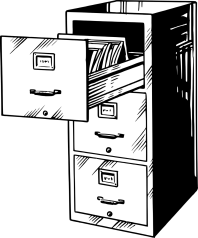 I describe it as a vision so that I can say what the vision was like. All of this is pure invention (except for the obvious debt it owes to Peter’s vision in Acts 10) but it enables me to say that something happened first and something after that, and so on. I say that I saw a great grey filing cabinet [1] coming down from the sky and a voice speaking to me. It might have begun, “Listen up, dummy.” Or not.

It said that the filing cabinet was made up of drawers, the drawers of folders, the folders of documents, the documents of paragraphs, the paragraphs of sentences, the sentences of words, and the words of letters. And it might have concluded with an admonition like “Look and understand and learn.”

Not only is that “all I remember,” it is all I have ever made up in telling the story over and over again. I have a really good memory for “how I tell that story about my vision,”since I have done it many times, but how I actually experienced “it” at the time, much less just what it was that happened, I have no idea at all. None.

However, “it,” whatever it was, transformed my life. I had been a less than mediocre student, going to a very good school. My problem, as I reflect on it, was that I didn’t have any notion of subordinating one fact to another. Headings and peripheral observations and subpoints and illustrations of the main point were all just “things to learn” to me. I dumped them into the same box and at test time, fished around in the box for some number of them and then presented it in as intellectual-sounding language as I could command. That had served me very well before Wheaton. Wheaton wasn’t buying it.

Immediately after “my vision” and ever afterwards, I have seen the structure of things—an argument, a description, a personal reflection—first, and then the major subordinate elements and then the minor subordinate elements, and so on. Just as “the voice” told me to do. I never got another bad grade, ever, and my career as an elementary and high school teacher and as a professor of undergraduates and graduates was transformed. I tried to teach them, with limited success I will say, the beauty to which my vision had pointed me.

Two years ago, I taught a course in “the Bible” at the First Presbyterian Church in Portland, Oregon (hereafter, “my church.”) The Bible! Daunting, you say? Not at all. There are two testaments, each of which is made up of “books” each of which, with an exception or two, is made up of chapters, which are made up of “verses” and so on. Does anything sound familiar?

As a class project, the members of the class wrote an essay in answer to the question, “What is the story the Bible tells?” I gave them a 300 word limit; they finished it in 284. Nothing of “the story” the Bible tells is left out so far as the scope of the story is concerned. They began where the story begins (Genesis 1:1) and ended where the story ends—not where the Bible ends. How did they do that? Well…about halfway through the 34-week course, I told them about my “vision” and we went from there. [2]

Since I have lived my life this way for—let’s see, in 2019, it will have been 60 years in the life of a man who won’t turn 80 until later this year—a long time and in that time, I have found little clippings that represent the approach in a more palatable manner. Here, for instance, is Max Eastman in The Enjoyment of Laughter.

The mind should approach a body of knowledge as the eyes approach an object, seeing it in gross outline first, and then by gradual steps, without losing the outline, discovering the details.

Then he gives an example.

A book on American history, for instance—I mean a textbook, for I am not talking about literature, thought, argument, or education in the full sense, but only instruction—should begin by telling in a few sentences the author’s conception of the significant form of that history as a whole, America was inhabited by Indians, Europe discovered it, certain phases of development were passed through, and we arrived at the Great Depression—not more than a page. [3]

So an overview of the Bible or anything else is a matter of structure first, then depth, then detail. I have just agreed to read a very densely written book called Jesus: Symbol of God by Roger Haight. According to my first quick pass over it, it is going to be really good and I chose it so I could discuss it with a resident here, who suggested it to me. We both like theology and I thought I should play in his yard before I invited him to come and play in my yard.

How to handle a book as dense and difficult as Haight’s book? No problem. You look over the way the book is laid out and choose the crucial spot. The crucial spot might be the methodological weakness or the part of his case that matters the most to me or the place in my own thinking that is the weakest and where I could use the most help. Any of those are potentially good criteria for choosing what to read first.

I chose Chapter 4, “The God of Jesus.” I could justify that choice theologically, but that’s not what this essay is about. That chapter is 31 pages long in small print and its internal structure is very complex. What to do? No problem. The chapter is made up of headings, right, and the headings are divided up into subheadings…you get the idea.

Over the years, I have devised a way of visually representing this approach. It looks like this.

And so on. 2a might be further divided into 2a-1 and 2a-2 by horizontal lines, but that is seldom needed and never very useful. There are, as you can easily see, four major parts to this “chapter;” the introduction and four substantive sections. The first section has seven subsections. The second section has 12, and so on. A, B, C, D provides the “outline” of the “chapter.” Subsections 1—7 provide the “outline” of Section A.

I taught this to my 8th graders beginning in 1960 and to my doctoral students beginning in 1998. In both cases, it was obvious to some, achievable by other, and completely mystifying to still others. I can do without the visualized table—although ordinarily I use it when I am working out the structure of something for myself—but I cannot conceivably do without the top down organization of the material.

And this happened to me between the time my left foot hit the pavement and the time my right foot hit. At least, that’s the way I tell the story.

[1] You remember filing cabinets, right?
[2] There were conflicts, of course. Some wanted this doctrine or that, this event or that to be included, but the absolute limit on words was pretty unforgiving and they had to perform a doctrinal triage, which rejoiced the heart of their teacher.
[3] In my few years at Malone College, I had the chance to teach American history several time and this is how I taught it. A single page first. Then the articles from the World Book Encyclopedia and from the Great Bolshoi Encyclopedia, telling the story briefly from the American and Soviet perspectives. Then two weeks spent in a short and well written American history, then, finally the course text.