Today, I feel like Yaskov, the Russian spy in Howard Neame’s 1980 movie, Hopscotch.

He says of his opposite number, the American spy, “I do like him, you know. One can’t help it.” The opposite number in Hopscotch is Miles Kendrick, played by Walter Matthau.  Like Yaskov, I just don’t seem to be able to help liking Nicholas Kristof. He writes a lot of things I find fault with (like his September 4 column) but it never occurs to me not to like him. And I liked his father a great deal. [1]

In Sunday’s column, “What religion would Jesus belong to?,” he has a point to make and he makes it well. In the process, he leaves a trail of dearth and destruction. Let’s look at the point and then follow the trail.

The general point is made in the first line: “One puzzle of the world is that religions often don’t resemble their founders.” He goes on to refer to Mohammed and the Buddha and even adds a rabbi (Rick Jacobs, the president of the Union for Reform Judaism) to cover what Moses might have done. But mostly, Kristof wants to talk about how far short Christianity has fallen from what he thinks Jesus’s original intentions were.

Jesus never mentioned gays or abortion but focused on the sick and the poor, yet some Christian leaders have prospered by demonizing gays.

To describe Jesus’s intentions more fully, Kristof turns to Brian McLaren’s book, The Great Spiritual Migration. So I’m going to let McLaren be the voice of Kristof for a few paragraphs.

“Our religions often stand for the very opposite of what their founders stood for,”

“…Jesus was a radical who challenged the establishment…’

Founders are typically bold and charismatic visionaries who inspire with their moral imagination, while their teachings sometimes evolve into ingrown, risk-averse bureaucracies obsessed with money and power.

“In the way Jesus is presented by some of his followers] he often comes across as anti-poor, anti-environment, anti-gay, anti-intellectual, anti-immigrant and anti-science. That’s not the Jesus we met in the Gospels!”

I have some reservations

The point, when it is eventually made, is going to be that Jesus was a certain kind of person and that his ministry had certain characteristics. Then Kristof and McLaren go on to say that we should be the kind of person Jesus was and that our lives (our ministry)—both personal and institutional—should be characterized by the same emphases as his.

McLaren/Kristof are offering a very strange Jesus. You would never know from this account, for example, that Jesus prayed. Or that he challenged the religious institutions of his day to be more accommodating and less censorious. Or that he anticipated that the world would end very soon and that his own ministry was a part of that gathering of events. Or that he had no social program in mind to help the poor—none at all. [2] Or that he felt himself to be in a uniquely intimate relationship with the God of his fathers.

Where did all that go?

There really isn’t any way to categorize Jesus simply unless the purpose of the categorization is to turn him into a tool of some sort. The bad guys in this column “weaponize” Jesus as part of their social program: opposed to women, opposed to the poor, wholly without compassion. The good guys in this column “instrumentalize” (I know “weaponize” would keep the parallel, but I just can’t manage it.) Jesus as part of their social program: attentive to the needs of the poor, responsive to the feminism of our time, global in its compassion for those who are suffering. I like the second set of programs much better than the first, but from a Christian standpoint, they are both idolatry

Let me ask the horrifying question at this point: what should Jesus be used for? For which of our contemporary social goals should he be used as a hammer or a saw or a screwdriver? I am hoping, in asking the question that way, to get Christians to wonder whether Jesus should be “used” for anything. [3]

One of the great rhetorical devices might be called “control of the alternatives.” It is used prominently in this column. Here’s an example: do you want to send a check to my organization today, or do you want to be complicit in the genocide of millions? The goal of such a formulation is two-fold. First it says that there are two and only two options (that’s what the “or” is for). Second, it glorifies the one option and demonizes the other. That’s how you present what look like “alternatives” and deny any choice on the question.

McLaren, for instance, offers us this set, which is much more generous than the horrific example I used to introduce this line of thought.

“What would it mean for Christians to rediscover their faith not as a problematic system of beliefs but as a just and generous way of life, rooted in contemplation and expressed in compassion?”

And then, just in case we missed it, he repeats it in a briefer and more memorable form.

“Could Christians migrate from defining their faith as a system of beliefs to expressing it as a loving way of life?”

Now wait. Don’t rush me. I want to take some time with this. Do I want to believe things or to adopt a way of life? Shoot! Why does he have to start with the hard questions?

Again, the “or” functions to instruct us that we must have one or the other. The notion, quite common in both the Old Testament and the New, that beliefs have their natural outcome in actions is entirely missing here. James (2:18) is not “anti-belief” when he says “you show me your faith apart from your deeds and I will show you my faith by my deeds. 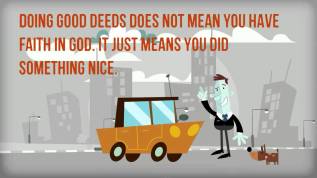 McLaren continues with a series of examples of beliefs as distractions—actually, he considers only that they will be distractions. He touches on whether biblical miracles are true as a distraction and, of course they can be. They can also be an invitation to modern Christians to place themselves in the 1st Century as receivers of the good news about Jesus. He contrasts questioning whether Jesus actually healed a leper (that’s the miracle) with focusing on Jesus’s “outreach to the most stigmatized of outcasts.”

There is no question in my mind that this social category—the most stigmatized of outcasts—is the category of most interest to Kristof and McLaren. I have serious doubts, scholarly doubts, about whether that is the way the gospel writers understood it and they did not present Jesus as understanding it that way. Again, the options are a) being distracted by doctrinal matters or b) doing something to help poor people. Think about it. Are those the options?

In all honesty, I have to admit that they can be. People can take hold of a faith that is intended to root the believer in God’s purposes and to produce the behaviors of neighborliness (see Luke 10 of the “Good” Samaritan.) and hold to one or the other. Kristof is protesting those who hang onto faith in a way that precludes action and he is praising those kinds of action that have nothing at all to do with faith.

You could argue—Kristof does argue—that if you have to have one, right actions (orthopraxy) is the one to have, not right beliefs (orthodoxy). What Kristof, both speaking for himself and in his citations of McLaren, seems unwilling to consider is that you don’t have to have one or the other. It is the business of all churches and the actual practice of many churches to teach that belief overflows into action.

I think that might be as close as we can get to the religion founded on the life and ministry of Jesus. It isn’t really the religion he would belong to; it is the religion that belongs to him.

[1] I think I started liking Nicholas when his father, Ladis, and I shared an office for adjunct professors at Portland State. Nicholas would send his father a pre-publication copy of a column. Ladis would hand it over to me, pretending to be casual about it and say, “Nicholas—Ladis was an east European, he would say Knee-ko-lahs, three very distinct syllables—wants to know what I think of his column.” That’s when I started liking Nicholas Kristof.
[2] That doesn’t mean he was opposed to social legislation. It means that he approved, as a general matter, of the social legislation in the Torah. One should, for instance, leave the corners of the fields unmowed so the poor could glean there or that one is absolutely forbidden to charge a fellow Israelite interest on a loan.
[3] General Semanticist (and U. S. Senator) Samuel I. Hayakawa used to say that there was a Chinese proverb that went like this: “The mind is a clumsy forceps and when it grasps the truth, it crushes it a little.” I don’t know whether there is such a proverb, but I know that Hayakawa used to say that there was. You can’t be too careful about Chinese proverbs.