The Return of the Austin-Boston Axis

It’s time to start thinking about the Hillary Clinton administration. The Republicans are. Here is an amazing paragraph from Thomas Friedman’s New York Times column this morning, August 31.

Politico last week reported that while some G.O.P. officials may vote for Hillary, they are already sketching plans “to stymie a President Hillary Clinton agenda.”

It sounds to me as if Friedman thinks that’s a truly awful thing. That’s not the way it looks to me. “G.O.P officials”—I assume those are the people who are being called “the party elders” these days—have lost control of “their” party. It has become the party of a wealthy enfant terrible, Donald Trump. They are embarrassed that Republican voters have chosen him and they are prepared to see him lose in a big way.

That’s where I think Friedman loses his bearings. Let’s talk about “the Republican Agenda,” meaning Speaker Paul Ryan’s agenda, which is the only Republican agenda I know anything about. To what extent is pursuing this agenda planning “to stymie a President Hillary Clinton agenda.” Are they the same thing? “Pursuing the Republican (Ryan) agenda” is the same thing as “obstructing the Democratic agenda?” It didn’t used to be that way.  Obstructing the Democratic agenda is more like Senate Minority Leader Mitch McConnell’s pledge that his “top legislative priority was to make Barack Obama a one-term President.”  Does that sound like a legislative priority to you?

There is some sense in thinking of “agendas” as opposed, but it makes a great deal more sense to me to say that policy makers are opposed. And why should they not be opposed? Isn’t that the value of two-party competition? 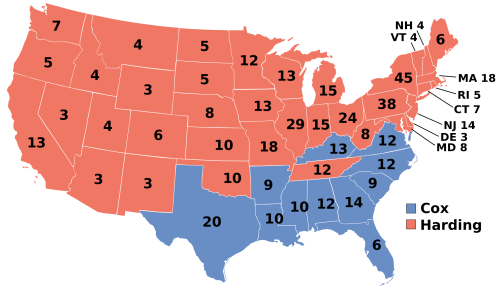 So let’s think back a little. Historically, the Democratic party integrated these two agendas within the party. There was a liberal northern wing, which ran the executive branch, and a conservative southern wing which ran (controlled) the legislative branch. Then there was a Republican legislative party that aligned itself with the liberals sometimes, mostly on supporting business and with the conservatives sometimes, especially on social issues.  That blue band across the south, normally including Tennessee, was the natural home of the “Austin” branch of the Democratic party.  Notice that everything else has changed a great deal.

You want clashing agendas? Here are three. And because of the seniority rules in the House of Representatives, all the crucial committees had conservative Democrats as chairmen. So the northern plus southern wings worked just fine for electing presidents—the famed Austin-Boston Axis—but not so well for progressive social legislation. It was slow, but it was not frozen—except for civil rights.

Now let’s imagine that Donald Trump loses as badly as the pundits are saying he will. How is that different? A lot of conservatives can go back to the Democratic party which, until the ideological realignment of the 1960s was their natural home. The Republicans can just give up on the presidency, except for the odd election here and there, and go back to policy participation in the Congress and in the Executive Branch. And, for the purposes of passing legislation, we’ll be back to the old three party system: Northern D’s (liberals), Southern D’s (conservatives) and R’s (aggressive on business issues, conservative on social issues).

How is that different? 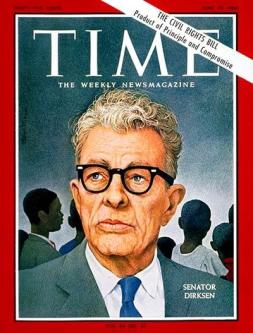 Well, it is different in one way. Sen. Dirksen was famous for “delivering” the Republican vote in the Senate on the 1964 Civil Rights Act. That wasn’t what he wanted to do at the beginning of the process, but he stayed with it and kept talking to his R colleagues and at the end, delivered the votes.

Friedman characterizes the current stance of policy makers as very similar to the “politics of the Middle East” which just alternates between the two “modes of zero-sum, rule-or-die thinking.” That’s not quite what we have in Washington. We have “I will keep you from ruling, at whatever cost to the vital concerns of the country.”

Friedman’s proposed solution, which I like very much, is that the Republican elders give up on their project of a breakaway, ideologically consistent conservative party and become, again, a part of the government with a different set of policy priorities. It requires that Hillary move to the right, just as Bill Clinton did, and recognize some Republican demands.

We know now that “there are no red states, there are no blue states” is a strategy that was too ambitious for us. It would have been nice, but it required a new way of thinking. That’s too much. But “getting the country moving again” would be nice and if there are any Republican party elders left, leaders who have not been Trumped, let them speak now or forever hold their peace. Hillary, the ball is in your court and if you do this right, you may get to nominate as many as three associate justices.

[1] That’s the way he used to say it, as I remember. It was part of his “good ol’ boy” schtick. For his book title, he cleaned it up just a little. There’s Nothing in the Middle of the Road but Yellow Stripes and Dead Armadillos, and then he gave it a subtitle: A Work of Political Subversion.