That’s just the easy way to say it. The title David Brooks actually gave to his column in the New York Times is “Livin’ Bernie Sanders’ Danish Dream” but I think the title I used captures Brooks’ message more clearly. You can see Brooks article here.

In this piece, I would like to contrast what Brooks likes about America [1] with what he is willing to “pay” to have it. “Pay” is in quotation marks because for the most part, it isn’t Brooks who will do the paying. So here is another way to say it. Brooks thinks you should like the things he likes about America so much that you will be willing to continue to pay the price of keeping them—and it really is you, not Brooks, who will be paying the price.

There is another way of looking at this, of course. I am going to be relying on information that I found first in Richard Wilkinson’s TED lecture. If you want to invest a few minutes in understanding why Brooks’ cozy attitude toward “America” is so perverse, this lecture will do the job for you. Go to TED.com and enter the search term “Wilkinson.” [2]

This chart is set up so that the most unequal states (“highest in inequality” are furthest to the right.  You can find the U. S. way up there in the top right corner.  This particular chart is calibrated on the left margin in infant deaths.  The higher we are in the chart, the worse off we are.  We are the only nation even approaching 7–that’s seven infant deaths per 1000 live births.  Denmark is relatively high for the social democracies of Europe.  I think it would be really nice to be below the line, like Germany, the Netherlands, France,  Norway, and Sweden (at barely above 3).  When I talk about “being willing to pay the price” for Brooks’ coziness about “America,” this is part of the price I am talking about.

I think it was that coziness that first snagged my attention. You have the hyperlink to the whole column so I’ll just pick a few of the coziest.

There’s nothing wrong with [Denmark]. It’s just not the homeland we’ve always known.

First, “homeland” is the affection-word you use for the country of your birth. It’s “the Fatherland” or “Mother Russia.” [3] It’s “the South” with “our peculiar institution.” That’s the term by which slavery was known in the South before the Civil War.  “Homeland” is not a word calculated to invite thought.

Here’s note of reality for you. The United States’ rank in the list of nations who assess how happy they are is #69. You can download the whole report if you’d like here.

The hyperlinked source is a lot of work.  The Wikipedia chart is easier. Google “rank order happiness of nations” and pick the first one listed. Here’s the short version. Denmark is #3. All the northern European social democracies are in the top 10. We are at #69.  Hello?That is two below Russia; 10 below Uzbekistan; 20 below Ecuador; 30 below the Czech Republic; 40 below France; and 50 below Belgium.

To me, that makes “the homeland we’ve always known” look like we could do better if we tried. Of course, happiness isn’t everything and, in fact, Wilkinson doesn’t include it in his report. That was just an appetizer.

There has always been a broad consensus that a continent-size nation like ours had to be diverse and decentralized, with a vibrant charitable sector and a great variety of spending patterns and lifestyles.

I think I would put it differently. There has always been a broad consensus that we want to make decisions for ourselves, rather than having them made way off in Washington. We don’t really value “diversity;” we value autonomy. But we have been willing to give up some of that autonomy to gain other things we value. We traded away some autonomy for social justice (civil rights); for an economic safety net (social security); and for protection against terrorists (airport security provisions).

The question is always “What could we get if we were willing to allow more decisions that benefit the society as a whole?  Is it worth letting go of some local control to gain those benefits for the whole society?”  People will say Yes or No as their inclinations move them, but to focus only on what we would give up, as Brooks does, without even considering what we would get in return, is not a reasonable way to ask the question.  It is, in fact, a bad question–and that’s not something I am often willing to say about a question.

We do have a “vibrant charitable sector” and we desperately need one because if those sources were actually taxed, we could provide services for citizens as a matter of right as they do in…let’s see…Denmark. All over northern Europe, actually. They do the same in Germany and for the same reason. “Charity” turns out not to be something you can count on and people who are poor and hungry and homeless and under-skilled really do need something they can count on.  Charity is nice, but it isn’t getting the job done.  I think even Brooks would concede that much.

What could we get if we were willing to tax ourselves—not just the rich, as Brooks is careful to point out, but the middle class as well ?[4] We could do some wonderful things. Here’s a gesture toward “middle class,” just so we don’t get lost. The three middle bars on this table account for 46.49% of aggregate income in the U. S. That is a plausible understanding of “middle class.”

And if you look at what is happening to the gold colored bars across the dates shown, you will see that everything is headed down.  The middle fifth of the distribution had 17.30% of the aggregate income in 1967.  By 1979, that was down to 16.80%.  And by 2010, it was down to 14.60%.  And I am quite sure it is still going down.  In fact, you might notice that all the colors are going down–except, of course, for purple, which keeps going up 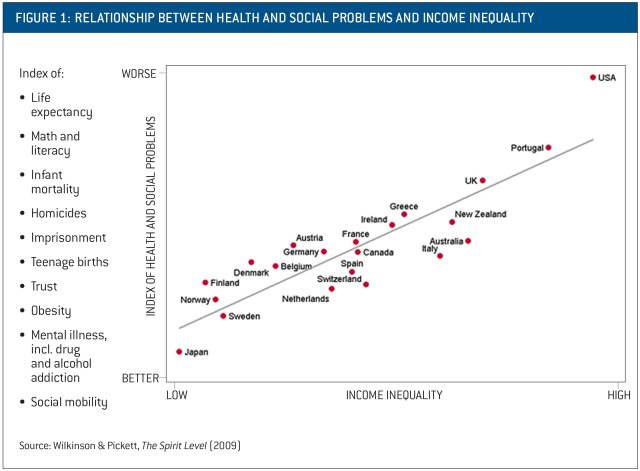 Again, begin by finding the United States.  We are at the intersection of High (lots of income inequality) and Worse (bad outcomes).  You can read them as well as I can.  What would you like to have?  Fewer homicides?  I would too.  Denmark, by the way–bad Denmark to which and Un-American Bernie Sanders aspires–is down at the other end of the chart at the intersection of Low (not so much inequality) and Better.  What else?  Social mobility?  More at the lower left.  Life expectancy?  More at the lower left.  Trust?  There’s vastly more in Denmark.

Do you really think that Americans, asked to choose the outcomes they would prefer for their country, wouldn’t say, “Sure, we’d like to have more homicides and more social mobility and higher life expectancies, and more trust.  Who wouldn’t?” I think that’s what they would say.  It’s what I say, too.

But we don’t get that question.  We get names like Socialism, which a lot of Americans think refers to Soviet-style dictatorships.  Where do you suppose they got that idea?  The presidential candidate who says it would be great to move in that direction is told, as nicely as possible–David Brooks is very polite–to move to Denmark, where he can have all he wants.

[1] When we are talking emotionally, as in “land of the free and home of the brave” we say “America.” When we are talking politically, we say, “The United States.” That also distinguishes Democratic presidents from Republican presidents, by the way. The last line of the State of the Union is “God bless America” if the president is Republican and “God bless the United States of America” if the president is a Democrat. The single recent exception is the time Barack Obama ended with “God bless these United States of America,” an exception for which I have no explanation at all.

[2] The whole argument is in book form as well. See Richard Wilkinson and Kate Pickett’s book The Spirit Level: Why Greater Equality Makes Societies Stronger.  A “spirit level,” by the way is a carpenter’s level, where you keep the bubble between the lines.
[3]There is a World War II joke that fits here. Hitler decided to attack the Soviet Union, only to discover that he had attacked Mother Russia by mistake.
[4] “Middle class” is a notoriously inexact term, but recently, it has been capped at $250,000. You really aren’t “middle” if you are making more than $250,000 a year.