Trump: Not So Much a Candidate as a Tantrum

I have ranted in one setting or another recently about the movie Inside Out, which nearly everyone has found to be delightful and which no one, myself excepted, has found to be dangerously subversive. Today, I would like to make another pitch that the premise of the movie subverts what we care about most in our fragile American democracy and I would like to look at the Donald Trump Phenomenon as the example.

We call our kind of government “representative democracy.” [1] By that, we mean that the people elect people to represent their interests and that these people operate the government with the interests of their constituents in mind. [2] This presupposes both a) that the constituents will know what their interests are and b) that they will choose representatives (now including both the Senate and the President) who will enact public policy with those interests in mind.

We are nowhere near that at the moment and I would like to point to the Pixar film, Inside Out, as an illustration. The movie is about how five emotions collectively construct the life 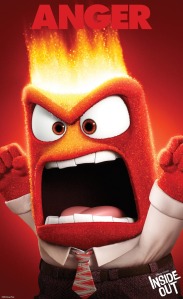 of a little girl named Riley. These emotions do not have “interests,” of course, because they don’t have intentions. As a result, Riley does not have interests based on intentions. Riley’s behavior represents the dominant emotion at the time.  Here, for instance, is Anger.  A few paragraphs down, I will offer Trump himself.  See if you can see the similarity.

OK, that brings us to tonight’s “debate” among the candidates for the Republican nomination and particularly to Donald Trump. Does the Donald represent Republican voters?

Well…yes and no. He represents the way they feel. He probably will not represent their hopes for public policy. He may not even represent the kind of party they want the Republican party to be. But in Inside Out, how you feel is the only thing that matters and if that holds for Republican voters, I think the best short answer is “Yes. The Donald represents Republicans better than anyone else.”

I got to thinking in this direction based on a piece Jonathan Chait wrote for New York Magazine. Here’s a piece. You can see the whole article here.

The current moment of enthusiasm for Donald Trump is instructive because it pulls the [ideological and emotional] strands apart. Trump’s appeal reflects, in nearly singular form, the nonideological component of Republican rage. He is the candidate of affect.

This is galling, Chait writes, for Republican officeholders who have acquiesced to every demand for “ideological purity” from the Republican base.

Republicans have dutifully complied with every policy demand. They have refused to increase taxes, even at the cost of programs they support, like infrastructure and defense. They quickly withdrew cooperation from all of President Obama’s legislative initiatives, opposed virtually all of his nominees, and joined self-destructive demonstrations of anger they knew would fail.

They have done all this, and now a candidate who has refused to do any of it has surged into the lead. The Republican primary electorate has demanded that candidates be good little boys and they have given their hearts to the baddest little boy around.

And here is Chait’s very best line. See what you think.

His affect supplies his appeal — he is strong, mad, and, above all, unapologetic in a world that demands he apologize. Trump is not the spokesman for an idea at all, but the representation of undifferentiated resentment. 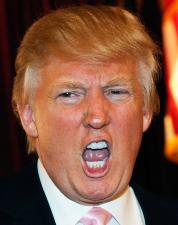 this any more,” from the movie Network. (You can find it and 99 other beauties on the American Film Institute’s 100 best movie quotes.) This is a newscaster urging people to open their windows and yell his line out into the dark. It’s great catharsis. It’s no way to choose a president.

It’s easy to say bad things about Donald Trump, but if he really represents us, then we are the ones about whom bad things should be said. Trump is betting that that will be enough. The horrible possibility is that he might be right.