A Parent is a Teacher, not a Concierge

I am going to look at that bold title through the lives of Walter Possum and Frances the Badger. Or, rather, through their parents, whom I admire almost more than I can say. These wonderful parents come to us from the mind of Russell Hoban. He published Bedtime for Frances in 1960; Nothing to Do, the only Walter Possum book I know of, in 1964, and A Birthday for Frances in 1968. I became acquainted with these books in the late 1970s. I love these parents because they are warm-hearted and nurturant, for one thing; also they keep a consistent focus on what the child needs to learn and how they might help that happen.

On the other hand, parenting is a little more demanding these days and different norms define what “doing it right” looks like. I have begun to see the term “concierge parent” in use, and the intended analogy with a hotel concierge makes my blood run cold.[1] The concierge’s job is to please the guests; the parents job is to grow human beings. Surely the same set of tricks wouldn’t work for both. They wouldn’t, would they?

I want to explore just how Mother and Father Badger (and Mother and Father Possum) are so successful. The gender stereotypes are not current. It’s kind of a “Leave it to Badger” social setting. The tactics of parenting, especially of the fathers, do not fit the concierge model well at all, but in these stories, everything works. [2]

I’m going to start with a quick description of some events from the three books. I have chosen three of the “where the rubber meets the road” moments. These are the moments at which crucial decisions are made by the parents. Then we’ll back up and try to place these events in a sort of “theory of parenting” model. There might be a drawing of morals after that.

Episode 1: In Nothing to Do, Walter Possum wakes up one Friday morning and discovers that he has nothing to do. He rouses his father, who, unaccountably, is still sleep when it’s almost 6:00 already. Father doesn’t say a word. He goes outside and gets Walter a rake and a basket and tells him to rake leaves.

Then, when Father is leaving for work, Walter approaches him again.

“Raking leaves is not really something to do,” says Walter.

“Well,” says Father, “ I am sorry to hear that, but I have something to do. I have to go to the office, and so I cannot talk about it any more right now.” [3]

The next morning is dedicated to housecleaning, so everyone needs to be somewhere else. [4]

Walter objects. “I have nothing to do and Charlotte [little sister who speaks in bold font only] follows me all the time.”

“I know all about that, says Father, “but you are going to play outside anyhow.” And he went out to the tool shed and hoped for the best.” [5]

The plot goes on from there. It is, in my reading of it, quite sophisticated, but what the 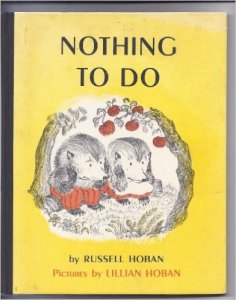 stone actually does is not relevant here. and we have two more episodes to consider. This story is based on Father’s gift to Walter of a “something to do” stone. It’s magic. You keep it in your pocket and when you have nothing to do, you rub it and look around and then the stone gives you [!] something to do. [6]

Episode 2: In A Birthday for Frances, [7]we find Frances’s nose seriously out of joint because it is her sister Gloria’s birthday and Frances wants it to be HER birthday. Again. Frances is hiding in the broom closet with her imaginary friend, Alice. What she really wants is for Gloria not to have a birthday celebration at all.

Preparation for the party goes on. That’s the important part to me. We do not break off preparations for negotiations with a disgruntled child.

Mother: Frances, wouldn’t you and Alice like to come out of the broom closet and help us make place cards for the party?

Gloria is drawing rainbows and happy trees on her cards.

Preparation for the party goes on.

Frances is outside sulking and looking through the window at Mother wrapping a present for Gloria.

She says, “I am not going to give Gloria any present.”

“That is all right,” said Mother, and Frances began to cry.

“What is the matter?” said Mother, “Why are you crying?”

“Everybody is giving Gloria a present but me,” said Frances

Frances is on the outs with everyone all the way through the story until the end. Everyone (all the adults) are very solicitous of Frances’s feelings, but the preparations for the party go on all day. The result is that Frances is confronted with an event that is going to happen no matter what. The event is guaranteed by people who are relentlessly nice to her. She is invited at every step to join in.

Episode 3: In Bedtime for Frances, the question is all about facing nighttime fears. Frances does everything she can to get out of bed and do something else. 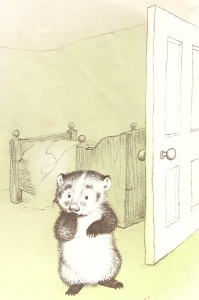 She thinks that maybe she can see a tiger in the corner of her room, so she goes to find her parents. The parents determine that the “tiger” did not bite or scratch Frances; they decree that it must be a friendly tiger, and direct Frances back to her room.

Next she sees what might be a giant over by the chair. This gets her to the living room and it gets her a piece of cake, but the advice she gets is to ask the giant what he wants, at which point she determines that it is her bathrobe on the back of the chair.

After that, there is a scary looking crack in the ceiling. This gets her to the bathroom where Father is brushing his teeth and she gets to brush her teeth too. But she is sent back with the suggestion that she enlist help in watching the crack for awhile.  Her Teddy Bear helps.

Then the curtains at her window are moving so she goes in search of adult consolation, but finally, she has reached the end of the road. She wakes her father up to tell him about the wind. Here is what happens.

[It is the wind’s job] to go around and blow all the curtains.

How can the wind have a job? said Frances.

Everybody has a job, said Father. I have to go to my office every morning at nine o’clock. That is my job. You have to go to sleep so you can be wide awake for school tomorrow. That is your job….

I will be out of a job? said Frances.

I will get a spanking? said Frances.

Good night! said Frances and she went back to her room.

So there are the three episodes. Let me draw together what I think of as the essential elements. Walter Possum has boredom to confront. The job his father gives him isn’t really “something to do,” so the next day, Father gives Walter a “something to do” stone and with the aid of that stone, Walter plays actively and socially all day. “Socially” comes to include his obnoxious sister, Charlotte, for whom Walter invents a “play right here” stick because he has come to understand how a “something to do” stone really works and makes the necessary adaptations.

Frances comes to grips with a birthday party she does not want, but for which preparations go on all day. She is invited to join at every point and says No at nearly every point, but preparations continue. Eventually, it gets to be Yes or No time for Frances and because her parents have not made themselves the issue, Frances has to decide to do the right thing just because it is the right thing.

Frances comes to grips with her night time fears because she is given a rationale—everybody has a job—and a credible threat which returns her to the real issue. The threat comes from extraordinarily indulgent parents, but eventually Frances is forced to face the fear. The wind is doing his job, she decides, and the moth at the window his job, so she lies down in her bed and does her job.

The “something to do stone” and the repeated invitations to join in the birthday celebrations and the threat of a spanking all do the same thing. They wouldn’t in every family, but they do in these families. They are not “loving too much,” an expression I have written about recently, or too little. It is love that takes the needs of the young person into account and also their need to address the issue that confronts them.

[1] Here are a few phrases Rob Lazabnik’s piece in the Wall Street Journal from July 24, 2015. He says, “You see, these children are members of the Most-Loved Generation: They’ve grown up with their lives stage-managed by us, their college-acceptance-obsessed parents.” and “All those years being your kid’s concierge and coach have created a monster.”  The cartoon comes from that article.
[2] He forgot to end with, “O-k-a-a-a-y?” as is done now, even at the end of commands. I am amazed.
[3] I’m going to include what I think of as the off-Broadway run of the Frances books and introduce Walter Possum and his baby sister, Charlotte. They are from the same world, the same writer so I’m going to just add them in.
[4] Mother is going to do the housecleaning. This is 1964. Who else is going to help with the housecleaning is not a topic for this book.
[5] “He hoped for the best” is striking in this context. I don’t recall any other authorial comment on what an adult thought—as opposed to what an adult did—in the whole Frances/Walter corpus.
[6] Provided that you don’t aren’t too close to the house when you do it (no playing inside) or standing too close to the pocket where Father keeps his money (a costs money thing to do). You have to be at the right place. Then the stone works.
[7] I just now noticed that although this is “a birthday for Frances,” it is not her birthday. It is “a birthday” she needs to come to grips with.