The bulk of this post is going to be the work of others. My part in it will be limited to telling you who those “others” were and saying why I am so excited about what they did that I wanted to share it here.  Here is the First Presbyterian Church of Portland, Oregon, where we met for so long and learned so much. 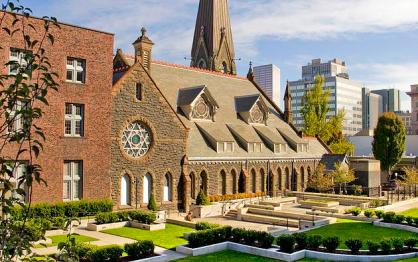 Two notes here, just as a background. First, the piece I am going to paste into the middle of this document is a narrative of staggering scope. It is an answer to the question, “What is the story the Bible tells?” So it is a document that is historical and doctrinal. It was crafted in the same way the great councils of the church crafted the confessions—think of the council of Nicea in 325 A.D. or the council of Chalcedon in 425 A.D. It was crafted, that is, with part of our attention on what we wanted to say, part of it on being consistent with other parts of the document, yet other parts on meeting the needs of the readers. [1] And finally—the best part for me—on the need to make this a compelling narrative. It is a kind of interest I call “rhetorical,” for what seem to me good reasons, but that cause others to shake their heads sorrowfully.

The second note is that the piece itself is richly theological. If you have theological appetites, you can satisfy them here. This post, however, is not theological; it is, if any one field can be charged with it, more pedagogical.

Here’s the piece. Nine of us, not including me, put this together under a spartan word limit. This is what they did.

In the beginning, God created the heavens,the earth, and mankind. Adam and Eve disobeyed God, resulting in a broken relationship with Him. Not giving up on mankind, God established covenants, including those with Abraham and Moses.

In the Promised Land, God provided for judges and kings, yet over the long stretch of their history the Israelites remained discontented. Unfaithfulness finally led to alliances that resulted in the exile to Babylon, during which the prophet Jeremiah told of God’s passion for reconciliation: a new covenant, through the coming of a Messiah.

An angel announced to the Virgin Mary that she would be with child, the foretold Messiah of David’s lineage.  John, the Baptist, prepared the way for the Messiah and baptized Jesus.  Jesus claimed to be the son of God, preaching God’s love and forgiveness through faith, not laws: fulfilling and supplanting the Mosaic covenant. His teaching, especially his parables, included messages of salvation and love.  He also performed many miracles.

Jesus’ ministry threatened the Pharisees’ status as well as Roman control.  He was crucified.  After his resurrection, Jesus came to his apostles and told them to preach his words to all mankind.  Jesus’ death and resurrection became the source of eternal salvation.

When the disciples were empowered by the Holy Spirit at Pentecost, they began to share with everyone the good news of God’s redemptive work in Jesus. The new church struggled to understand how Jews and gentiles could be united as followers of Jesus. In this united church, God made a way for all people who follow Jesus to be brought back to the relationship God desired. God had been seeking to restore this relationship ever since it was first broken.

If you are not inclined toward theology AND you read all the way down to here, this piece might have struck you as a piece of nonsense. It isn’t, really. It is an adroit summary and an interpretation of a very large story. And it is entirely orthodox, given the leeway of a shading of meaning here and there. And it does manage to tell a story. It has a beginning and a middle and and end. It has a motive and obstacles to its achievement and a successful conclusion.

If you are inclined toward theology, you will notice right away that although the old familiar ground is covered, it is covered in some unusual ways. “Sin,” for instance, is not so much as mentioned. What sin did, however, is the driving theme of the essay from beginning to end. And, to pick another prominent example,specific people are left out almost entirely. In addition to Jesus and Adam and Eve, four people (4!) are named. Abraham, Moses, Mary, and John the Baptist. And yet, in that survey, so very poor on names, they covered the covenantal history of Israel, the Incarnation, the official beginning of Jesus’s ministry, and the crucifixion and resurrection. Amazing!

How did that happen? [2] Let’s begin with just how preposterous it is. Depending a little on how you count them, there are 783,137 words in the Bible. We committed to 300. On the other hand, we had Max Eastman to go on.

A book… should begin by telling in a few sentences the author’s conception of the significant form of that history as a whole, [3]

So began with the idea that no matter how huge the story is, it bare outline of it can be told briefly. Afterwards, additions can be made to restore some of the lost detail, but those additions are made TO the narrative structure, not INSTEAD OF IT. Big difference.

Second, I picked 300 words as the limit because I guessed that would produce enough friction to motivate a meaningful triage, but not enough to blow the whole project sky high. It was a guess, but I’ve done this before (beginning in 1961) so it wasn’t an ignorant guess.

And it worked. In the first rounds, we specified a lot of people and indicated our commitment to a lot of doctrines. But as the space shrank, choices had to be made and at the heart of the choices were these two wonderful questions: a) Is A more important than B and b) Why?

These questions enable discussions about WHY a doctrine is important. What does it do? [4] It is that question that enabled us to deal with “sin” in lines one and two without using the word. We talked about what sin DID, not about what it was. They are both important, but if you are telling a story, the latter is more important than the former and we were telling a story.

Third, and finally, when we got down to the very end, we had to make decisions about “what is True” (notice the capital T) and what the story needs. When you are down to 300 words, what the story needs in order to work gets to be a really compelling matter. Valuable doctrines were left out—doctrines that meet the standard implied by the big T in True—so that the sequence of events could be clear and so that the motive would be seen as adequate to the needs of the story and so that it would end in the way the beginning promised it would end.

All those are concerns that no one—trust me on this—had in mind when we began. In fact I was surprised, myself, at how powerful it got as we threw one doctrine after another, one hero of the faith after another, over the side so we could keep the flow of the narrative intact.

So you might wonder, as Butch Cassidy did, “Who are those guys?” Those “guys” are nine members of a group at First Presbyterian Church in Portland, Oregon. They will have spent, by May 12, thirty-four weeks, working through the Disciple 1 program, offered by Abingdon Press. There is not a trained theologian among them. The amount of biblical literacy varied a great deal among them as did notions of what it means to call a text “sacred.”

They are, in all their wonderful and distinctive complexity, a group of ordinary people. And they did THIS. Wow! Amen.

[1] I did not appreciate this point sufficiently when we began the process of writing this. But there came a time when the members of the class pointed out to me that there was no way to decide finally on one emphasis or another, or on one phrasing or another, until they knew who was going to read it
[2] I am going to give you the short answer. A longer and more adequate answer would have to say that everyone worked really hard at it and some of the hardest work was letting go of treasured doctrines or persons. “You’re not going to tell this story without X are you?” Without “sin,” without David the King, without the ethical teachings of Jesus, without the richness of the Torah? Even the most treasured emphases were laid aside so that the work as a whole could be competed. That’s the longer answer to how it happened.
[3] Eastman had a history of the U. S. in mind, as his example shows (The Enjoyment of Laughter, page xv), but it works on anything you can shape as a narrative
[4]A crucially important question I learned from George Lindbeck of “the Yale School of Theology,” which is not so much an institution as an approach.