Everyone who has served in the Armed Forces of the United States is a hero.

Have you heard that? First I heard it as part of the ads for the armed services. Now it is commonplace in the patter of the sports commentators and very often a feature of the opening ceremonies as well. I am starting to hear casual references to it—to the taken for granted fact of it—on the bus or at a coffee shop. It’s so “true” in these settings that no case needs to be made; it just needs to be referred to.

There are so many things I don’t like about it that it’s hard to know where to start. Let me start with three and I’ll stop then and see if three is really enough.

I call the first one “bracket creep.” You might have thought “bracket creep” has to do only with tax categories, but I treat it as a much more general phenomenon.  If there were a formal designation for hero, we wouldn’t have this problem. “Winners of Purple Hearts” could be designated as heroes. That would go like this.

“See that guy? He’s having a lot of trouble walking now, but he’s a hero.

Really, when was he awarded the Purple Heart?

From a language point of view, this is a very satisfying exchange. Information is exchanged. Understanding is clear. “Hero” means “having been awarded the Purple Heart.”

And it wouldn’t have to be a Purple Heart. It could be any official designation; any commendation for bravery under difficult circumstances. If hero means “has received an official recognition for heroic actions taken” then we are saved from bracket creep so long as the awarding body keeps the same criteria.

That’s not where we are. “Having been employed by the Army [or any other branch of the military] for a period of time” is now the equivalent of the Purple Heart I referred to above. That’s “bracket creep.”

Difficulties run off in every direction. If every soldier is a hero, what designation should be give the soldiers who have received special commendations for courage under fire? Superhero? Won’t work.

You really can’t make everyone think of people who were employed by the U. S. government to be part of our national defense (our national offense too, of course) as a hero. It can’t be done.

What you can do is destroy the word.

Words are kindly things. They accept a lot of abuse without complaint. They are puffed up and then shrunk down and still they hang around in hopes of being useful. But the level of abuse they are able to withstand is still finite. You can destroy them.

I saw “disability” ruined right before my eyes at a state legislative hearing. The proponents of a bill had apparently agreed among themselves that “differently abled” was the right thing to say. They all said it themselves. They interrupted legislators who were asking questions but who did not say the right word. The legislators sensed—all the good ones have a kind of Spidey sense about offending do-gooders in public—that refusing to use “differently abled” would not be well received. So they said “differently abled” and rolled their eyes. They put “air-quotes” around it. They got together in the hallway afterwards and plotted revenge. They were not happy.

This is a difficulty the military will have to find a way to deal with because if everyone is a hero, no one is a hero. This use of a word works because it swoops down on a category and chooses some but not others, for a special distinction. The military really needs heroes. They can’t be happy to watch the category become meaningless. They will have to do something. Good luck, guys.

The second one is subjectivization. As in all these matters, the -zation part refers to something that has been done to

a word or concept. It was A and then the -zation process happened and it is now B. It was objective (A) and now it is subjective (B).  Is the oldest person in this picture a hero?

Subjective language is a wonderful thing. We would all be poorer without it. But we count on some things to be objectively true. The #1 Tri-Met bus picks riders up at the Southwest Fitness Center and takes them downtown. There is no value is saying, “To me, it always takes people shopping at Lloyd Center.” But when you get off the #1 bus, you will be downtown.

We can subjectivize “hero.” We can give up on the word’s having a common public meaning and rely on the meaning each of us gives to it. Here’s an example from the movie While You Were Sleeping.

Lucy You are a hero too. Every day, you give your seat on the train to an old woman.

Peter But that’s not really heroic.

Lucy It is to the woman who gets to sit down.

From a language standpoint, Peter’s case is better. In giving up his seat, he is doing something generous. Lucy is in the booth collecting fares, so she sees whatever happens on the train from some distance a

way. We don’t know how the old woman feels. The designation of hero shows how Lucy feels about Peter, or possibly about generosity.  Is the oldest person in this picture a hero?

Or you could just grant the subjectivity of it. “That seems heroic to me,” someone might say. Or “He’s a hero to me.” Or “She’s a hero to me,” since no one seems to say heroine any more.

So subjectivization “solves” the hero problem by making the word refer to how I feel about an act or about a person. It removes it from the public conflict about its meaning by removing it from the pubic vocabulary.

Language Digression: One feature of language in America is that we like to drop “unnecessary” words. If a given verb is always used in combination with a given noun, we just drop the noun. Baseball announcers who used to say that Terwilliger “reached first base” or “reached base” in the third inning, now say that Terwilliger “reached” in the “third.” After a little while, it stops sounding odd because the range of possible meanings is so small that everyone knows what he means. In basketball, point guards once “created scoring opportunities.” Now they just “create.” They need teammates, so they don’t really create ex nihilo—theologians everywhere breathe a sigh of relief.

So the third difficulty is that when we choose some general category as “heroic,” we distinguish the people from the people in other categories, who are now “non-heroic.” So who are our true heroes? The people who “serve” in the armed forces. Are

there “un-armed forces?” Is that kind of conflation of “service” and “force” something we want to support? Is military service really the only category we want to value as a category? Are we really no more than Sparta? Didn’t we once aspire to be Athens?

Are firefighters heroes? Medics? Teachers who work miracles no one else could with children everyone else has already given up on? Peace Corps? Women who hold together communities that would othewise lose any sense of belonging?  How about these guys?  Heroes?  Why?

Is “putting yourself in harm’s way” a crucial ingredient? OK. The Peace Corps volunteer comes home with malaria. The public service teacher, exposed to the daily catastrophes of inner city life give up hope and never recovers it. The women who hold communities together burn our after years of trying, during which time they have put their own families and very possibly their husbands is second or third place. 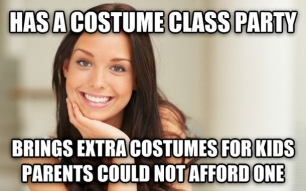 You want damage done to persons who are serving the public good? There it is. Nothing in any of those jobs is going to get those people a chance to board a flight early or get a free drink on board or to submit to the pro forma thanks of people who have been instructed to thank them for their sacrifice.  How about her?

So “hero” as a shorthand expression for members of any of the armed services, is not a good use of the word. It has at least the three difficulties I referred to above and many many more. And the difficulties it causes are systemic. You can’t ask people to solve them be “being more understanding.” And a really good word has its features scrubbed off and is filed on the shelf in the warehouse along with other words that once meant something.