I look at it as a goal. It’s the thirteenth step of my 12 Step Program.

In the expression “clean and sober,” clean is supposed to refer to the absence of drugs in your system and so 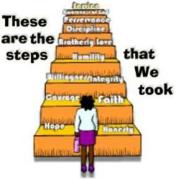 ber to the absence of alcohol. Drugs and alcohol are not my problem. My problem is continuing to read the gospels the way I learned to as a child—and continued until nearly middle age—even though it is an approach that I have consciously rejected for at least two decades. I just don’t seem to be able to stop.

Here are the steps I go through. These are what NOT being clean and sober look like for me. I’ll read a passage literally that simply cannot be read literally. There is a discrepancy and normally, my mind is attracted to discrepancies. If the hero’s hair is described as brown on page 39 and as blonde on page 132, it is common for me to stop and say, “Wait a minute. Wasn’t his hair brown at the beginning?” If it’s a gospel account, I don’t do that.

Why not? Well, I have already learned to read it the other way. and I simply don’t notice the discrepancies. Matthew says that Jesus came riding into Jerusalem (see Matthew 21:5) on two donkeys. Two. I am long past the place where I care whether there was one or more than one; I am past caring about how the prophet Zechariah (9:9) phrased it and why Matthew kept each half of the parallel rather than combining them. What I care about is why I didn’t notice.

Today, I don’t notice because I have learned not to notice. I read it the way I read it because I have always read it that way. So, in the second stage, right after noticing the problem, I read that passage and say, “Wait. That can’t be right.” Then I move right away

So then, in stage three, I pick my attention up in both hands and put it back on the trail it is supposed to be following. Why did Matthew use the Zechariah passage? What did he have in mind? What was he trying to say about Jesus? What does it mean for my understanding of Jesus that Matthew represents this episode the way he does?

Now that little sequence—the three little steps—could be read as a success story and in a small way, it is. And if it signaled a broad and lasting transition to this new way of appreciating the text, it would be. But I really really don’t want to have to go through those three steps all the time.

What I really want to do is to take my current view of gospel texts—they are associations of symbols, not of events—and read in that mode naturally. I don’t want to go through long periods where I ignore discrepancies I would have been attracted to in any other field of study. I don’t want to twist my brain into odd shapes trying to account for X on the one hand and Y on the other before finally remembering that I really don’t have to accommodate X or Y or vice versa. 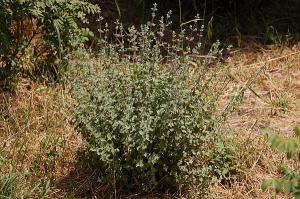 Maybe it’s time for another example. In John’s account, they put a sponge soaked with sour wine on some hyssop and gave it to Jesus. This is what hyssop looks like. It doesn’t look like the kind of thing you would choose to put a sponge on. Mark and Matthew both say they put the sponge on “a reed,” which at least implies something long and rigid.

Eventually, I get to thinking about how you put put a sponge on a fern. Think for a minute how much better it would be if I would just say, “Hyssop. Hmm. Why hyssop?” A little rummaging around in my memory would produce this text.

And then I would think of the blood of the lamb, which saves all those Israelites who obey God and put the blood on the door posts and I would see what imagery John is drawing from. The account John is giving us is rich with symbolism; it says about Jesus exactly what John wants us to hear. And…it doesn’t require sticking a sponge on a fern and lifting it up in the air.

That’s what I want. I want to say, “Hm. Hyssop. Why hyssop, I wonder.” I don’t want to wander down those alleys that lead to how strong hyssop stalks are or how toxic the digestive juices in a whale are (Jonah) or whether the ark would really have been big enough to add male and female unicorns to the menagerie (Noah).

4 Responses to Clean and Sober