Stanley Victor Freberg, the master of his craft

Stan Freberg died this Tuesday at the age of 88. He was one of the funniest men I had ever heard. He was known for his satire, but it wasn’t nasty satire. Mostly, he was just able to look at things from a different angle.  And he was a master.

In my favorite of all the Freberg productions, Stan Freberg Modestly Presents the United States of America, Volume I, he stages a confrontation on the beach with “an Indian.”

Columbus: Hello there, hello there. We white men–other side of ocean. My name Christopher Columbus.

Native: Oh? You over here on a Fulbright?

Columbus: Huh? Uh, no,no, I’m over here on an Isabella, as a matter of fact. Which reminds me, I want to take a few of you guys back on the boat with me to prove I discovered you.

Native: What you mean, you discover us? We discover you.

Columbus: You discovered us?

Native: Certainly. We discover you on beach here. Is all how you look at it.

It’s always that way. Freberg was able to imagine it from the other side. Freberg’s 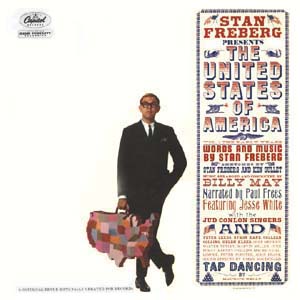 “Abominable Snowman” complained that he never like that word “abominable” that much but it was the closest they could get to the original abominuyamao, which means “the hairy one with the big feet.”

I started teaching eighth grade students in 1960. The various classes I was to have during the day would shuttle into my classroom for American history or English and on the first day, I would play Freberg’s History of the United States for them. It was the best class evaluation tool I ever found. Some classes snickered when Richard Rodgers, the songwriter, called on the telephone in the middle of the sale of Manhattan Island to a Dutch merchant. A telephone? Other classes listened right by that one, but would laugh at a reference to Leonardo da Vinci as “Lenny.” When we were done with that day, I knew pretty much what I had to work with that year in each class.

On Tuesday, James Ward said, in a comment about Freberg’s death. “I raised my family on Stan Freberg’s United States of America.” I had been thinking of using that as an opening line myself, but Ward got there first. It’s true for my kids, certainly. A reference to anyone who talks too much might be garnished with Benjamin Franklin’s dismissal of George Washington. “Oh yeah. That’s George for ya. Talks up a storm with those wooden teeth. Can’t shut him up. But when it comes time to put the name on the old parchment-o-rooney, try and find him.”

A thanksgiving feast seldom passes without the Puritan lament, “Whaddaya mean you cooked the turkey, Charlie?” Followed by, “And all of us had our mouths set for roast eagle with all the trimmings.”

It gets so bad in my family sometimes that different words entirely, if they have a characteristic intonation from a Freberg skit, will get the next line as a reply. A complaint about anything, if the tonality is just so, will get:

What are you so surly about today?

Surly to bed and surly to rise…

OK, let’s knock off the one line jokes and sign the petition, huh?

That little exchange is from “Tom Jefferson’s” attempt to get “Ben Franklin” to sign, “this little petition I’ve been circulating around the neighborhood.” The “little petition” is the Declaration of Independence, of course, from which Franklin reads, in apparent bafflement, the line…”life, liberty, and the purfuit of happineff?” 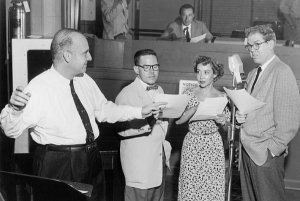 Because he was a parodist by temperament, Freberg parodied things. And the things he parodied were often things that irked him. He was no fan of what, today, we call “political correctness.” He does a wonderful skit with Daws Butler as Mr. Tweedlie. Tweedlie represents “the Citizen’s Radio Committee” and his job is to stop Freberg’s performance of “Old Man River” whenever he hears something the Committee might object to. By that process, we get lines like, “Elderly man river/That elderly man river/he must know something but the doesn’t say anything/ He just keeps rollin’…uh, rolling…he just keeps rolling along.”

In this picture, Freberg (right), June Foray (center), and Daws Butler (right) are recording “St. George and the Dragonet”  June Foray did a lot of work with Freberg, but my favorite line of hers opens the skit on the sale of Manhattan Island.  It is a loud lament with a “voice crying in the wilderness” tone to it.  “Too many moons we live here, White Cloud.  Time to unload this crummy island.”

Everybody knows what “that’s about the size of it” means. Unless, of course, it doesn’t. In an early Dragnet spoof, “St. George and the Dragonet” (Butler is the dragon) we get:

Dragon   I see you got one of those new .45 caliber swords.

St. George   That’s about the size of it.

One of the things Freberg didn’t like about the popular music of his day was the incessant repetitive piano background; what his fictional piano accompanist called “that clink clink clink jazz.” The pianist takes off on a lovely little jazz riff when Freberg, the singer, says, “Oh yes you will play that clink clink clink jazz or you won’t get paid tonight.” Then, after a pause of exactly the right length, the piano part starts up again. Clink, clink, clink.

He parodied the commercialization of Christmas in his wistful little “Green Chri$tma$.” He plays Mr. Scrooge, the head of the Advertising Council. Daws Butler plays Bob Cratchet, who “owns a little spice company in East Orange, New Jersey. The argument between the two is carried on in words and then in music with no possible confusion about what is being said. Scrooge wins. The last sound is a coin rolling around in the drawer of a cash register well after the last sound of a Christmas hymn has faded.

He was surely the kind of kid that always got in trouble in school. There are a lot of those, but not many of them take just that knack for trouble and turn it into decades of innovative comedy.