When you can’t go any further, you know where you are

I went to the University of Oregon to begin my doctoral work in 1970.  I knew that they didn’t give doctorates out for really good essays on what I did last summer vacation.  I knew it would require original scholarly work.  And I didn’t even know what I wanted to study.

I did know who I wanted to study with, however, and that worked our just as well.  James C. Davies had written Human Nature in Politics in 1963. It was a serious consideration of important political ideas from the standpoint of research in social psychology.  So I did two things in pursuit of my new doctoral field.  I applied to be a graduate teaching fellow in the department of political science.  They said No.  So I applied to be the morning janitor at the public library in Eugene.  They said Yes.

From the standpoint of the dissertation I eventually wrote—I called it Undimensional Man, having a little fun with Herbert Marcuse’s One Dimensional Man—both the No and the Yes were crucially important.  This is all hindsight, of course.  I really wanted the fellowship and, except for the money, I really didn’t want the janitorship, but you really can’t tell, at the time, what is a good outcome and what a bad outcome.

Just before I would open the library doors to the public at 7:00 a.m., I would dust the whole library floor.  As a part of that process, I dusted past the theology section—and every other section—and in the theology section, three shelves up from the floor, was one of the ugliest book jackets I have ever seen.  It looked like it was designed not to be mistaken for a deer in hunting season; it was orange (not green, like the example) and yellow and black.  I noticed that cover for a month before I ever stopped to see what it was.  It was Gordon D. Kaufman’s magnum opus, Systematic Theology: a Historicist Perspective.  “Huh,” I said, “So that’s what it is.  Ugly cover.”

A month later, I picked it up again and noticed that he said, “a Historicist Perspective” as he should, and not “an Historicist Perspective” as many do. Then I noticed that he was raised Mennonite, which is not a religious background I associate with Harvard Divinity School, where Kaufman was a professor, and which is similar in many ways to my father’s upbringing in the Brethren in Christ church.  Eventually, I took the book out; I did have a library card, after all.  I have read it maybe a dozen times by now.  The Gordon Kaufman of 1968—he has moved on from his 1968 positions but I still hold them—is my “go to” theologian.”

When I started getting sold on Gordon Kaufman, I started working my way through his other books and by 1972, I had found God the Problem, a book of his essays.  In one of the essays, “Transcendence without Mythology,” I found this passage.

Consider, for example, the situation of a man imprisoned in a cell outside of which he has never been and from which he cannot escape. If he seeks to conceive the restricting walls of his room—with their resistance to his efforts to push through them, their hardness and solidity and color—as (material) realities, he will be able to do so only in analogy with the experienceable (material) objects within the room. Thus, his conclusion that the walls are composed of some sort of thickness of material substance, however plausible, in fact presupposes an interpretation of that which is beyond what is directly experienceable by him, namely the bare surface of the walls. The conception of the ultimate limit of his movements is constructed imaginatively out of elements derived from objects within his experience that partially restrict and limit him; for the stuff or structure of the walls themselves—that “behind” their surfaces—cannot be directly known, though the restrictingness of the walls is, of course, directly experienced.

It was the picture that did it for me.  A man in a completely dark cell.  What he knows about 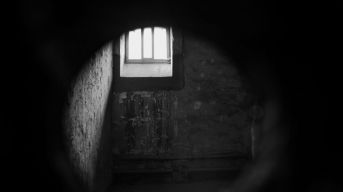 where he is can be determined by not being able to go any further.  He goes until he hits a wall and then he can’t go further.  By keeping track of where he is and moving in different directions, he can determine the size and shape of his “cell.”  He can learn the height of the cell and the makeup of the floor and what the inner surface of the walls is like.

And while I held that image in mind, I read a lot of anthropology and sociology and psychology and political theory and had conversations with a lot of really interesting professors and graduate students.  I began to notice that “what stops us from going where we want to go” is like the wall of a cell.  Skin color can be a wall; gender can be a wall; poverty can be a wall; being religious or irreligious or wrong-religious (depending on where you live) can be a wall.  And how do you find out that there are walls there?  By running into them and remembering where they are.

I was still thinking about walls when I read Amitai Etzioni on “inauthenticity” and how it is different from “alienation.”  The guy in the cell in Kaufman’s example is alienated as Etzioni sees him.  But look at this distinction: “The alienated man sees before him a tall unyielding wall; the man caught in an inauthentic situation feels entailed in a cobweb.”  You can find that on page 633 of Etzioni’s The Active Society or you can find it as the quotation introducing a paper Dave Campbell and I published last year, “Turning Cobwebs into Walls.”

When I read Etzioni on inauthenticity, I realized that you don’t really need walls to trap

people.  Cobwebs will do the trick if the people have given up on going anywhere or if they are confused about where to go or even if the notion of “going somewhere” has lost all meaning.

The short way to end this story is that when I saw that cobwebs could function as “walls”—and in Marcuse’s One-Dimensional Man, they do—I sat down and wrote my dissertation.  That wouldn’t be a fair account, but it wouldn’t really be false.  I needed to add some other pieces to that realization to bring me to inventing a “causal attribution journal” as a way to tell which were walls and which only cobwebs.

The work of devising the causal attribution journal has been on my mind since 1974.  I have been presented by my undergraduate classes with dozens of ways to misunderstand it which I would never have thought of.  And in all that, the image of the guy in the dark cell has continued to anchor all my speculation and all my teaching.  And I had forgotten about it until just last week.

2 Responses to When you can’t go any further, you know where you are