President Obama Doesn’t Get It

This essay is going to wander into some disreputable places, so let me start with the easy stuff.  First, I’ve been blogging for several years now and I have learned that “President Obama Doesn’t Get It” is a better headline than “The President and I see some important structural elements differently.”[1]

Second, these remarks which the President made on November 5 were a sort of pep talk.

To reporters assigned to cover the White House?  And who “score points” by asking the President, on TV, questions he can’t afford to answer?  Why would you give people like that a pep talk?  They are paid to be immune to pep talks.[2]

Third, the President has been saying these same things over and over since 2010.  They are diverging farther and farther from a credible and useful account.  I am not saying, of course, that the President is saying things that are factually untrue—and if he were, I wouldn’t care all that much.  The media circus now in operation would pounce on those mistakes like so much red meat in the lion’s cage.  But in these cases, it’s not really the facts that matter; it’s the premises.

I’m unhappy about the premises and they, unlike an errant fact now and then, really do matter.  I was really struck by a remark Noah Chomsky made as the Vietnam war was winding down.  “Now,” he said, “the real war starts.”

That’s the way I remember it.  A more sober version is captured in Question 1 and Answer 1 in this transcript.

The war he was referring to was the war that would be waged to establish once and for all what “the meaning of the war” was.  This is “the war” as it would go down in history books and as it would be learned by generations of schoolchildren and referred to casually, as something we all know, in speeches. 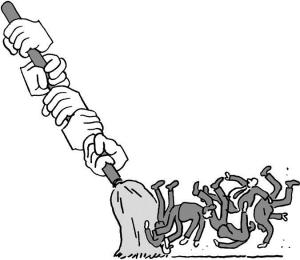 So let’s get to it.  We’re looking at the premises that underlie President Obama’s remarks and to which I take such great exception that I am willing to say that, as he is portrayed in these remarks, “he just doesn’t get it.”

What stands out to me, though, is that the American people sent a message, one that they’ve sent for several elections now.  They expect the people they elect to work as hard as they do.  They expect us to focus on their ambitions and not ours.  They want us to get the job done.

The American people elect us to work hard.  The premise there is that our elected politicians are not working hard enough.  No one I know who has seen the schedules that drive our elected representatives thinks that.  There are people, it is true, who seethe with a kind of populist anger and who think that “the politicians” have a sweet deal of some sort that that allows them to loaf around and collect inflated salaries.  That sentiment is a class antagonism.  It applies to everyone, public and private—except prominent entrepreneurs—who has a lot of money.   It is “them.”  That’s not what the President is talking about.

So if the premise is that people expect their elected leaders to “work hard” and that they are expressing their anger at the polls because those leaders are not working hard, I say that is wrong and I think the President knows it is wrong.  It isn’t the amount of effort that is being judged negatively.

We’ll just skip over “as hard as they do.”  This is a version of the casual and unthinking attribution of merit I first began to think about when an expensive hair product was advertised as worth paying for “because you’re worth it.”  The first time I saw that one, I thought, “What would anyone actually do to be worth an expensive hair product?”  And right after that, I thought, “I am so worth this that I get to pay for it?  Wow!”  But now everybody does it and I hardly notice.

Moving on.  The next false premise is in the next sentence: “They expect us to focus on their ambitions and not ours.”  There is a way that could be taken that would make it make sense, but that’s not what the President means.  It could mean that people expect their leaders to play it straight, to refuse to line their pockets with what used to be called “the spoils of victory”[3] and wind up rich at the public’s expense.  That’s not what it means here.  Here, it means that they want political leaders to enact the policies “the people” favor.

This functions as a quick reference to the fact that most of the Obama initiatives are supported by public majorities and yet, somehow, Congress doesn’t move on them.  How could that be?, President Obama pretends to wonder.  He does know, of course, that these same policies are vociferously opposed in many places and that it is the votes of the representatives that matter, not the preferences of the much-polled populace, and that the role of large donors in re-election campaigns is very large.  He does know all that.  Yet somehow “their priorities” are supposed to be credited as if this were a democracy (let’s see a show of hands) rather than the republic the Framers gave us.

All those same difficulties affect “get the job done” in the next sentence.  “Getting the job done” is the Holy Grail to the person who gets to set the agenda.  Having the right to say “No” or “Not yet” or “Not unless there are offsetting reductions” is the Holy Grail to people who have to work on someone else’s agenda.  President Obama knows that.

This country has made real progress since the crisis six years ago.  The fact is more Americans are working; unemployment has come down.  More Americans have health insurance.  Manufacturing has grown.  Our deficits have shrunk.  Our dependence on foreign oil is down, as are gas prices.  Our graduation rates are up.  Our businesses aren’t just creating jobs at the fastest pace since the 1990s, our economy is outpacing most of the world.  But we’ve just got to keep at it until every American feels the gains of a growing economy where it matters most, and that’s in their own lives.

That’s the way the President sees it.  Here’s how the Wall Street Journal sees it.

The median annual household income—the level at which half are above and half below—rose 0.3% in 2013, or a total of $180, to an inflation-adjusted $51,939, the Census Bureau’s latest snapshot of U.S. living standards showed Tuesday. The increase, which wasn’t statistically significant, leaves incomes around 8% below their level of 2007, when the recession officially started.

The government’s annual look at U.S. incomes helps explain why, despite a stock market that has returned to record highs, the economic recovery has been so unsatisfying for the broad swath of Americans who rely primarily on wages for income

President Obama knows all this and yet he says we need to “keep at it.”  In that phrasing, “it” refers principally to the Democratic initiatives that he says will be helpful.  “Keep at it” implies that persistence is going to help.  But if it is true, as I have argued elsewhere, that wages are low because of the collection of business practices that keep them low, then “keeping at it” means one thing for businesses (lower labor costs and higher profits) and another things for governments.

People are frustrated because their economy—not the economy—is not improving and there is no indication it is going to improve for their children.  According to a Rasmussen report, two thirds of Americans think the country is headed in the wrong direction.  If the direction is wrong, “keep on going” (the President’s proposal) is not going to be well received.  And, of course, it was not well received.  This shows the same thing in chart form.  If it is not all clear, the right hand table, showing income quartiles, should illustrate this point.

And the speech goes on from there.  Whatever the private Barack Obama knows, the President Obama who appears in public and talks to the press, clearly doesn’t get it.  And now he gets a Republican Congress to work with.  He’s going to invite them over to the White House and talk strategy with them.  That ought to do it.

[1] I’m not even sure that that statement is true.  It is entirely possible that, if I were to sit down with him to talk, just the two of us, and I pulled his November 5 remarks out of my pocket, that he would wave them away and say, “Oh…that.  Let me tell you what I really think.”  Maybe he would do that.  But I am working with what he said and pretending for the purposes of this thought experiment that he really thinks all those things.
[2] It isn’t that I don’t know the talk is televised, so lots of Obama supporters are watching the press corps grill their president.  I just don’t think it is good TV.
[3] That phrase is the origin of President Andrew Jackson’s “spoils system,” in which the party faithful were rewarded with jobs and contracts.  It is also the origin of Gov. Rob Blagojevich’s idea that appointing an interim senator “belonged to him” and he would sell it to the highest bidder.