A school stabbing. Everyone lived.

A student goes wild in a crowded school and attempts to kill as many of his fellow students as he can.  That’s not even an unusual story anymore.  Here’s what’s unusual: nobody died.  Not yet, at least.

So what’s going on?  Is the kid a bad shot?  Not really.  He was armed with two kitchen

knives and he was stabbing his fellow students, not shooting them.

Alex Hribal, the kid in Franklin High School in Murrysville, Pennsylvania who did all the damage with the knives, fits awkwardly into the NRA mantra about “people killing people.”  It is awkward because this incident changes the obvious question, the one that lies on the very surface of the debate, to: do people with guns hit more targets than people with knives?  The answer is: “Yes.  They do.”

This episode began about 7:15 a.m. EDT and ended about 7:20.  You can see a good account here. About five minutes.  In that time, Hribal stabbed 20 students and a security guard, before he was tackled by an assistant principal.  Imagine that he had had an AK 47.  They shoot, according an answer I got from asking the question on Google, “An automatic one approx 600rpm. A semi-auto variant as fast as you can pull the trigger.”[1]

The debate about the regulation of firearms in the U. S. is as complicated as you would like to make it.  The Supreme Court has debated for decades now about the relationship between the “well-regulated militia” clause and the “right to bear arms” clause.  On the Court, no one has changed anyone’s mind for a long time. 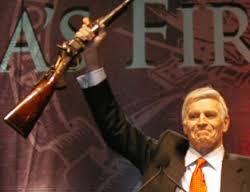 You can argue about whether we would be better off if everyone had guns or if no one had guns.  The position of the NRA is that we will never achieve a condition where no one has a gun and the next best position is for everyone to have one.  We don’t need fewer guns, we need “more good people with guns.”  This has the virtue, as the NRA sees it, of changing the discussion from  a policy outcomes question–what effects will a society awash in weapons experience ?—to a moral question.  The moral question is how we can be sure that more of the people who have guns are good guys.  Apparently, the NRA feels that shots taken by good guys don’t hit bystanders by accident.

You can argue about what means the government can take to reduce the chance that a mentally ill person has ready access to automatic weapons.  Are “background checks” really going to do much?  Would proximity triggers help, a gun that would fire only when in the hands of the registered owner?  Would control of bullets (the Constitution is silent about bullets) be a better strategy?

You can’t argue that if Alex Hribal had had two semiautomatic pistols instead of two kitchen knives, he would have done less damage.  You can’t argue that.  Many people in Murrysville are alive today because Hribal had knives instead of guns.  Even the adaptation of the NRA slogans—“knives don’t kill people, people kill people” or “what we need is more good people with knives”—are patently nonsensical in the light of this event.

The “people kill people” dodge has always been offensive to me as someone who aspires to constructive public argument, but today, it just seems silly.

[1] This answer is two years old and came from a person whose on-screen name is “Fatefinger.”  I’ll take it as close enough for my purposes and, so far as I know, it might be exactly correct.  I saw a range of 400 rounds per minute to 600 rounds per minute (rpm).