This is the third of five posts.  I covered the Court’s opportunity to deal with campaign reform the day before yesterday; yesterday it was abortion; today it is affirmative action.  All five issues and the associated cases are drawn from this article by Adam 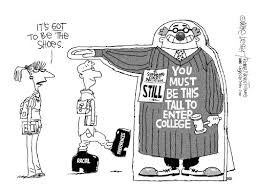 Liptak in the New York Times.

If we are going to talk about political ideology and court decisions, we need to remember that principles are not cases.  I can say I am a liberal (I am) and look at the likely implications of that position, but when a particular case comes up, some difficulties can come up with it.  It may not be clear just what a liberal ought to want from the Court in an affirmative action case.  Do the proper resolution of the case and the reaffirmation of my political ideology always point in the same direction?  Alas, they don’t always; then I have to choose between them.

The questions that are applicable to all these cases are these: a) being a liberal, what social and political outcome do I expect to want; b) as I read the case, what decision seems fair and reasonable to me; and c) do my preferences for this case and my political position fit nicely together?  Might I, for instance, have to question my liberalism on the basis of this case?

This is a family sort of game.  You are all invited to play along.  Pick the ideological name 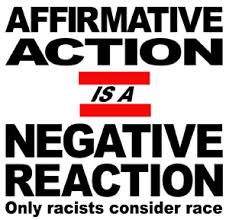 you apply to yourself, read the case on www.oyez.com and choose what action you want the Court to take, and then reflect on your ideology in the light of your decision.

For me, the answer to the first question has to be ambiguous.  So what is “affirmative action?”  First, it is a euphemism.  Nothing wrong with that.  Second, it means “don’t just stop discriminating against racial and ethnic minorities,” but rather take positive steps to favor those minorities.  President Kennedy’s language in Executive Order 10925 (1961) says both that government employers “not discriminate against any employee…because of race, creed, color, or national origin,” but also that government employers should “take affirmative action to ensure” that they employed and treated without such regard.

And then there is this: how will you know when you are done?  Is “affirmative action” forever?  Is it until some balance in employment and admissions questions is reached?  If we are waiting for “balance,” have we specified a quota system of some sort? 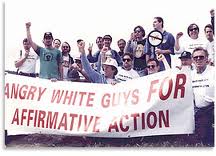 And then there is this: is admission to a university by affirmative action going to tar you for the rest of your life.  Is it like being hired because you are related to the boss?  Even if you show yourself to be worthy by your own good work, will you ever be judged just on your own work or will the conditions of your admission or your employment always be held against you?[1]

So with all my initial ambivalence as a liberal, what about the case itself?  This is Schuette v. Coalition to Defend Affirmative Action.  Here is what Oyez.com has to say about it.

Facts of the Case

In November 2006 election, a majority of Michigan voters supported a proposition to amend the state constitution to prohibit “all sex- and race-based preferences in public education, public employment, and public contracting.” The day after the proposition passed, a collection of interest groups and individuals formed the Coalition to Defend Affirmative Action, Integration and Immigration Rights and Fight for Equality by Any Means Necessary (Coalition). The Coalition sued the governor and the regents and boards of trustees of three state universities in district court by arguing that the proposition as it related to public education violated the Equal Protection Clause.

Does an amendment to a state’s constitution to prohibit race- and sex-based discrimination and preferential treatment in public university admission decisions violate the Equal Protection Clause of the Fourteenth Amendment?

Answer: well, kind of.  If the equal protection clause requires affirmative action or if it 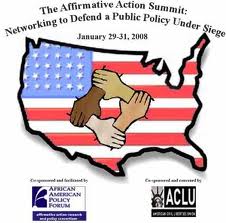 allows affirmative action, then the voters of Michigan should not be allowed to annul it because of their local preferences.  That’s just nullification, a very popular pre-Civil War response in the South.  But the Court has been squeezing down harder and harder on just how a goal should be defined (quotas are bad) and what purposes justify involvement by the federal government (“racial balance” is bad, but “diversity” is good).

So what does this do to my liberalism?  It puts a dent in it.  I’m not sure I know any white liberals who have deep misgivings about affirmative action.  This is one of those questions where the society really ought to solve it by not being racist (or sexist or any of the other –ists).  That’s the only really good solution.  But if society doesn’t solve it and people call on government to solve it, it is going to be clunky and expensive and confusing.  That’s what it is now.

[1] You might, in that regard, want to consult Stephen Carter’s Reflections of an Affirmative Action Baby.  Carter describes himself as both a “beneficiary” and a “victim” of affirmative action.