“The unexamined life is not worth living,” said Socrates.  I don’t think I would go q

uite that far, myself.  I do think I would say that in most cases, the properly examined life is “better” than the alternatives.

This comes to mind because I am stuck between Part I and Part II of Bonnie Klein’s (the veteran high school English teacher) recollections of herself as Bonnie Zawacki (the late teenage college student).  At the end of “Remembering Bonnie Zawacki—Part I,” I promised dark things in the next post, but the most interesting of those dark things is Bonnie Zawacki’s complaint that I taught them how to lower the threshold of perception (as that threshold controlled certain questions) but I didn’t tell them what to do with all that new data.  In that, she was completely correct.

I have some things to say in my defense—in my defense against Bonnie Zawacki’s charge; remember that Bonnie Klein and I see this issue in precisely the same way by now—but before I say them, we are going to have to take on Socrates’ notion of what is worth living and what is not.  Ludwig Wittgenstein has another idea entirely in mind, as you see, but he is going to have

to wait his turn.

Let’s begin with the contrast Socrates draws between “examined” and “unexamined.”  This is a light switch sort of contrast; either you “examine” your life or you don’t.  I like the principle because it does away with “unexamined” as a value.[1]  It does not, unfortunately, distinguish between “overexamined” and “underexamined.”  It also does not distinguish between “well-examined” and “poorly examined.”  We could call those, respectively, the amount of examination (too much/too little) and the quality of examination (high quality/low quality).  When I asked for the “properly examined life” in the first paragraph, these dimensions are what I had in mind.

Socrates didn’t say that the maximally examined life was better than the optimally examined life.  At least he didn’t say it in this quote.  My wife, Bette, was introduced to my family in the summer of 2005.  I was 67 years old at the time and I felt that introducing a brand new wife to a collection of people who have known you all their lives is potentially perilous.  Bette won the hearts and minds of my family with one line, “Sometimes Dale…well…you know…he over-processes things.”

I deny it.  I say that I am the kind of person who really needs to process things—how do I think, how do I feel, what causes what, who is responsible—more than most people do.  More to the point of today’s story, however, is that I was also the kind of teacher who wanted people to process things more than they had, up until then.  Maybe I thought that if it was good for me, it must be good for them.  However it started, it was unquestionably sustained by the several generations of students who said, “This is the most valuable thing I ever learned,” or sometimes, “Wow!  This is soooo cool.”

I don’t want to waste a paragraph on under-processing.  In collectivist societies, the group does a lot of the processing and individuals don’t need to.  In individualist societies, like ours, individuals need to do more of this “examining of their lives” for themselves; even so, some need it more than others.  I’ll just say that if you can overdo it, you can underdo it.  That takes care of the amount of examination.

Most of us live lives where we order off the menu.  We don’t start with the universe of things we would like to eat and then judge the menu by the proportion of that universe it includes.  We look at the menu and decide which, of the things on the menu, we would like to eat and order that.  The menu us just a metaphor.  I think nearly everyone lives a menu-driven life.  The Goths that hang around our high schools, for instance, have a menu of ways of dramatizing their disdain for convention and they choose off of that menu what they will do on any given day.  Even the Goths don’t start from scratch.

Focusing on the menu is a way of ignoring other things and, in some circumstances, “other things” really should not be ignored.  Leading a well-examined life is a way of probing, from time to time, for things that we would like to have on the menu.  Part of my work in Political Behavior, at Westminster College, was to ask off-the-menu questions.  Let’s consider Albert.

Did you ever wonder what a high school student meant when he said, “Fine.”  “Hi, Albert.  It’s good to see you home so early.  How was school today?”  Albert thinks for a moment and then says, “Fine,” and leaves the room.  He might mean just that he doesn’t want to talk about it.  On the other hand, in that moment when he paused, he might have run through all the things that happened, looking for something unusual; something that could be singled out and given as an answer to the question. 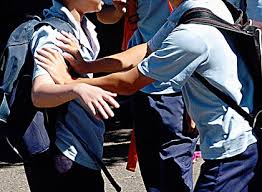 So let me invent a school day for Albert.  Some of the guys in his class pushed him around a little as he was going to his first period class.  It was just recreational pushing; nothing serious.  It’s what they do more often than not.  Spanish class was awful.  Most of the kids haven’t done the assignment and Ms. Gonzalez has to spend a lot of time complaining about it and then a lot more time doing their homework for them orally in class.  That’s mostly what happens in Spanish.  Lunch was routinely awful: greasy chicken and gravy and deep-fried tater tots.  Albert sat at a table by himself and pretended he was reading a book; he had found it more likely that he would stay out of trouble if people thought he was reading.

That’s pretty much what happens when Albert goes to school.  It is those things that he means when he says, “Fine,” meaning that nothing so unusual has happened that it ought to be singled out.  The events of Albert’s day came right off the menu.  He managed that day’s menu of events as well as he could and that’s the end of that.

understand the day.  To understand the day, Albert is going to have to allow himself to become aware of some things that aren’t on the menu.  What would happen, for instance, if he was met at school by people who were glad to see him?  How would it be if Spanish class were not so awful?  What if there were good things to eat at lunch and pleasant interesting people to sit with for lunch?

Asking those questions moves the threshold of awareness down.  It allows information and values and hopes and fears to come across the threshold and into your life and onto the pages of your journal.  If you had a journal that was organized around what you were trying to do—that’s the kind of journal the causal attribution journal (CAJ) is—then you could get out of the menu.  You could say what you wanted to happen and what you were trying to do as you entered school and in Spanish class and at lunch and you could see that those things you wanted were not happening.

That’s the kind of thing “the examined life” brings to you if you do these two things: a) organize the examination around what you are trying to do and b) expand the menu beyond “how it always is” to “how it could be.”  If you are recording failed initiatives in your CAJ—and that’s what it’s for—you now have a series of entries that begin (negatively) with “Wanted to go into school without being pushed around” or (positively) with “Wanted to meet people as I come to school who are glad to see me.”  Eventually this series gets a category name, either a negative one which will have “bullies” in the title or a positive one that will have “friends” in the title.

There are lots of possible outcomes and some of them are not good.  And those are the “dark things” that Bonnie Zawacki had in mind.  We’ll take a look at them next.

[1] Members of collective societies—not individualistic ones like ours and like Socrates’—might feel that it is “our life” not “my life” that needs to be examined and that there is some collective rationality that will do it.  Maybe “the traditions of the elders” provide the kind of examination of our life that is needed.