I am beginning today a set of thought experiments bearing on the notion of “unconditional” or “non-contingent” love.  I am beginning with the position that it is a bad idea.  It asks more discernment of us than we can reliably muster.  It misdirects our attention from effects to motives.  It renders unavailable questions that are really useful, most of the time.  It sometimes draws on a theological tradition (Christian, in this case) that I think gives uncertain support to it.

I’m not writing this post because I am looking for new friends, you will note.  I just hope I can keep most of the friends I already have.

Let’s start with the fall 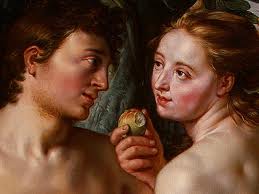 of “man.”[1]  God put Adam and Eve in a beautiful garden where they could be happy ever after if they chose.  There were two conditions.  The first is that they were mortal.  I infer that from the existence of a “tree of life” the effect of which would be that Adam and Eve would live forever.  The second is that the range of their responses to God would be a) obeying and b) disobeying.  I infer this from the existence of the much better known “tree of the knowledge of good and evil,” or as I sometimes call it, “the tree of moral autonomy.”  Adam and Eve violated the second condition—they ate “the apple”—and were escorted hastily from the garden lest they violate the first condition.[2]

The serpent’s pitch to Eve was that God was worried about His creation becoming equal with the Creator and that is why He forbade the fruit of the tree of the knowledge of good and evil.  If you eat from the tree, said the serpent, you will be as gods, knowing good from evil.  That must have sounded pretty attractive to Eve.  She was going to sit at the big table with the grown-ups.

There were a few things the serpent didn’t mention, however.  Isn’t that how it goes?  God can get away with “knowing good from evil” because He is…well…God.  God is omniscient, which is nice if you are going to create a world and run it competently, and God is completely and reliably benign, according to the mainstream beliefs of both Jewish and Christian theologians.  God, in other words, loves completely and competently.  It is safe to have Him at the big table with the grown-ups.  It is, after all, His table.

Is it safe to have Adam and Eve there?  Not really.  They overestimated their abilities when they took on the burden of moral autonomy.  They could manage obedience.  Mostly.  And, as I read the story, they could manage occasional disobedience as well, because there was a way to be reconciled.  But moral autonomy is a whole new basis for deciding what is good and what is evil.  It is an intramural basis.  It doesn’t reach outside the walls, where God is.  It says, “We can make that decision perfectly well on our own, thank you very much for your concern.”

Unfortunately, you have to be completely loving and really really smart to be trusted with moral autonomy.  God meets those criteria quite well, but Adam and Eve do not.  They really don’t have the stuff to manage that level of understanding and caring and acting.  Nor do they, do “we,” have the stuff for unconditional love.  To be trusted with a mandate like that, we would have to be “like gods.”  Does that requirement sound at all familiar?  We would have to more perceptive and more caring and more strategic than we are really capable of being.

If the hubris that lead us into the Fall and the hubris that leads us to accept “unconditional love” as a standard for our behavior sound similar to you and if that similarity makes you a little uneasy, then this post has reached the place where in marathons, you stop for a drink.

[1] I learned recently from an old lecture by Raymond E. Brown, the Catholic biblical scholar, that in the early tradition “Adam” was not the name of the man and “Eve” the name of the woman.  “Adam” represented “mankind.”  The idea that mankind came in separate gendered flavors was a later idea.

[2]Genesis 1—3 covers all the narrative.  The notion of “moral autonomy” I ran across first in the writings of the late Gordon Kaufman, a Mennonite theologian at Harvard.  What are the chances of that?