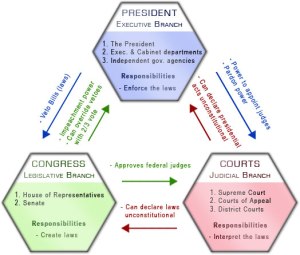 The government of the United States was built to be a balancing act.  Just what elements of this mechanism are supposed to be “in balance” have changed from one time to another.  Early ideas were that the largest states were to be balanced against the smallest.  That’s why we still have an Electoral College.  Then there was the idea that the elites should be balanced against the people.  Madison’s vision of that is quite vivid.  Then, after the rise of mass-based political parties and universal suffrage, the idea was that “balance” could be achieved by dividing the government between the major political parties.

It isn’t ridiculous.  The logic is the same as requiring ⅔ of the House and Senate to override a presidential veto.  If it is so good an idea that extraordinary majorities can be mustered for it, then the President should not be allowed to forbid it. [1]  In the same way, each party could theoretically dominate the national government so it could do extreme things, so  that putting the Congress in the charge of one party and the Executive in the charge of the other is just a prudent measure.  And if, as in the case of the veto, they feel something is so important that they can devise an extraordinary majority, then they can still act.

As I write this, there is speculation that the voters of Georgia might vote Republican in the Senate elections on the grounds that the House and the Presidency are already in Democratic hands and wouldn’t it be safer to make sure that they can’t do everything they would like?

That argument, which has not been ridiculous over the years of our republic, is ridiculous now.  What they call “divided control” of Congress—Ds in one house, Rs in the other—is, in our time a guarantee that there will be no action at all.  Increasingly, over the last thirty years, the goal of each party has been to frustrate the will of the other.  We don’t have “bipartisan cooperation” any more, so that if a policy is a good idea, some members of one party and some members of the other party will get together and pass legislation.

Just to get a picture of how far we now are from that long-honored ideal, try to imagine that the 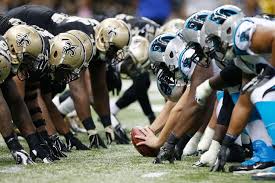 offensive and defensive lines in a football game were to decide on just what yard line the football should be and then, cooperatively put it there.  That’s not how it is done in football and no longer done in government.  If you want the ball to be further that way than it is—you will call it “advancing the ball” probably—then I want it not to be there.  In fact, I want it to be further in the other direction.  The war of offensive and defensive lines is not a policy dispute.  No one ever thought it was.  But neither is proposed legislation a policy dispute and there was a time when it was.

If the Democrats do not win the two Senate seats in Georgia today, they will be handing Mitch McConnell the means and the opportunity to forbid any legislation at all.  He already has the motive.

So the question about “divided government” today is just this.  Do you want the government to be capable of passing legislation?  Just that. [2]  The Republican stamp on a bill in enough to kill it in the House; the Democratic stamp is enough to kill it in the Senate.  The alternative is the systematic abuse of the Executive Order by presidents who know better, but who have no alternative.

Will the country be governable this year?  That is the question in today’s elections in Georgia.

[2]  It is possible that a band of liberal Republicans and conservative Democrats could agree to vote together and run the whole Senate.  It would take four of them to do it.  It hasn’t ever been done at the national level, but it was done in Oregon some years ago.  Observers were amazed.