“Give me a break”

Trump’s recent phone call to Georgia is iconic.  It puts on display nearly all the things that are most characteristic of Trump [1] and most dangerous to democracy.

Here is the account of the call as it appears in the New York Times.  As this call shows, Trump has no notion at all that Secretary of State Raffensperger is an elected official doing the job he was elected to do.  “Give me a break” is a request that Raffensperger change the votes as reported (and verified) so that they are different from the votes actually cast.  It is the logic by which one might ask a bank for a better deal on a loan.  There is, in this request, no awareness at all that Raffensperger has done all he can legally do and is satisfied that the job has been done fairly.

But “give me a break” isn’t the only sin this recording preserves although it might be the only crime.  Here is what I would call another sin: he generalizes inappropriately from his own experience.  Heather Cox Richardson [2] puts it this way:

He insisted that there was simply no way he could have lost in Georgia, and cited the size of his rallies there as proof. 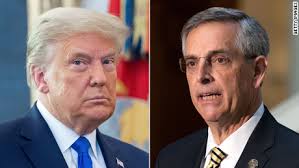 and Trump cites their numbers as proof that he really won the election.  It almost seems as if he doesn’t understand that there are other rallies that other people attend and direct their enthusiasm in other directions.

Trump cites the rumor that they are shredding ballots in Fulton County.  Secretary Raffensperger responds: “Mr. President, the problem you have with social media, they — people can say anything.”

Raffensperger is guessing that is where Trump has encountered the rumors.  His willingness to speculate that there is a source—any source at all—is an act of generosity, but it is wasted.  Trump responds:

Finally, there is the exchange with, Ryan Germany, a lawyer for the Georgia Secretary of State’s office, who is also on the call.  Germany knows what has happened and is not willing to spin it.  That part of the conversation looks like this:

TRUMP: Now, do you think it’s possible that they shredded ballots in Fulton County? Because that’s what the rumor is. And also that Dominion took out machines. That Dominion is really moving fast to get rid of their, uh, machinery.

RYAN GERMANY,(lawyer for Georgia secretary of state’s office): This is Ryan Germany. No, Dominion has not moved any machinery out of Fulton County.

TRUMP: But have they moved the inner parts of the machines and replaced them with other parts?

I think it is the brevity of Germany’s answers that appeals to me.  He is confronted by wheedling, by bullying, by allegations of crime, by “data” that are just asserted.  Germany says, “No”

I want to give the last line of this encounter to Secretary Raffensperger.  “Well, Mr. President,” he says, “the challenge that you have is the data you have is wrong.”

[1]  I have been rigorously careful to refer the Mr. Trump as President Trump.  The call to Secretary of State Raffensperger (Georgia) was one step too far for me.  It’s just “Trump” from now on.