I wanna be a hero

I don’t know how it is with girls, but there is a persistent attraction among adolescent boys toward “heroism.” It can take really ugly forms as well as really attractive ones. I think there is nothing good or bad about being drawn toward heroism as such. I think there are good heroisms and bad heroisms.

I got to thinking about this because of a column by Joanna Schroeder in the New York Times from Sunday, October 13. The author was concerned about the attractiveness of the far right in online settings and its appeal to “heroism.” 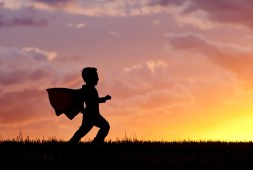 Ms. Schroeder is concerned about the vulnerability of white males, her sons in particular, to the extremist appeals that are available online. Certainly she should be and so should we all. But I would like to take her column as a starting place and to think about just what we have on hand to oppose it.

The ideal, it seems to me would be to oppose “our kind of heroism” to “their kind of heroism.” It just might be, I am afraid, that we don’t have one of our kind. What we are asking our adolescent boys to do is to forego heroism entirely,. That doesn’t sound like a good idea to me.

Thus example from the column illustrates some key dimensions of the problem.

The next red flag: I watched my son scroll through Instagram and double-click on an image, lighting up a heart that signifies a “like.”
“Hold on a minute,” I said, snatching his phone. “Was that Hitler?”

The meme showed a man in contemporary clothing tipping off the Nazi leader to the invasion of Normandy. My son said he hadn’t even read it, he’d just assumed the time traveler was trying to kill Hitler, not help him. He was shocked and embarrassed when I pointed out the actual message: that it would have been better if the Holocaust had continued.

“I’m not stupid enough to like a Hitler meme on purpose, Mom,” he said. “And anyway, I’m sure my friend shared it to be ironic.”

Once again, Ms. Schroeder is writing about parenting and I am writing about heroism. But before we get there, let’s look at the kind of attention the mother and the son paid to this online clip. [1] When he saw someone in modern dress talking to Hitler, he assumed it had to do with opposing Hitler in some way. Why else would his friend have put it online and if it came from a friend, what is wrong with “liking” it:?

This changes the focus from whose communication this is—a question of “belonging” to “what it says,” a question of meaning. And not just meaning in some immediate and concrete sense, but “meaning” in the sense that Hitler connects to Holocaust which connects with a friend who has a death camp tattoo on her arm. The son is a lot more interested in belonging and that means “liking” a lot of things, too many, really, to have to read them carefully. [2]

So there is a dimension of this little episode that raises the question of how one reads (carefully and analytically, or casually and informally) and whether meaning or solidarity is more important.  That isn’t what Ms. Schroeder is writing about, but I think they are essential elements of the dilemma.

So what does Ms. Schroeder have in mind for her sons? What are her goals for them? One of the kids used the term “snowflake” (easily offended) and she responded this way:

Who is more of a delicate snowflake? The person who wants people to stop racial slurs or mocking of gay people or the person who is upset and offended by the use of the phrase “Happy Holidays?”

She wants to say that good behavior is more in line with stopping racial slurs or mocking gay people than it is in line with being easily offended by the substitution of “holidays” for “Christmas.” And she is right. That’s what good character calls for. What does heroism call for? Fox News says there is “a war on Christmas.” Fighting a war to save a cherished American institution could be called heroism if you pushed it hard enough. Refusing to mock gay people could not be called heroic no matter how hard you tried.

Or consider this one:

But of course, it’s not just that we want to prevent our sons from becoming perpetrators of mass shootings. We want to raise them to be the kind of men who would never march with the neo-Nazis …we want to keep them from becoming supporters of the racism, anti-Semitism, Islamophobia and gender- or sexuality-based hatred that is on the rise.

This way of dealing with the kids’ yearning for heroism is to stop them from being supporters of bad causes. Not neo-Nazis, not racists, not anti-Semites, not Islamophobes, etc. But there is nothing heroic in simply not being a supporter of bad causes. If you are hungry and thirsty for heroism, this list of “not doing things” will leave you as hungry and thirsty as you were at the beginning.

I really think there is not choice but action against the odds. Do a brave thing; a daring thing. Do it in the company of people who will call themselves your sisters and brothers and be willing to go down in flames. That’s an adolescent notion of heroism.

It is hard for a stable liberal democracy to produce such causes. Hating the “other” even

if you are no supposed to could be construed as heroic. Affirming all people despite their differences probably cannot be called “heroic” no matter how hard you try.

I think the message implicit in Ms. Schroeder’s column is that guiding teenage sons to generous and affirming behavior when their friends are out there testing the limits is going to be a tough sell. Telling adolescent boys to forego their hopes of being heroes is going to be a tough sell also. The extremists will aways have better access to the hopeless hero status, but I think we could do better than we are doing.

[1] Calling this a “meme” stretches the word out of any useful range of meanings, it seems to me.
[2] I am familiar with the problem. To get from one screen to another, I have to say that I have read (I have not) and agree to (what are my options, really?) the massive block of legal language it offers.