Policymaking in a democracy

What will happen to the great coastal cities if the atmosphere continues to warm at the rate it is warming now?

I think that is an interesting question.

Even more interesting would be pictures—these would look like photographs, but would, in fact, be visual constructions based on the predictions of scientists—of Amsterdam, Bremen, Miami, and New York under each of the scenarios pictured below.

I got this from a Vox.com piece by Umair Irfan.  You can see it (and a hyperlink to the whole report) by going to Vox.com and searching for [global warming].

This chart does not move anyone to action.  The numbers ought to be alarming, but they are not.  Most people don’t know how to be alarmed by numbers.  I am thinking, though, that the picture of “my home town” flooded up to the fifth floor of the city’s largest department store, just might cause alarm.

It seems to me that we have wasted a lot of time arguing about the scientific basis of climate change.  We—environmentally aware citizens and knowledgeable scientists—have wanted our opponents to recant.  They aren’t going to recant and we aren’t going to be able to make them.  They have their own reasons for saying what they are saying.

We have proposed one policy after another to deal with the things we are doing that cause the atmosphere to heat up and the oceans to rise.  The great defect of these proposals is that they will take a long time to have an effect and the economic reasons for opposing them are urgent and immediate.  So the policies are opposed, successfully, so far.  People who live in “coal states” or “oil states” are not going to accept the radical rise in the costs of those fuels that would come if we priced them by the damage they are doing.

So trying to get consent to policies has been difficult.

I wonder if it might not be better to try outcomes, rather than policies. 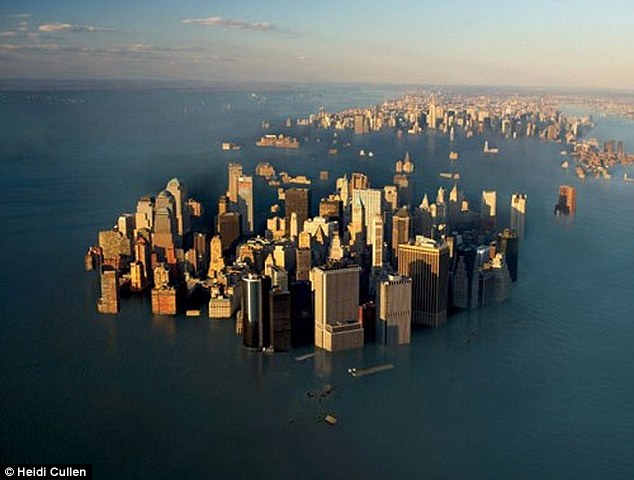 Here is your city, we would say, in each of the four proposed scenarios.  Here is a sample of New York  We are asking you to choose the picture you like best.  When you have done that, I will tell you what policies—these are worldwide policies, of course, not use U. S policies—belong with each of the pictures.

At that point, assuming that you are still willing to believe in democracy—a belief that doesn’t fare well, frankly, in difficult times—we can tell you who to vote for in order to get these policies.  These policies will require that people who are still making money by polluting the atmosphere be forced to stop, at whatever cost to themselves.

Or, failing that, you could consent to some form of dictatorship—it would be called “temporary” at first—for the purpose of imposing measures on both individual citizens and corporate citizens, some of which the Constitution expressly forbids.  That, of course, is why you would need a dictator if electing people committed to restoring a livable climate turned out to be insufficient.

After all, no one sells toothpaste anymore.  They sell smiles.  Outcomes.  Maybe the closest we can come to an “outcome” is the pictures of your home town under any of these scenarios.

Here are your choices, we would say.  Pick one.