There is no Starbucks in Mr. Rogers’ Neighborhood. Sigh.

Bette and I went to see Won’t You Be My Neighbor yesterday, as good a way to begin a July as I could think of.  I knew I needed to see it, but I was hesitant, too, because Mr. Rogers’ neighborhood isn’t anywhere I would like to live.

There is, for one thing, no Starbucks there and while I hope you appreciate the humor in that, I also mean it is a serious way.  I have serious reservations about the way Fred Rogers imagines what children need and there is nowhere in the Neighborhood to raise such questions.  That is what the Starbucks would be for.

About Mr. Rogers himself, I have no such reservations.  I am quite sure I would like him. 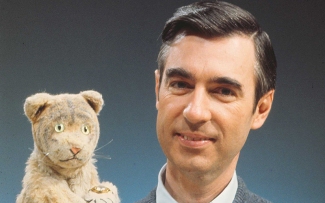 I’m pretty sure I wouldn’t venerate him and I think he would be fine with that.  The film is rich with veneration of Mr. Rogers, but none of it seems to stick to him and quite a few of the richest appreciations of him shown in the movie were posthumous.

I’m going to pass along, below, a few of the things I liked best about the movie, but what really saved it for me was the clear sense that if I had known him and had proposed that we head off to Starbucks to talk about Baumrind’s work on what children need to thrive, he would have thought it was a good idea and we would have had that conversation.  It is that sense that saved the movie for me and allowed me to enjoy all the other things that are there to savor.

The ear fell off

I think a very early exchange in the movie will serve as a good example.  A little kid—his name was Daniel, as I recall— tells Mr. Rogers that his pet had lost an ear in the washing machine.  Mr. Rogers says, “That happens sometimes.”  Then he goes to the heart of the matter—how he knew it was the heart of the matter I have no idea—which is Daniel’s concern that his own ear, or his hand or his leg might fall off, too.  Mr. Rogers says they won’t and leads the kid through a list of appendages that won’t fall off.  Problem solved for the moment.

Fred Rogers is famous for saying that emotions are mentionable and controllable, but in this instance, there was no mentioning at all.  There was just the damaged pet.  But Rogers knew what the emotion was anyway.  I saw the film of the conversation.  I had no idea what the kid was upset about.  I might very well have offered to buy him a new toy because I so misunderstood the real issue.  Rogers didn’t.  He went to it without so much as a skipped beat.

Rogers was given a chance to testify before Sen. John Pastore’s committee.  The Nixon 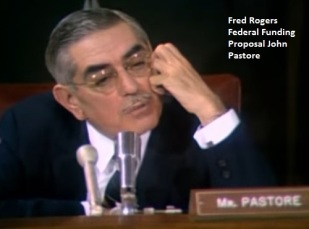 administration budget had in mind cutting funding for the Public Broadcasting System, which would have included Mr. Rogers’ Neighborhood,  and that what the issue was when Mr. Rogers sat down at the witness table to give testimony to Sen. Pastore, a notably irritable and plain-spoken chairman.

Take a minute and remember what the political climate of 1969 was like.  Remember the riots of 1968 and the controversial election of Richard Nixon.  Mr. Rogers asked if the committee would like to hear the lyrics to a song he often used on the show.  Neither Pastore nor I had ever heard it.  It goes like this.

What do you do with the mad that you feel? When you feel so mad you could bite. When the whole wide world seems oh so wrong, and nothing you do seems very right. What do you do? Do you punch a bag? Do you pound some clay or some dough? Do you round up friends for a game of tag or see how fast you go? It’s great to be able to stop when you’ve planned the thing that’s wrong. And be able to do something else instead ― and think this song ―

And he recited the whole thing. You can see how long it is.  It didn’t feel long as I watched him recite it.  Given the OK Corral context of the scene, I think I understand how the suspense carried me along.

“I’m supposed to be a pretty tough guy, and this is the first time I’ve had goose bumps for the last two days,” he said. “Looks like you just earned the $20 million.”

“The twenty million” is a reference to the entire budget allocation for NPR, which was the issue before the committee.  Rogers seems a simple, even a naive man, in the committee setting, but he was right on the money with Sen. Pastore, just as he was with Daniel.

There is a longer version of the story in John 13, but The Reverend Mr. Fred Rogers, ordained minister in the Presbyterian Church, very likely knew what his adult viewers would be reminded of, consciously or not. [1]

This was a time when swimming pools were “being integrated,” that is, black kids were allowed to swim in the public pools along with white kids.  The movie shows film of a pool manager dumping chemicals into the pool in an attempt to clear the black kids out.  I had never seen that footage and the context to what was going on in the Neighborhood was stark. 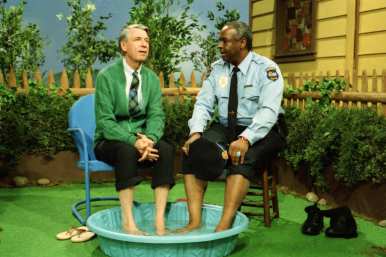 Rogers invited the local cop, a black man, to take off his shoes and socks and cool his feet in the little wading pool you see here.  Feet.  Hot.  Cool water.  Sharing towel.  Easy camaraderie.  Nothing in what you see on the screen feels like public policy.  It doesn’t feel like protest.  It seems like something neighbors might do on a hot day.

Those three episodes are enough, I think, to suggest what the movie has to offer.  Alissa Wilkinson, in a vox.com review of the film said that “it feels radically subversive.”  I didn’t like that observation before I saw the movie and I am still not sure I agree with it, but now I know what she meant.  You do come out of the movie feeling that you have been living in a different place, a place dominated by different values.  It gives you a chance to wonder, again, whether we are really doing the right thing.

As winning as Fred Rogers is in the variety of settings in which we see him, I never quite shook the “yes, but” feeling I got when he tried to explain his more general approach to children.  There were no standards in his approach, no limits, no achievements. [2]

My brother, Karl, was a pediatrician for many years and in that capacity, he saw a lot of different parenting styles.  I have often heard him say that amid all the superficial variety of these styles, every one that had firm clear standards and warm nurturing support, worked just fine.  Present parents, clear standards, warm support.  I took for granted that he knew what he was talking about and that is the standard I aimed at in raising my own kids.  I didn’t see any of that in the Neighborhood.

The role of “control” in those styles of parenting is to make it possible for children to respect themselves.  Every study I have ever seen of the topic shows that the U. S. leads the world in “self-esteem.”  We think we are wonderful. [4]  But we don’t think we are good at things because to be good at things, you have to master the requisite skills and to master them, you have to fail so you can correct whatever you did wrong.  The trying and failing and mastery and consequent “self-respect” require the clear standards that seem to be missing in the neighborhood.

“Self-respect” was not the issue Mr. Rogers was trying to address.  That’s why I have no quarrel at all with his wonderfully therapeutic touch with children and adults, and even, when necessary, with Senators.  But when that project is blown up into a way of understanding “what children need,” I start to squirm because what I needed was a way to respect my own efforts and, eventually, myself.  And I think that’s what a lot of kids need.

And if there were only a Starbucks in the neighborhood, Fred and I could go there and work it out.  And I am sure we would.  I like him a great deal. [5]

[1]  In a similar manner, FDR used to refer to his wealthy opponents as “malefactors of great wealth,” trusting that the only other context in which his listeners would have heard the word “malefactors” was in the King James Version of the crucifixion of Jesus and that it referred to the criminals who were being crucified at the same time.  Sometimes just placing a word in a context is all that is needed.

[2]  Bette says they were really there.  It is just that they were not shown in the movie.  I don’t know how she knows things like that but I know not to bet against her.

[3]  Baumrind has since expanded the typology by allowing mid-range values for the scales, not just high and low.  Using the expanded typology, it is possible that Mr. Rogers would be “mild control/high warmth” or “Democratic” parent.  That would be only mildly ironic for Mr. Rogers, the lifelong Republican.

[4]  This is the element of Rogers’ teaching that produced protests from the Wall Street Journal and Fox News, both of which were shown, but not explored, in the movie.  No Starbucks, remember”

[5]  And I can hardly wait to see Tom Hanks playing Fred Rogers in You Are My Friend, which is currently being produced.