Turning the other cheek

When you come up against a vividly described ethical rule like this, you really need to decide what to do with it. This famous dictum is part of the famous Sermon on the Mount in Matthew 5.

“…but I say this to you: offer no resistance to the wicked. On the contrary, if anyone hits you on the right cheek, offer him the other as well” [1]

The first part of deciding what to do with it is deciding what it “means.” For me, the first part of deciding what it means is trying to figure out what it meant to Matthew because this is Matthew’s own version of the Jesus tradition. The closer I can get to attaching this text to the shape of the narrative as Matthew has constructed it and to the needs of the church for whom Matthew intended this account, the better off I will be when I get to the issue of applying it to myself.

So the first thing to know is that the Sermon on the Mount is a device that Matthew uses to contrast Jesus to Moses. Moses goes up on the mount and brings down the Law; Jesus goes up on the mount (different mountain, of course) and refines the Law’s demands. That is why v. 39 (above) is preceded by v. 38, which cites “an eye for an eye and a tooth for a tooth” as if it were clearly the Mosaic standard. And that is the point Matthew is trying to make: the “old law,” what Moses brought to Israel, is no longer enough and we must now open ourselves to “the new law,” that is, to Jesus.

So the meaning of the new demand, not to resist the wicked, is played off of the inadequacy of the old demand, which is tit for tat retaliation. That’s what it means to Matthew. [2] And if it means that to Matthew, what does it mean to us?

I have a story to tell you that sheds some very interesting light on this question. It is Russell Hoban’s Bargain for Frances. At the core of this story, Frances’s friend Thelma cheats Frances out of her tea set. When Frances finds out what Thelma has done, she returns the favor and cheats Thelma out of the same set. It sounds very “eye for an eye;” it’s a tea set for a tea set. And we need to ask whether that is what Jesus had in mind. Should 5:38, 39 be read to say that Frances ought not to have done what she did?

The Case for Narrow Interpretation

In the case of a Bargain for Frances, it depends on whether the injunction not to resist evil is to be understood specifically and tactically or broadly and strategically. In the tactical understanding, Jesus says that turning the other cheek is the right thing to do no matter what the result is. It is the behavior that is specified. And Frances is clearly wrong by this understanding. She should have given Thelma her sizable collection of teas as well as the tea set.

It is hard, though, to specify behavior NO MATTER WHAT. It is tempting, always, to say that the results of that behavior will be good. Proverbs 25:21,22 does that

21If your enemy is hungry, give him something to eat; if thirsty, something to drink. 22 By this you will be heaping red-hot coals on his head, and Yahweh will reward you.

The good results include shaming the enemy—I think that is what the hot coals are supposed to represent—and also the reward God give you. I think that is also the sequence Paul had in mind when he quotes and expands on the Proverbs text in Romans 12:

19 Never try to get revenge: leave that, my dear friends, to the Retribution. As scripture says: Vengeance is mine—I will pay them back, the Lord promises. 20And more: If your enemy is hungry, give him something to eat; if thirsty, something to drink. By this, you will be heaping red-hot coals on his head. 21Do not be mastered by evil, but master evil with good.

There are the red hot coals again, the shaming of the enemy.

But what if it doesn’t happen that way. What if the results are routinely bad. Or they are not all that bad in general, but are routinely bad in your interactions with a specific person? You are still bound, by the tactical understanding of the text to say what God requires and allows and Frances is required to continue being preyed upon by Thelma.

The Case for a Broader Interpretation

I suggested above that a command like “turn the other cheek” may be understood broadly and strategically as well as narrowly and tactically and it is time to look at that now. So Frances cheats Thelma and gets her tea set back. And Thelma says, “Well, from now on I will have to be careful when I play with you.”  And Frances responds, “Being careful is not as much fun as being friends.  Do you want to be careful or do you want to be friends?”

“Being friends” is not an outcome contemplated by Matthew’s Jesus in the Sermon on the Mount.  In fact, just the phrasing of that outcome sounds out of place in a First Century collective society.   Tit for tat retaliation is rejected. Accepting any manner of abuse is proposed instead, the goal being to give the enemy a chance to be ashamed of himself. Neither of these is the course Frances takes. 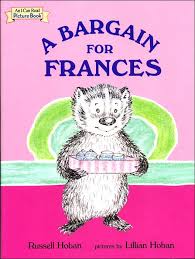 Frances understands eventually what her mother understood right from page 1: Thelma is a predator and Frances is her prey. That is the nature of the relationship—mother gives several examples—and will continue to be the nature of the relationship unless some kind of fundamental change is made.  You could argue, I suppose, that Frances might suggest that they both become prey; that no one take advantage of anyone else. But the only action that is entirely within Frances’s power is to become a predator just like Thelma and that is what she does when she cheats Thelma out of the tea set. And Thelma recognizes it right away. “I see that you, too, are now capable of predation.” That’s what “I am going to have to be careful “means.

But Frances, having brought about parity, offers friendship. That may have been a generous impulse, but it also might have been what Frances had in mind from the beginning. Predator and prey cannot be friends. [3] In making herself a fellow predator, friendship becomes possible. Also perpetual antagonism. Frances offers friendship?

Is that action ruled out by our understanding of Jesus’s teachings in Matthew 5? I think I would say that it is ruled out by the narrow understanding. By that understanding, Jesus specifies a means, not an end and that is not the means Frances chose. But I think it is not ruled out by the broad understanding, in which it is an end that is to be sought and some means is chosen that is likely to attain that end. This understanding imagines that on beyond the shame, the “heaping coals of fire” on the head of the transgressor, there is the hope of friendship. The text certainly doesn’t say that and doesn’t clearly imply it, but why not? After the violator has had a chance to think about what he has done (in the narrow interpretation) or has had it done to him (in the broader interpretation) some new kind of relationship might very well be available. Why not friendship?

I am a fan of the broader interpretation, as you no doubt have noticed, but I am beginning to be willing to say that the strategy I have found to be workable is in fact, available in Jesus’s teaching and, in fact, may be just the kind of faithful adaption to modern society that a modern Christian might favor.

Finally, I am not really surprised to find that there is a very common reading of that text that requires me to hold myself in tension between the text and the practical choices I am required to make. That tension is not the new thing for me. The new thing for me is finding support for that new interpretation in the context of Matthew’s framing of the teaching.

[1] This is the New Jerusalem Bible translation.
[2] It means much more than that, but the fundamental dynamic is set in place with “not that, but this.”
[3] Woody Allen jokes that in our time, when the lion lies down with the lamb (as in Isaiah’s prophecy), only the lion gets back up.

2 Responses to Turning the other cheek