This is a fantasy. If you don’t know me, you might wonder why I would write about what my next job will be. I have retired several times already and my final retirement was five years ago. If you do know me, you know very well that I am not going to take on a new job and would certainly not be writing about it.

And it gets worse.

My “next job” is doing whatever I would be doing in C. S. Lewis’s notion of what Heaven 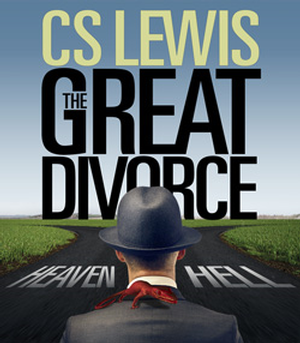 is like. [1] In The Great Divorce, Lewis gives a very interesting account of the Spirits who are in Heaven and who belong there. In Lewis’s version, the Ghosts come up from Hell as visitors—there is a bus every day for that purpose— and are met at the bus stop by the Spirits who are there to help them.

I have spent a lot of time on the Ghosts in The Great Divorce. In 2011 and again in 2014 I taught an Adult Ed class based on it at our church, here in Portland. To give you a little of the flavor, the course was called Seven Characters in Search of Damnation. [2] The Ghosts are quite different from each other superficially. One is an artist, one an Episcopal priest, one a mother (ONLY a mother), one a tough guy employer, one a world-weary cynic, and so on But radically—at their very root [3]—they are the same. They have come to Heaven to try to use God for some purpose of their own.

But I have begun to think recently about the Spirits who meet the several Ghosts at the bus stop.  The work each does is different because each Ghost has a different reason for preferring Hell to Heaven, but deep down—“radically”—they are broadly similar. They offer the same kinds of service.

So if I wound up in C. S. Lewis’s Heaven, those three things would be my job. I would be traveling  up into the mountains, because that is that is the hope and desire of every Spirit. I would interrupt my trip—all those miles would have to be traveled again when I returned—and come back to the bus stop to meet someone to whom I had to make personal amends or whom I was particularly well equipped to help. And I would offer my services to that Ghost for as long as he needed me or, as in the case of the Spirit who was sent to meet the Rights-monger, longer. [5]

Those three things. They would be my “next job” in the world Lewis has built. And if I started in Hell, my first job would be to get on the bus and get off in Heaven and to choose to stay. I guess that’s really three jobs. So it is easier to start in Heaven.

The clearest example of this relationship is the interaction between a Spirit who, on earth, was called Len, and a Ghost who is not given name, but whom I call “the Rights-monger.”[6]  He knows his rights, or thinks he does, and demands that they be honored. [7] In Heaven, where only the grace that God offers matters at all, this is a very costly demand. 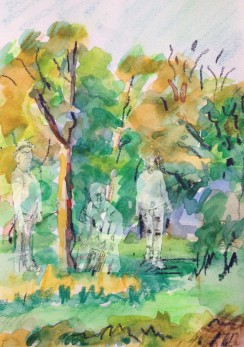 It is also true, in this fantasy, that the Ghosts are completely insubstantial. Picture a column of smoke in the shape of a person. The Spirits are substantial—“real” Lewis says—because Heaven is “real” (substantial) and that difference in the two places mimics the spiritual condition of the two kinds of beings.

One of the characters, whom I have called “the Cynic,” describes the difficulties of Heaven this way.

“That’s all propaganda [that you can stay if you want to]. Of course, there was never any question of our staying. You can’t eat the fruit and you can’t drink the water and it takes all your time to walk on the grass. A human being couldn’t live here.” [8]

In fact, Heaven is the kind of place that you can adapt to if you stay long enough. You solidify as you stay and the result is that you actually can eat the fruit and you can drink the water and the blades of grass no longer pierce your feet—as they did when you arrived because those blades of grass are real (substantial) and you are not. Every Spirit tells every Ghost how that works. It doesn’t work for the Cynic, of course, because he doesn’t stay. “It’s all an advertising stunt,” he says in dismissing the possibility.

Len, the Spirit who was sent to the Rights-monger, has some explaining to do. Once, back on earth, he had killed a man named Jack and Len’s crime looms very large in the Rights-monger’s mind. Here is Len’s account of why he was chosen to come to the bus to meet his former employer.

That’s why I have been sent to you now: to ask your forgiveness and to be your servant as long as you need one and longer if it pleases you.

That is the “job” of this particular Spirit. “Servant” in this context means a lot of very

physical tasks. The Rights-monger cannot simply wander around Heaven on his insubstantial feet, much less begin a journey to the mountains. He will need quite a bit of help and Len is offering it to him. It means spiritual tasks as well, as in asking for forgiveness for the evils Len had done on earth.

On the other hand, one of the conditions in Heaven is that you know a very great deal that the Ghosts do not know and about the previous life on earth, they seem to know everything. Here are some examples.

Rights-monger: What about poor Jack?

Spirit: Here is here. You will meet him soon if you stay.

And there is sure knowledge about Heaven.

Rights-monger: That may be very well for you, I daresay. If they choose to let in a bloody murderer all because he makes a poor mouth at the last moment, that’s their lookout. But I don’t see myself going in the same boat with you, see? Why should I? I don’t want charity. I’m a decent man and if I had my rights, I’d have been here a long time ago and you can tell them I said so.

Spirit: You can never do it like that. Your feet will never grow hard enough to walk on our grass that way. You’d be tired out before we got to the mountains.

And it isn’t exactly true, you know.

Spirit: You weren’t a decent man and you didn’t do your best. None of us were and none of us did. Lord bless you, it doesn’t matter. There is no need to go into it all now.

Ghost: You mind your own business, young man….I’m not taking any impudence from you about my private affairs.

Spirit: There are no private affairs.

This is another aspect of what the Spirit knows. Heaven is a huge and joyous commons, but nothing is private. In Heaven, there is no walling off of the “business decisions” and the “political decisions” and the “family affairs.” Everything is known and grace is available for the acceptance of every act the Ghost is willing to own. When the Spirit says that none of them had done their best, he is referring to a state of knowledge he now has. He is not repeating some especially dour philosophy he held on earth.

The Rights-monger isn’t having any of it. He knows his rights, he says, and he demands what he deserves. Unfortunately, he deserves damnation, which is why he gets back on the bus and goes “home” to Hell.

Lewis has a “guide” in Heaven for the purpose of explaining things he cannot show us by the actions of the characters. In fact, Lewis himself is one of the characters. He is the one to whom the spiritual infrastructure of Heaven and Hell is explained and George MacDonald is the guide. [9] MacDonald puts it this way. 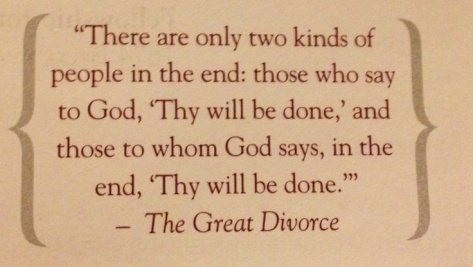 [1] You might be wondering whether I have not skipped a step or two in assigning myself to Heaven, even C. S. Lewis’s heaven, but in fact there are no jobs to do in C. S. Lewis’s Hell, so I had no choice.
[2] Apologies to Luigi Pirandello, author of Six Characters in Search of an Author.
[3] “Radical” comes into English from the Latin radix = root. I often think of “radical” and “superficial” as the alternatives if you have only two alternatives. For reasons that are easier to understand, our word “radish” also comes from radix.
[4] I have half a suspicion that this extra service, service that depends only on the whim of the Ghost, has something of restitution in it. Lewis never says that, but I have my suspicions.
[5] “Monger” is not a combining form used much in American English, although we still say “rumormonger.” A monger is a trader in something. In England, we would know what a fishmonger does. But you can’t trade in “rights” in exactly the same way you trade in fish.
[6] He is, in that respect, very much like the “prisoner of war” in The Mouse That Roared who demands that his food be brought to him on a tin plate at least 10 inches in diameter. He does not know that they have prepared a banquet in his honor and his tin plate functions as a refusal to go to the banquet at all.
[7] Notice the function of “you” in this complaint. It means “one” as the Cynic uses it. “No one,” in other words, can eat anything or drink anything. But obviously, it is the Ghosts who can’t and the Spirits who can. So the use of “you” as the Cynic deploys it is entirely rhetorical.
[8] C. S. Lewis, the author, not the character, credits the writings of George MacDonald as being an important part of his own conversion to Christianity, especially Phantastes, and Lilith.