Jean Paul Sartre published Being and Nothingness in 1943. I was five years old, so I 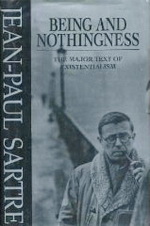 missed most of the early discussions, but as I came to understand it, Sartre argues that life has no intrinsic meaning at all and that the task of existentialists, those who are courageous enough, is to live a life of authenticity. Authenticity as a value has the great virtue of being centered in the self and if there really is nothing else, that is a great virtue indeed.

But if, in fact, there is something else, it would be good to know what it is and how to align oneself with “it”—or him or her or them, if you think ultimate reality has the characteristics we ascribe to persons. [1]

A lot of the broader questions I have heard discussed lately have divided on the question of whether human life as we know it is an I—It kind of arrangement or an I—Thou kind. As a Christian, and most often the only one present for these discussions, I am a champion of the I—Thou model. It is the presupposition of my own faith and of many many others. It is antithetical to non-personal religions of all kinds and to cynicism, which argues that it really doesn’t matter.

I began with Sartre, who, as I pointed out, is way out of my period, so I could make the point that the world in which I grew up—everywhere but home and church—took the non-personalist model for granted and celebrated it. I celebrated it right along with them until I realized that I was committing myself simultaneously to contradictory views. If I am going to hold contradictory views, I much prefer to hold them serially, rather than simultaneously.  It’s less embarrassing.

I’d like to begin with the poem” Invictus,” particularly as it is presented by President Mandela of South Africa in the movie, Invictus, in which Morgan Freeman plays Mandela. “It’s just a Victorian poem,” he tells the captain of the national rugby team, “but it helped me stand up when all I wanted to do was lie down.”

I have great respect for the effect that poem had on President Mandela. I have been affected in that way from time to time. It is a marvelous experience—not always one that feels good—and I am always grateful to have it. So I am a fan of standing up when all you really want to do is lie down.”

I am not a fan of the point of view represented by the poem. I am, as I said, a Christian. I am not the master of my fate or the captain of my soul. The person I associate most with that stance is Adam, the legendary father of us all, who caused us all a lot of grief by taking that position.

But Henley is forced to chose between those polarities because there is nothing in life or in death to trust. If he isn’t “unconquerable,” then he must be “conquered;” if not unbowed, then bowing down; if not unafraid, then afraid. Those are Henley’s options.

But they are not the only options. What if there were someone—Someone, I admit the theistic premise right away—who could say, “I am your Father and I love you with a perfect love.” That gives new meanings entirely to “bowed,” to conquered; and to unafraid. This Father who loves can be said to conquer resistance (if not persons), and the bowing is completely appropriate as an acknowledgment, and the fear is replaced by trust. Those are, from Henley’s standpoint, new options. He doesn’t reject these options. He just doesn’t see them as available. [2]

When you walk through a storm

I didn’t really start this mental trip with” Invictus.” I started with an anthem text by Gerard Marklin. The anthem is called “Do Not Be Afraid” and it has this line in it: “When you walk through the waters, I’ll be with you.” I guess that was close enough for one nerve ending to make a post-synaptic recommendation to another and I remembered “When you walk through a storm,” from Rogers and Hammerstein’s Carousel (1945)

It is not clear to me just why Julie will never walk alone. Will her husband Billy Bigelow, who killed himself, be walking with her? Will Julie’s cousin, Nettie Fowler, who sings this song to her, be with her? It says to have hope in your heart, which seems like a good thing, but what is one to hope for? Is an unspecified hope, a hope with no home, enough to keep you from being alone? It doesn’t seem like it, but this was the mid 1940s and maybe “hope itself”—hope with no clear referent at all—was thought to be enough.

Do Not Be Afraid

Marklin’s text, in “Do Not Be Afraid” provides a context for the hope and that is where the tears started running down my face. (See the full text at the end of this post or, if you prefer, hear it here.) It is a richly considered hope, fully as Jewish as it is Christian, and it has these elements. [3]

I am your Father and I love you.

I will be with you.

You will walk through the waters, but they will not cover you.

You will walk through the fire, but you will not be consumed.

You will encounter the fear on loneliness, but you will not forget that I am with you.

You will dwell in exile, as a stranger dwells, but you will remember that you are precious in my sight.

Marklin uses half of a family metaphor, a half that matters a great deal to me. But here, I am going to add the other half because I think they make sense together. [3] I will call you by your name, says God in the passage (Isaiah 43) Marklin has in mind. But God also says, “I will call you by my name.”

I can’t help thinking of these as phases of development, although I know it isn’t really 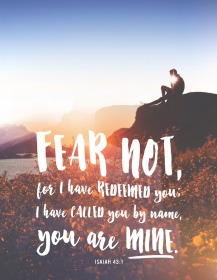 It is that identity that marks off the I-It world celebrated by “Invictus” and by “When you walk through a Storm” from the I-Thou world of “Do Not Be Afraid.” I think the virtues claimed in “Invictus” are indeed admirable, by contrast to the alternatives that are considered. But there are, in this other world, alternatives that cannot be found in that world. Who, really, would choose simple indominability, if one could be truly known and truly loved?

[1] Ultimate reality “is personal,” I would normally have said, but this is a mixed audience and there is no harm is trying to communicate clearly, even if it does, on occasion, require a few extra syllables.
[2] Or maybe he sees them as available and contemptible. I don’t know that much about Henley.
[3] Conceptually, they belong together—belonging and being known are part of the family metaphor. But I think there is also a historical upgrade here. The context of the early passages ( 2 Chronicles 7 and many other citations) is that we are known by His name. We took His name in becoming part of the family. It is very collectivist. But this is an individualistic time and to say that He calls us by OUR names is the other part. He knows our names. He knows who we are. And in Revelation 2:17, the metaphor is extended even further: “I will give you,” says God, “a new name—a name only you and I know—the truest name you can have.”
[4] There is no way to make too much of this. In the ancient world, the name was the whole being. “Know your name” and “Know who you really are” can be considered equivalent expressions within that understanding of “name.”