Thank goodness there is no “right way” to watch a solar eclipse. And I think a lot of people felt that way. It didn’t seem to me that up on the roof, the part of the 16th floor, which surrounds the inner rooms, there was the kindof gentle correction that goes on about most things here.  People who live here have lived a long time and most of us have some idea about how things ought to be done.  I think it is gift we share with each other that we don’t talk about it all the time.  We did that really well today.

So people came up the the penthouse to watch whatever was going to happen. Some sat in the auditorium and watched the coverage on television and that was fine. Some people came up from the assisted living floor who looked like they were glad to be part of the general population for awhile.  Most of the rest of us milled about next to the east wall of the roof area and chatted about all kinds of things–sometimes including the eclipse. 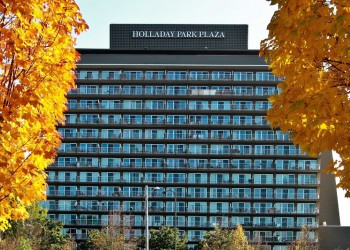 Even if you went up to the 16th floor for the purpose of watching the solar eclipse, you found a lot of competing claims on your attention. Here are Holladay Park Plaza (a really good senior center on the east side of Portland, Oregon) we make a lot out of events. So there was a whole table full of edible puns for us to enjoy. There were the dark Oreo cookies set on top of the light Oreo cookies. There were Starburst candies. There was a large container of ice and water sitting next to a large container of ice and a dark tea of some sort. [1] There were Sun chips, cut-out cheese moons, that you could mount on dark crackers. You could eat away the whole eclipse time if you wanted.  This shows the roof from the west.  We were up there just on the other side of the brown sign.

There were groups of people sitting or standing together—all with the correct eye gear—and facing in the direction of the rapidly diminishing sun. Some looked at it as if it were interesting; others as if it has somehow been an assignment. Most engaged in a conversation that could have taken place anywhere and interrupted the flow of conversation with an occasional glance at the event. I think those are all good ways to enjoy the eclipse.

I have no idea why the first bit the shadow took out of the sun happened at the upper right “corner”—you know what I mean. Or why the last little bit of shadow exited at the lower right corner. It intrigued me.

And I hadn’t thought of how different the quality of light falling on the earth would be, but of course it would be different. My son, Dan, called during the event and said it looked to him like the sun at evening and as soon as he said it, it started to look like that to me as well.  A lingering dusk just before noon.

From the roof, we watched the traffic on the interstates thin out—but not slow down—as 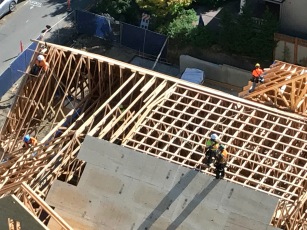 if only a few people felt that nothing was going on that needed their attention. We watched the construction of the building just east of us slow down and then stop entirely. It was still light enough to see how to cover the rafters with big sheets of plywood, but maybe a little break in the action would be appreciated.

I heard conversations from people who were still very much engaged with the previous solar eclipse, as if that one was somehow more real and more vivid in their minds than the one that was going on at the moment. That struck me as odd at first, but then I thought that we all linger over those parts of our lives that continue to engage us and we don’t necessarily privilege the insignificant things that are going on right now over the truly significant events of a decade or so ago.

I heard conversations that bore passingly on the fact that there will not be another total eclipse that can be viewed from this part of the country until 2169. “So this will be my last one,” is a line I heard, in one version or another, several times and one I said to myself several times.  Will I see the Cubs win the pennant again?  Will I see Roger Federer win another major?  I think there is a time I would have considered hearing or having these thoughts to be morbid, but now I know they are just another form of calendar. 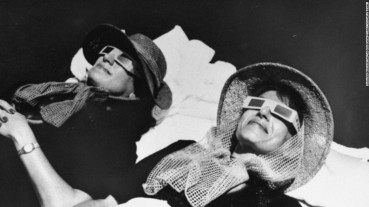 I found myself interested in whether people would think of the closest approach to totality as the end of the show or the intermission. I thought it would be fun to watch when the general exodus began. It began almost as soon as the bright crescent of the sun started to increase again, but by that time, I had thought how many other variables ought to be considered. A lot of people had been sitting out in the sun for a long time by then. Quite a few had been standing for awhile by then. The restoration of the sun may not have seemed all that different from the occlusion of the sun; not that much to hang around for.

I watched it for a long time, but when I caught myself wondering how many minutes it would be until the shadow exited the sun’s surface entirely, I realized that I wasn’t fully engaged in it anymore and very shortly after that, it occurred to me that it would be fun to write a short blog about the experience.

[1] It took almost no prompting at all to get the organizer to begin referring to the dark tea as Totali-Tea and to the water, right next to it, as Near Totali-Tea.

2 Responses to The Solar Eclipse at Holladay Park Plaza