A staff you can lean on

Nobody ever accused President Jed Bartlet of being too candid as President over his seven years of presiding over The West Wing. On the contrary, the hits he took in public were about being too distant, too intellectual, too removed from ordinary life. That is not an entirely unfair characterization of him, but it passes over the other part—the passionate, angry, vengeful president.

But for that, he had a staff. [1] I am going to come, shortly, to President Trump’s 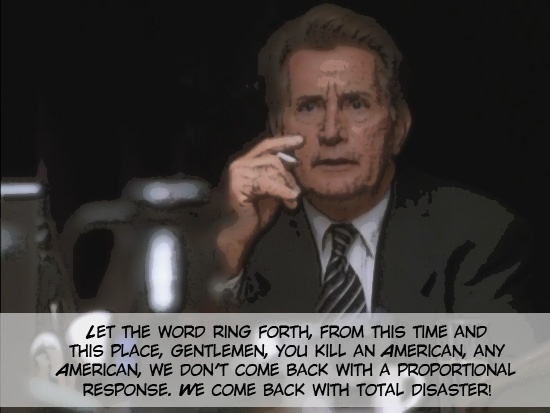 belligerency about North Korea, including both “fire and fury like the world has never seen” and “not tough enough.”  And now, since I wrote those, to “locked and loaded.”  But let’s start with President Bartlet and work back.

In Season 1, Episode 3, “A Proportional Response,” the Syrians shot down an American aircraft. Bartlet was furious about the attack and even more furious about the routines that his military had developed for dealing with such things. These routines did not express the depth of his anger, nor did they assuage his desire for revenge. Here is Round 1 with his military and diplomatic staff in the situation room. Admiral Fitzwallace is the Chairman of the Joint Chiefs of Staff.

BARTLET: Then I ask again, what is the virtue of a proportional response?

FITZWALLACE: It isn’t virtuous Mr. President. It’s all there is sir.

BARTLET: It is not all there is.

FITZWALLACE : …pardon me Mr. President, just what else is there?

GENERAL: Are you suggesting we carpet-bomb Damascus?

BARTLET; General, I am suggesting that you and Admiral Fitzwallace and Secretary Hutchinson and the rest of the national security team take the next sixty minutes and put together a U.S. response scenario that doesn’t make me think we are just docking somebody’s damn allowance!

You couldn’t ask for more fury than that. He is angry and he has the power to punish and he wants to use it. But then an amazing thing happens. In Scene 3, President Bartlet returns to the Situation Room to hear about the new plan. He gets the new plan—and also an assessment of what this plan will look like to others.

Bartlet: You called me?

FITZWALLACE: Yes, sir. Mr. President we put together a scenario by which we attack Hassan airport…. I think Mr. Cashman and Secretary Hutchinson would each tell you what I’m sure you already know sir. That this strike would be seen at home and abroad as a staggering overreaction by a first time Commander in Chief. That without the support of our allies, without a Western Coalition, without Great Britain and Japan and without Congress, you’ll have doled out a five thousand dollar punishment for a fifty buck crime, sir.

And there are reasons why it is a mistake. There would need to be a “Western Coalition” 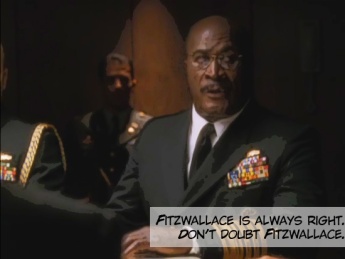 to support the kind of response the President is talking about. Bartlet just wants to hit back. There has been no engagement with Congress, not even the famous “Gang of Eight.” [1]. Nothing with Great Britain or Japan. There has been no foreign policy preparation at all and only a rookie President would act militarily in such circumstances and this rookie President if very fortunate t have someone who will tell him that.  The caption is from a Fitzwallace fan.  He didn’t have a nameplate that said that.

Bartlet is stopped by his staff. He is still angry and more will have to be done before he addresses the American people that eventing. That additional work is done by Leo McGarry in the Oval Office and when he is done, Bartlet is able to give a public voice that sounds like this.

BARTLET: My fellow Americans, good evening. A short while ago I ordered our Armed Forces to attack and destroy four military targets in Northern Syria, this in response to the unwarranted, unprovoked, and cold-blooded downing three days ago of an unarmed Air Force jet carrying 58 passengers and the flag of the United States.

It took some doing, but he got there.

It is widely thought that no one in the Trump administration would be able to stand up to President Trump the way Admiral Fitzwallace stood up to President Bartlet. This places the contrast between these two residents of the Oval Office in an odd relationship to each other. 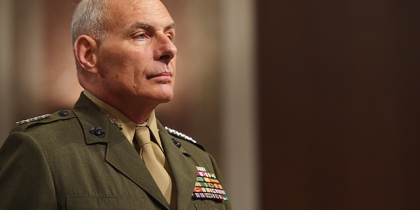 For example, it is not a difference of public and private person. Bartlet was as angry in this narrative as Trump is today about the threat of North Korea. It is not that Bartlet successfully muffles his anger, determined to act like a president, rather than like an avenger. Taking this scene as a fair instance of his early presidency, he “muffles his anger” no better than President Trump is reported to.

But President Trump has not yet appointed anyone to play either role. John Kelly’s role–that’s Kelly in the picture above– appears to be to keep everyone else in line. It appears to include General John Dunford, the current Chair of the Joint Chiefs of Staff—the role Admiral Fitzwallace played in the TV narrative. And there is no setting where this could occur. President Bartlet convened the members of “national security team” to give him a report in the Situation Room. No one is convened at the site of President Trump’s 3:00 a.m. tweets.

So it appears that the setting is not there. It may be, as they say, that no one wrote the “fire and fury” line for him, but he has been rehearsing it for awhile now in angry outbursts with his associates. None of the associates seem to have found a way to say what these experts, see below, are saying, according to CNN.

Trump’s comment, which came shortly before North Korean officials threatened the United States territory of Guam with missiles, was criticized as too bellicose and direct by national security and defense experts who argued any conflict involving nuclear weapons called for calm and reserve.

So the setting is not there and as nearly as we can tell, the people who can utilize their expertise to move toward “calm and reserve” are not there either. Every president I have seen so far, and that list begins with FDR, has found a way to adapt himself to the Presidency. “It sobers you,” said recent President Barack Obama.

But it may have inebriated President Trump. If he has developed, as many think, a habit of saying what people tell him he shouldn’t say, that means one thing in a radio interview. It means not much more in a TV show that features him firing people. It means somewhat more when it comes to ethnic slurs and predatory comments about women. 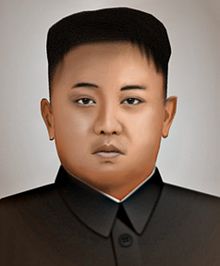 purpose of dealing with other heads of state, some friendly, some hostile, then he needs a strong staff in the very worst way. And he shows very little inclination—General Kelly is a possible exception—to appoint any. The recent televised cabinet meeting at which each secretary was given a chance to say what an honor it was to serve in the Trump administration, does not bode well for anyone giving the President good advice.

Let’s hope that Kim Jong Un is being better served by his staff.

[1] There is debate about the origin of the term “staff,” to refer to the people who serve you in some way. Everyone agrees the staff = “stick” in some sense, but one group believes it is a stick something like the baton that officers carry, while others think it is a stick more like a shepherd’s staff and that the joke is that the staff are the people you can lean on. I don’t know which is correct but, obviously, I prefer the one with the joke in it.