So many kinds of things go on in a Protestant worship service. [1] Calling it “a worship service” is almost a courtesy, but I like the term because it expresses our highest hopes about what we are doing there. Or maybe only the best hopes we remember having.

So “worship service” might almost be called a term of aspiration, rather than of description. It is not so much what we do as what we aspire to. What we actually do might be better described as a variety show. There are “acts” of all kinds to suit all sorts of tastes. There are the high holy moments and the low holy moments. The attention of the congregation comes together in a sharp focus, then drifts away. [2]

I’d like to explore this notion by considering three moments in the recent worship services in my church, the First Presbyterian Church of Portland, Oregon. I don’t mean by choosing these three to imply that other important things were not happening. There may have been a challenging sermon on that morning, or the reading of a thought-provoking scripture, or a children’s sermon that engaged the children and that had an additional track of meaning laid down for the listening adults.

I am choosing these three things because they are like the beds in Goldilocks and the Three Bears. One is too hard and one is too soft and one is just right. [3] I want to look at the Prayer of Confession, at the Affirmation of Faith, and at our common recitation of the Lord’s Prayer. And so you won’t need to maintain the suspense, the affirmation of faith is too hard, the prayer of confession is too soft, and the Lord’s Prayer is just right.

The Affirmation of Faith

We use quite a few different texts in our service, but recently, we have been using the Confession of 1967. The Confession of ’67 was not intended to be read in unison. It is not well-adapted to that use and we do it very badly. In addition to that, it is used as an auxiliary sermon—not to give us a chance to say what we believe, but to tell us what we ought to believe.

Here’s part of the section we read last Sunday.

The institutions of the people of God
change and vary as their mission requires in different times and different places
The unity of the church is compatible with a wide variety of forms,
but it is hidden and distorted when variant forms are allowed
to harden into sectarians divisions,
exclusive denominations, and rival factions.

Compare that, just to get the flavor of the two, with the first and last lines of the Nicene creed:

I believe in one God, the Father Almighty, Maker of heaven and earth, and of all things visible and invisible….and I believe one holy catholic and apostolic Church.. I acknowledge one baptism for the remission of sins; and I look for the resurrection of the dead, and the life of the world to come.

The Confession of Sin

On the other hand, the our church—that includes the people who write the prayers by

which we confess our sins together—have not been able to find a form for that confession. The old style (a very attractive example follows)  was bold and without any amelioration at all. “We have sinned in thought, word and deed.” Not much wiggle room there. “We have done that which we ought not to have done and we have left undone those things that we ought to have done.” So again, nowhere to hide.

Here is one from a recent week. It seems so beautiful to me that it is hard for me to say it aloud.

Gracious God, our sins are too heavy to carry, too deep to undo.
Forgive what our hearts can no longer bear.
Set us free from a past that we cannot change;
open us to a future in which we can be changed;
and grant us grace to grow more and more into your likeness;
through Jesus Christ, the light of the world.

It is meant to be read together and you see how congregations are invited to do that by parallels like “too heavy to carry” and “too deep to undo.” The admissions are bold, but then, so are the remedies. “Set us free…” and “open us to a future” and “grant us grace” are sweeping. The theology is orthodox. The appeal of the words themselves is enticing.

Despite my radically individualistic upbringing, I find I like that uncompromising tone. It bookends nicely, for one thing, with the Affirmation of Faith, in which we “confess” those things we aspire to believe whether we actually do at the moment or not. In the Confession of Sin, we “confess” to sins as we imagine a just and holy God sees them. We ourselves, might have seen them as “failures to communicate” [4] but in the phrasing of the confession, we are prepared to see that God sees them as more fundamental and more destructive.

But that use of the confession makes the little qualifications we often put in seem unworthy. We say, “We have sometimes failed….” and “We have not always trusted…” and some Sunday soon I expect that we will be asked to pray “We have not lived up fully to Your expectations.”

People have apparently felt that the traditional form of the confession is not empirically valid. Either it is not true that that we have sinned in thought, word, and deed, or that description does not recognize that there were instances when we did not fail in thought, word, and deed. And that would have us confess an “untruth,” which surely God does not demand of us. [5] Right.  But it seems to me that confessions of principle, of sin as such, are only made to look ridiculous by being qualified with date stamps.

But we do say the Lord’s Prayer. We don’t understand it, but we do say it and the experience of being a part of a congregation united in the saying—that means a great deal to me. For me, that is the third Goldilocks bed: it is not too hard or too soft. In fact, the hardness or softness of it doesn’t really bear on my appreciation of it at all. It isn’t always the meaning of the Lord’s Prayer that moves me in the Sunday service; it is the experience of all of us saying the same thing in the same way at the same time.

It isn’t a visual experience. If it were visual, I would have to choose between seeing the 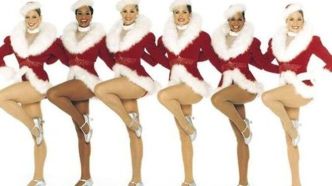 unity—as if I were watching the Rockettes in New York and marveling that they kick exactly the same kick at the same time—and being a part of the unity. If it’s visual, you have to do one or the other. The saying/hearing the Lord’s Prayer is aural. Not only can you say it and hear it—hear yourself as one of many—at the same time, but you can try to approximate the way you say it to match the way you are hearing it. [6]

Our congregation stumbles a little at the beginning because our various leaders in worship lead into the Lord’s Prayer differently. Some say, “the prayer that Jesus taught us to pray”—pause (maybe a fifth of a second)—“Our Father….” Some use different introductions. Some don’t pause at all. As a result, we, the congregation, don’t normally catch the common rhythm at the beginning but by the end of the second phrase “who art in heaven,” we are together.

And we continue together. We break between phrases whose meaning requires a break. We break between phrases whose meaning requires continuing the thought. But we break at the end of each phrase and we break for the same length of time and we sound (to me) like one voice. [7] It’s hard to say just how long the breaks are. I would guess they are between one tenth and one fifth of a second, but whatever they are, they are the same each time.

We are an extraordinarily diverse church. This is really the only thing we do in unison. It feels healing to me in part because I know that an hour ago people differed sharply from each other on what the words “my brethren” means in the phrase, “the least of these my brethren.” They still disagree about that and will for years to come, but here they are in the worship service, pausing between “Thy Kingdom come” and “Thy will be done” in perfect unity.

[1] I am limiting the topic drastically, but I haven’t experienced very much outside Protestantism.
[2] That’s not a complaint. Allowing your attention to drift, while you are in a competently run worship service in a beautiful building with familiar and well-performed music is not at all a bad thing. It isn’t everything.
[3] I’ve never been happy with the way Goldilocks’ own preference for mattress firmness was ignored. The story is told as if it were all about the beds, when in fact, Goldilocks’ experience is the product of her preferences and the condition of the beds. Or, as my grad school mentor, Jim Davies, used to put it: B = f[P,E].
[4] Thanks to Cool Hand Luke for that enduring and widely shared expression.
[5] It has been some time, I imagine, since the people making this objection have looked over James, Chapter 2, which contains this gem: “10You see, anyone who keeps the whole of the Law but trips up on a single point, is still guilty of breaking it all. 11 He who said, ‘You must not commit adultery’ said also, ‘You must not kill.’ “
[6] That’s what I try to do. I have passed through two other phases. In the one, I tried to say it as a personally meaningful phrasing, saying it so that it sounded like me. In the other, I tried to say it in a way that “brought out the meaning,” whether anyone else was saying it that way or not. I now reject both of those, except when something in the service has seriously pissed me off.
[7] Every now and then, we get a worship leader who conceives of his or her job as teaching the congregation how it ought to be said. The most common crisis is between the phrase “And forgive us our sins” and “as we forgive our debtors.” Some worship leaders think that the contingent relationship, as they imagine it, between the two phrases ought to be stressed, so instead of breaking between the phrases, the just retard a little and continue the thought. The cost to the unity of the congregation’s voice is high, of course, and the value in significance gained in minuscule—particularly since, as Matthew has it, the “forgiveness” is a one time action.