There is more to this story

Does this illustration remind you of anything? It reminded me of that whirlwind survey of the relationship of Carl and Ellie Fredericksen, with which the movie, Up, begins. They are little children, they are lovers, they are spouses, then he is a widower. That’s where the narrative of Up actually begins; Carl is a dispirited old man, the one in panel 5, still grieving for the loss of his wife.

If this picture doesn’t more you in the direction of thinking about life and death, I can’t imagine what would. Take just a moment to notice the trees. [1] And then the people—tallest in panel 3, you notice. The sizes grow toward 3 and recede from it. And look at the relationships. Playing with balloons, then holding hands, then embracing ecstatically, then standing companionably.

And then consider the direction, thinking of this sequence as a narrative.  You pass this way but once, the picture says. You go from left to right and then you are done. As much as I love this picture, I am going to have to offer an amendment. It is true that you can’t go from 5 to 1, but you can go from 5 to 2. [2] There are parts of this sequence, in other words, you can do more than once.  Everyone who has happily remarried knows that.

In fact, I think I would go so far as to say that “getting to do it again,” i.e. leaving 5 behind and going back to 2 gives you a whole new appreciation for 2. You know, for instance, that it is going to go away and you need to celebrate it while you have it. Or, as it feels at the time, while it has you.

This brings me right up to the lip of a column M. Craig Barnes wrote in the June 21 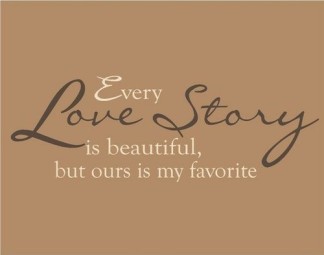 issue of The Christian Century. That’s where I am going next, but I want to make one final point about arriving at 2 (after having experienced 5).  When you know you can’t keep it, there are several things you could do as a response. You could devalue it. “Because it won’t last, it isn’t really that important.” You could strain to hold onto it. “I want to feel this way for as long as I can.” Or you could just enjoy every second of it, knowing that won’t last.

New friendships, after all, don’t last. Either they go away or they become old friendships. In neither case do they stay what they were and if you are going to enjoy them fully, you need to know that your pleasure in them doesn’t need to be diminished in any way by your knowledge that it won’t last.

Craig Barnes’ column is called “The temporary gift of marriage.” His way into this question is different from mine. He has entered it as a pastor, engaging many couples in counseling before their marriage. I entered it as an unwilling participant when my wife died in 2003. [3] I think those two ways of coming to the question account for our somewhat different understandings of it.

Even so, I agree wholeheartedly with the main inference he draws from the “temporariness” of marriage, which is that it needs to be celebrated and appreciated in every moment. I remember when that occurred to me with some force in 2013 when I wrote “Borrowing Bette.” [4]

So Barnes’ advice to Mike is sage and wonderful advice:

I say give her [Sue, his fiancé] up today. …That way, every morning when you find her next to you, you can rejoice in the temporary gift you can still enjoy.”

Whatever helps Mike rejoice every morning that Sue is next to him in bed is a good thing. Denying that it is important on the grounds that it is not permanent is not helpful. Any marriage, even a very good marriage, is temporary. See Panels 5 and 6. Failing to appreciate it because you are riven with anxiety about losing it is also not helpful. Whatever occasions the rejoicing that she is still there…that is what is helpful.

So I enjoyed the column thoroughly. On the other hand, as I said, I have come at it differently than Barnes did and I think that shows in the two remaining points I want to make.

With reference to the first, Barnes says:

Young people often assume that the funerals for old lovers are not so difficult, as if the weeping person in the first pew is thinking, “Well, we had a good run.” To the contrary, the better the marriage the harder it is at the end.

But that is exactly what Marilyn and I said to each other during our last two years together. We reflected on our time together in a way you really don’t take the time to do when you imagine there will be a lot more time. We looked back on it as a bounded and finite time, like a spectacularly successful Broadway play, and we said that we had had a wonderful “run.” [5]

The second point is that I don’t have any experience at all of putting my wife in God’s hands. I don’t have that experience with Bette; I did not have it with Marilyn. I want to go back now to the advice to Mike, which I liked so much, and to pick up the part I left out. Here is the whole quotation with the deletion in bold.

“So why do you want to go through all of that?” I asked. “I say give her up today. Give her back to the Creator who made her, sustains her, and to whom she will always belong. Get the grieving over with before it becomes unbearable. Let God hold her. That way, every morning when you find her next to you, you can rejoice in the temporary gift you can still enjoy.”  The distinction the poster makes between belonging “to” and belonging “with” is crucial.

I am fine with the theology of the sentiment in the Christian Century column, but I have no experience with it at all. I had the clear sense that Marilyn did not “belong to” me and, as I said in “Borrowing Bette,” I have that sense of Bette now. Maybe the experience—not the doctrine, but the experience—of the loved one “belonging to God” requires more mysticism than I have. Or maybe it is a religious phrasing of an experience to which I have given secular names.

I don’t know which of those it is or whether it is something else entirely; something that has not even occurred to me. But here is what Craig and I both know. You can’t hang onto it and you shouldn’t try. And, rather than trying to prolong it, it is better to invest yourself fully in the appreciation of it today. If Mike and Sue heard that, their time with their pastor was time well spent.

[1] I don’t know why the left side of each is sheared off. They looked like trees that have adapted to a consistent wind from the west to me. It was Bette who noticed that the left edge is as straight as a ruler.
[2] I did that. Panel 2 is a generalized representation of my first date with Bette. We sometimes remember to celebrate our wedding anniversaries, but we always remember to celebrate the anniversary of that first date. And although the relationship did become a 3 and is becoming a 4, it began as a 2. I was at 5 when Marilyn died, but after a year or so, 2 happened to me.
[3] I am not eager for Dr. Barnes to come to the topic the way I did because he is married to my daughter.
[4] I liked the title because those of our friends who read it would roll their eyes, knowing that Bette is a librarian and enjoying the pun; and those who didn’t know that about us would read on innocently.
[5] Marilyn and I were both in our 60s when we reflected on our several decades together. Mike and Sue, the couple in the Christian Century column, were probably in their 20s and this was a first marriage for each of them. Those differences probably help account for my different perspective.

Here is all you need to know to follow this blog. I am an old man and I love to think about why we say the things we do. I've taught at the elementary, secondary, collegiate, and doctoral levels. I don't think one is easier than another. They are hard in different ways. I have taught political science for a long time and have practiced politics in and around the Oregon Legislature. I don't think one is easier than another. They are hard in different ways. My wife, Bette, is the First Reader (FR) of the posts. I have arranged that partly because she helps me write better posts than I would otherwise and partly because I can hold her responsible for the mistakes that I would, otherwise, have to own up to myself.. You'll be seeing a lot about my favorite topics here. There will be religious reflections (I'm a Christian) and political reflections (I'm a Democrat) and a good deal of whimsey. I'm a dilettante.
View all posts by hessd →
This entry was posted in A life of faith, Getting Old, Words and tagged be anxious for nothing, carpe diem, in love again, in love with your spouse, one relationship cycle. Bookmark the permalink.

2 Responses to There is more to this story