At least cursing the darkness is a systemic response

My friend, Bill Teague, is a pastor and a husband and a father and a really good guy. Also a blogger. Abusing the prefix e- in a way I have enjoyed since he first started doing it, he calls the blogs he writes for his congregation in Langhorne, Pennsylvania, “e-pistles.” How cool is that.

On June 2, Bill led with this cartoon and a sustained argument against “darkness cursing.” I feel a lot of the same things Bill feels, but when I read the column, my mind went off in a different direction. So, with my thanks to Bill for a good column, I would like to pursue that other direction this morning.

As you may have gathered from the title I chose, I noted that the darkness is a general and systemic condition.  Lighting a candle is a personal and episodic response.  The candle might help you and yours as long as the wax and the wick hold out, but after that, the system reasserts itself.  Lighting a candle is temporary in the same sense that Wiley Coyote’s levitation is temporary.  Once he notices that he has run out of cliff, he plummets the way a heavier-than-air body should.

private and public.  And when I had gotten that far, I heard George H. W. Bush’s “thousand points of light” speeches (one in accepting the Republican nomination and one in his inaugural address) in which he advocates private activity rather than public (political) activity.  Or possibly local rather than national.

I’m going to complain in just a little bit that there is no reason to thing of these two responses as mutually exclusive, but staying a moment longer with one or the other, we could ask whether lighting candles is ever going to get the lights turned back on. [1]  If the issue we face is that is dark and we need to continue the game until the last hand has been played, candles are more than adequate.  If you need a candle to find the fuse box, it will serve that purpose.  If the landlord has turned off your lights, you might need a candle to find the phone or maybe your collection of spray cans.  If it is dark because it is night, you might just as well go to sleep.

On the other hand, there is no reason why you couldn’t light the candles and curse the darkness at the same time.  I suggested above that there was no reason the two responses needed to be mutually exclusive.  Now I want to go further and say that in many cases, they are natural partners.

I’ve spent a lot of time in the last forty years thinking about the relationship of public to private problems.  I once taught some students who, in another class in another department long long ago, were unacceptably touched by a professor.  Every one of those young women chose the “light one candle,” that is the private episodic approach.  That spared the women who were good at it; it didn’t do very much for the women who were not good at signaling their displeasure.  It did nothing at all for  the women who would be in that class next semester and the semesters after that.

The professor (and the administration which may or may not have known what was going on) were not formulated as the problem to be dealt with.  It is not a general problem, like the darkness.  And it is their problem, theirs as a group, not an isolating problem experienced one woman at a time.  They became, to use a term that is dear to me, “the community of the problem.”  That means more than that they all faced the same situation.  It means, in addition that they had formulated it as the same problem, a common problem, and in doing that, they because a resource for each other. 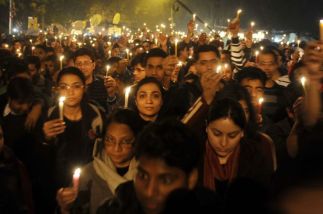 I am loading these examples in favor of cursing the darkness, but if cursing is all you do, it is even less effective that lighting a candle.  The question the private response/public solution formula gives us is this: what do you do if the only meaningful resolution of the issue is systemic.  No changes, in other words, that are less that systemic will help.  Unless something like this assembly of candles means something.

If the problem is how the system acts–the climate as a system, the forest as a system, the loss of trust in a social system [3]–private and episodic responses are not a good response unless they build toward a social response.  And sometimes they do.  That’s why I said there are circumstances in which they are natural partners.  When the lighting and the cursing lead to a group of angry citizens who can see what they are doing, some really good things can happen.  Even some systemic things.

So, finally, with one more apology to my friend Bill Teague, whose essay started me off on all this, it is possible to conceive of “one candle” as one step toward a systemic solution.  This step may not make anything better for you in the way having a personal candle in the darkness would.  This small step toward a systemic solution might have no detectable effect at all.  But if the goal is to generate the resources that require the system to change, each small step in that direction, however dim it might seem at the time, is a step toward addressing THE problem, not just your problem, and it is worth doing.

[1]  It matters, of course, just why there is all this darkness.  It matters particularly whether the causes are natural or social.  But there is only so much you can ask of an aphorism, especially after it has been celebrated in a comic strip.

[2]  The administration, confronted by a substantial number of women all cursing the darkness at the same time, summoned the professor and explained to him the realities of tenure in an academic setting.

[3]  See Francis Fukuyama, Trust: The Social Virtues and the Creation of Prosperity.  In a “low trust society,” Fukuyama says, a tax is levied against every social transaction.  Yup.