As I write this, it is just after noon in Dublin, where I had breakfast yesterday.  It is just after 4:00 a.m. in Portland, Oregon where, when Starbucks opens, I will have breakfast today.  My mind is still full of Ireland, where I have spent the last two weeks.  It is still way too early for me to understand what I saw, but some small anecdotes and a few images come back to me and I would like to think about them this morning.

Let’s start with the symbol(s) of Ireland.  Although the popular color of Ireland

While I saw people drinking Guinness stout all over Ireland, most of the Guinness stories I heard, I heard in Dublin.  If there is a better picture than this one, with the Irish shamrock displayed (see below) in the head of a draft Guinness, I have not seen it.  I didn’t even know they could do that.

The harp has been a traditional Irish instrument for a very long time, but I think it has a special status because the English domination of Ireland included a determination to obliterate Irish culture and playing the Irish harp was declared to be a capital crime.  When I saw the intensity of Ireland’s love of its harp and of traditional Irish music generally, I realized I was seeing more than just a tradition-loving people.  I was seeing an indomitable people.

Ireland is in a very good place right now.  They have levels of wealth they were

not prepared to have–not, everybody assured me, “like the Celtic Tiger years of the 90’s–and a stable socialist democracy that is not dependent on England.  It is dependent, however, on the European Union (EU), which funded the Celtic Tiger 90s, and Irish news pays a great deal of attention to the EU.  I heard speculation of what the EU flag would look like –the ring of stars on a field of blue–when the U. K. withdraws.  There may have been just a little glee mixed in with the speculation. 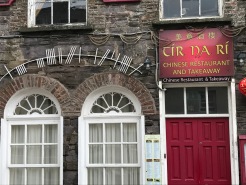 When I travel, I am often taken by signs that catch my interest.  I had never heard, for instance of the earliest written Irish script, called Ogham (and pronounced ōm).  It is just a series of lines representing letters of an alphabet.  But that makes this sign in Dingle–Chinese take-out, no less–a four-language sign.  Even in Ireland, where two languages per sign are common, this was  worth a good laugh. [1]

There is nothing at all subtle about this statue of Molly Malone in Dublin.  It was hard to get a picture of just her–people wanted to have their pictures taken with her as background and who could blame them.  On the other hand, if you know the traditional Irish song “The Rose of Tralee,” this picture might catch your fancy.  This (see footnote 2) is a rose IN Tralee.  We stopped there for dinner on our way back to Adare and I couldn’t resist it.

I saw more redheads in Ireland than I have ever seen at one place.  There was an attempt in Portland to break the Guinness (!) Book of Records for the most redheads in one place and one time and I contributed my redhead to that cause, but I didn’t actually see the gathering itself.  It will not surprise you that there are a lot of redheads in Ireland, but this one, in Ennis, is named Éowyn and I sincerely hope there is a Faramir somewhere in her future.

Nearly everyone notes how incredibly green Ireland is.  That didn’t impress 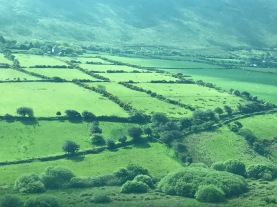 me all that much because I am, after all, from Oregon and we do green as well as they do. [3]  But nothing in Oregon suggests the division of all that green into very small plots of land marked by rock walls or, as here, by hedges, and you see that all over the parts of Ireland (south and west) we saw.

I don’t know yet how to think carefully about the role of foreign (English) domination in Ireland.  Maybe that will come to me in time.  Many of the stories we heard had the “and this is what they did to us” theme.  The other theme was “but that didn’t stop us from demanding the right to be Irish.”  And a lot of the excesses that are part of the caricature of Irish life–the hot tempers and the drunkenness and the violence–can be placed within this cultural narrative and maybe that is the way the Irish see it. [4]

This very brief two-week glimpse of Ireland is all I have to go on.  I might have to go back or maybe, you know, read something.

[1]  The Ogham marks are at the far left.  The red part of the sign contains Chinese characters, and information in both Gaelic and English.

sources.  “Culture” is just things everyone knows and the elements of it don’t come with labels attached.  I got a quick lesson in Ireland about how very much of “my culture” is Irish.

[3]  I am also a University of Oregon alumnus, so green has a special meaning for me as well.

[4]  When I was in grad school, there was a faux Latin motto, Illegitimi non carborundum, which was translated, “Don’t let the bastards wear you down.”  That would serve the Irish very well if “them” meant the English.

2 Responses to Reflections on Ireland, 2017